Old school must be demolished to make way for new 'community services hub' on site
Feb 4, 2019 4:45 PM By: Dave Dawson 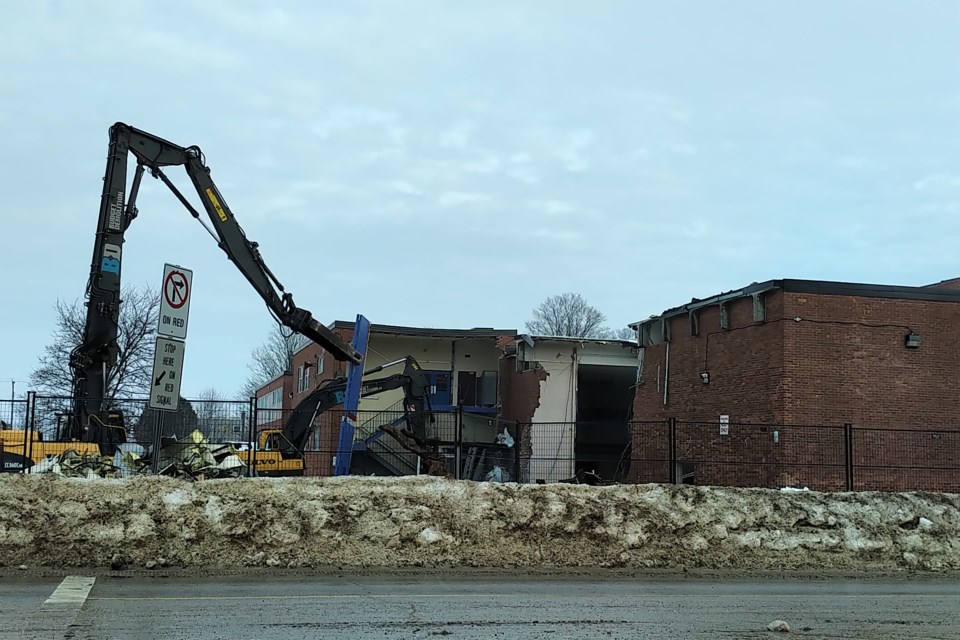 Today was a heart-breaking day of sorts for many former ODCVI students, as demolition of the old school began. John Hammill/OrilliaMatters

Orillia High School welcomed its first students in 1877. It would grow from its original 57 students to more than 1,000 in its heyday when it became known as Orillia District Collegiate and Vocational Institute (ODCVI).

Over the years, as the student body grew, several additions were constructed, creating a confusing maze of hallways and awkward spaces that were difficult for new students to navigate.

But to those who grew up in its hallowed halls, ODCVI was a home-away-from-home during those awkward teenage years. It housed clubs and dances and sports and became a place where friendships took root and blossomed - for generations of young Orillians.

However, several years ago, the decision was made to merge ODCVI with its long-time rival, Park Street Collegiate Institute. Orillia Secondary School was born.

Since then, ODCVI has sat dormant; its halls quiet, its gyms silent and forlorn.

Late last year, the County of Simcoe purchased the property for the development of a future regional services hub.

The community will be asked for input in the coming weeks and months as to what that hub might involve.

Sadly, the county said the aged buildings on the West Street North property needed to be demolished to make way for that hub.

“Investigation into the viability of utilizing or re-purposing the older infrastructure revealed that this option was not prudent or cost effective,” said a media release from the county.

And so, on Monday, the demolition began at the Home of the Blues.

For many ODCVI students and teachers, it was a bittersweet day.

City cracking down on out-of-town visitors to beaches, boat launches
Jul 2, 2020 1:30 PM
Comments
We welcome your feedback and encourage you to share your thoughts. We ask that you be respectful of others and their points of view, refrain from personal attacks and stay on topic. To learn about our commenting policies and how we moderate, please read our Community Guidelines.