'In spite of the fact that they’ve demonized education workers for being two months off in the summer, they’ve treated themselves to a five-month vacation'
Oct 28, 2019 7:15 PM By: Nathan Taylor 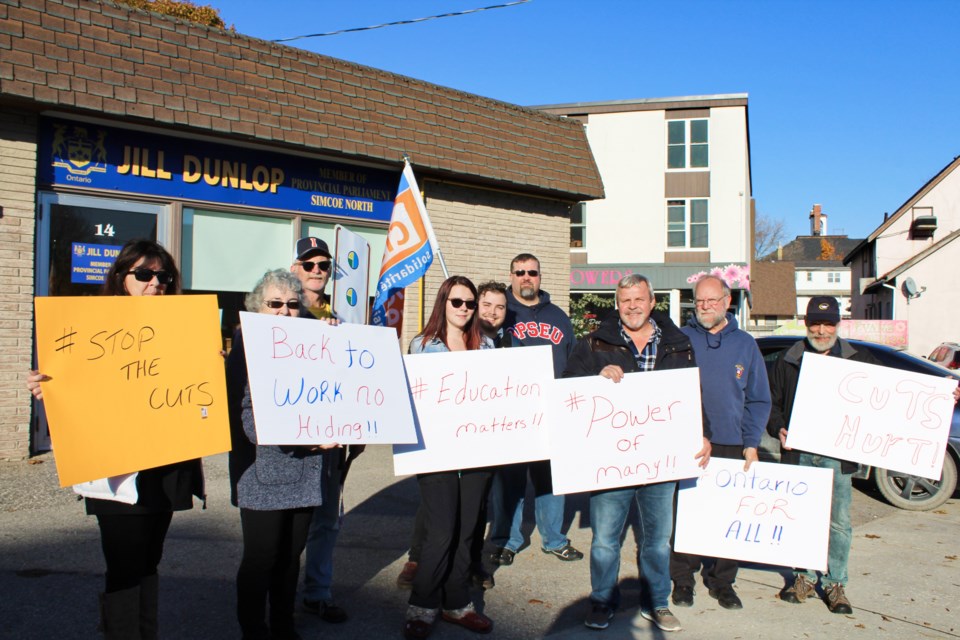 Union representatives welcomed MPPs back to work Monday with rallies at their offices, including one in Orillia.

A small group of demonstrators gathered outside of Simcoe North MPP Jill Dunlop’s office on Coldwater Road as part of a “welcome back” rally.

“It may be meant with a satirical bent, but it’s nice to see them get back to work after a paid vacation,” said Jason Barker, treasurer with the North Simcoe Muskoka District Labour Council. “In spite of the fact that they’ve demonized education workers for having two months off in the summer, they’ve treated themselves to a five-month vacation.”

The Ontario legislature resumed Monday after the longer-than-usual break. Barker noted while MPPs were paid for their five months away from Queen’s Park, many teachers and other workers are not paid, or are laid off, for their summer break.

Barker, a computer and network technician with the Simcoe County District School Board, said more than 1,800 board employees were laid off for the summer.

“We want to welcome them back to work and reassure them that just because they took five months off, we’re not going away,” he said. “The message is the same: Your cuts are not what Ontarians want.”

While the rally was organized by the labour council, Brandon Rhéal Amyot was there to represent the Lakehead University Student Union and show solidarity.

“We know that a lot of the cuts have been felt across the education sector. Building relationships with labour unions is important to us,” Amyot said.

A decision by the province to allow students to opt out of paying certain fees is being felt locally. Amyot, who is the student union’s campaigns commissioner, said 65 per cent of Lakehead students have opted out.

“That will make it tough for us in the long run,” they said. “We could see the death of student life across Ontario.”

The Canadian Federation of Students’ Ontario arm has launched a lawsuit against the province as a result of the changes that allow students to opt out.

Amyot’s message to Dunlop, who was not at her office Monday, was to do more than listen.

“You have to act,” Amyot said, adding, “The burden of post-secondary education should not be on the backs of students.”