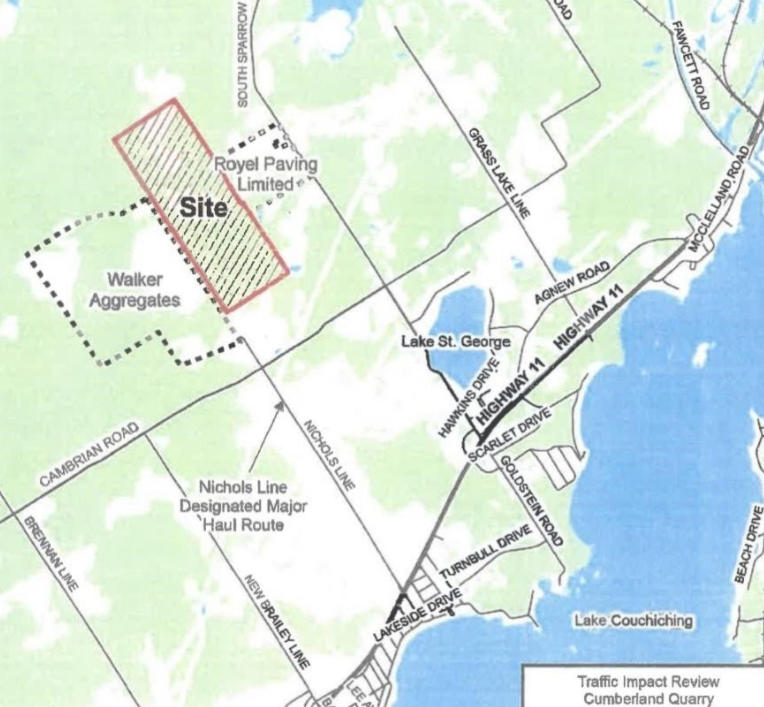 Map showing the proposed site of a quarry in Severn Township.

Opposition to a proposed quarry in Severn continues to grow.

The township recently received a letter jointly submitted by Ontario Nature, the Simcoe County Greenbelt Coalition and the Couchiching Conservancy. All three organizations are objecting to the Severn Aggregates quarry, which is proposed to be created adjacent to the Walker Aggregates quarry on Concession 11.

It isn’t common for the Couchiching Conservancy to publicly voice opposition to projects, but the proposed quarry — called the Cumberland quarry — is too close for comfort. It is adjacent to the McDarker Wetland, one of the conservancy’s properties.

Severn Aggregates has applied for a licence to excavate 500,000 tonnes a year from the proposed site, which is currently zoned greenland, the organizations noted in their letter. The Ministry of Natural Resources and Forestry has not yet made a decision on that application.

The township is requiring Planning Act applications for an Official Plan amendment, zoning bylaw amendment and site plan agreement before making a decision on a zoning change. The company has not yet done that.

Bisset said the conservancy works closely with quarries in the region, “so it’s not a case of trying to demonize quarry proposals.” However, if a proposal is deemed a threat to its property, “we’re bound to defend that.”

“In a perfect world, we would like to not see a quarry there at all, but there has been a quarry presence in that area for years,” he said.

Anne Bell, Ontario Nature’s director of conservation and education, said the organization decided to chime in on the proposal for two main reasons. One is the effect the quarry could have on the provincially significant McDarker Wetland.

“There are so many benefits that wetlands provide,” Bell said, adding climate-change mitigation is one of those benefits.

The second reason is the species-at-risk that call wetlands home.

“There are likely many species-at-risk on this property,” she said, referring to butternut trees, Massasauga rattlesnakes, eastern whip-poor-wills, eastern wood-pewees, wood thrushes and common nighthawks.

“I hope the township sticks to its guns and doesn’t allow the zoning change to go forward,” she said.

The area is part of a tract referred to as the Matchedash Wildlands, which runs from Georgian Bay to Orillia.

“It’s still in such a wild state and it has lots of unique species,” Bell said. “The Matchedash Wildlands corridor is a special place and we all have a responsibility to ensure it continues.”

The hope is that the province doesn’t make an arbitrary decision, she added.

“In southern Ontario, despite the policy protections we have in place, we’re continuing to lose wetlands,” she said. “Policy has to be enforced. If it’s not enforced, people get around it.”

She pointed to a case in Vaughan, where a minister’s zoning order was granted. That order, issued by Municipal Affairs and Housing Minister Steve Clark, allows development to go forward with no chance of appeal.

“It’s a provincially significant wetland, and now it’s gone,” Bell said. “It depends on enforcement and it depends on political will to ensure policy is respected.”

Minister’s zoning orders have been around for a while, but lately they have been “used left, right and centre to allow development to go forward,” she said.

Residents, too, recently expressed concern about the quarry proposal and its potential impact on the shallow Lake St. George. A petition collected almost 200 signatures.