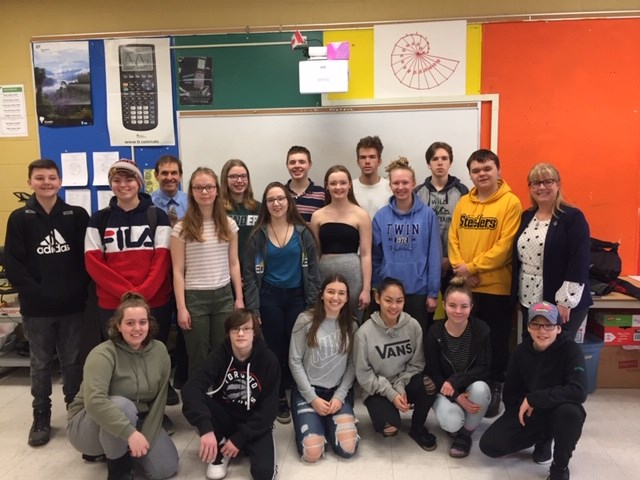 A group of 21 Twin Lakes students is preparing for an exchange trip to Nunavut. A Feb. 23 concert will help raise funds to support the trip. Submitted photo

In an effort to raise funds for this once-in-a-lifetime experience, we are presenting award-winning performing artist David Newland, in Orillia on Feb. 21 at St. Paul’s.

“Which way does your compass point?” asks David Newland, contemplating the Canadian condition. “We call ourselves ‘northern’ people, but what do we really know about the North?”

It’s a question the veteran singer-songwriter sets out to explore in his stage show, and forthcoming album, Northbound.

With photos, stories, and songs inspired by his travels in the Northwest Passage, Northbound explores the mythic North and the real Canadian Arctic.

The original music, performed by Newland’s folk-root ensemble Uncharted Waters, is catchy, thought-provoking, and at times deeply moving. Set against awe-inspiring Arctic images, the effect on audiences is profound.

“We’ve struck a chord with this show,” says Newland. “People want to hear Canadian stories — and they especially want to hear the ones we’ve been missing.”

Enter Siqiniup Qilauta (Sunsdrum), who brings a contemporary Inuit perspective to the show. Based in Ottawa, they mix throat-singing, drum-dancing, and story-telling with insight into Inuit life.

“About a third of Canada is Inuit territory,” says Lynda Brown, founder of Siqiniup Qilauta. “So the more we can inform Canadians about who we are as Inuit, the better.”

A frequent performer and mainstage host at Mariposa Folk Festival, Newland has twice brought his Arctic-inspired shows to Orillia. But this visit will be special, in part because of the addition of Siqiniup Qilauta.

“Creating space for Inuit voices is truly the heart of the show,” says Newland.

Brown promises audience interaction beyond clapping and singing along: “Just wait til you’ve heard an entire audience learn to throat-sing together,” she says. “We’ll get you there!”

Proceeds from the performance will support students from Twin Lakes Secondary School who will participate in an exchange with Clyde River, Nunavut.

Newland will also accompany Siqiniup Qilauta on a short performance at Twin Lakes, the morning after the show.

“We are thrilled to be able to offer this kind of experience to our students,” says principal Julie Underhill. “It’s a wonderful example of creative personal engagement supporting real-world action.”

“It’s what we need right now: to connect with one another in real ways,” says Newland. Adds Brown, “It’s why we do the work we do. And the best part is, we get to have fun doing it!”