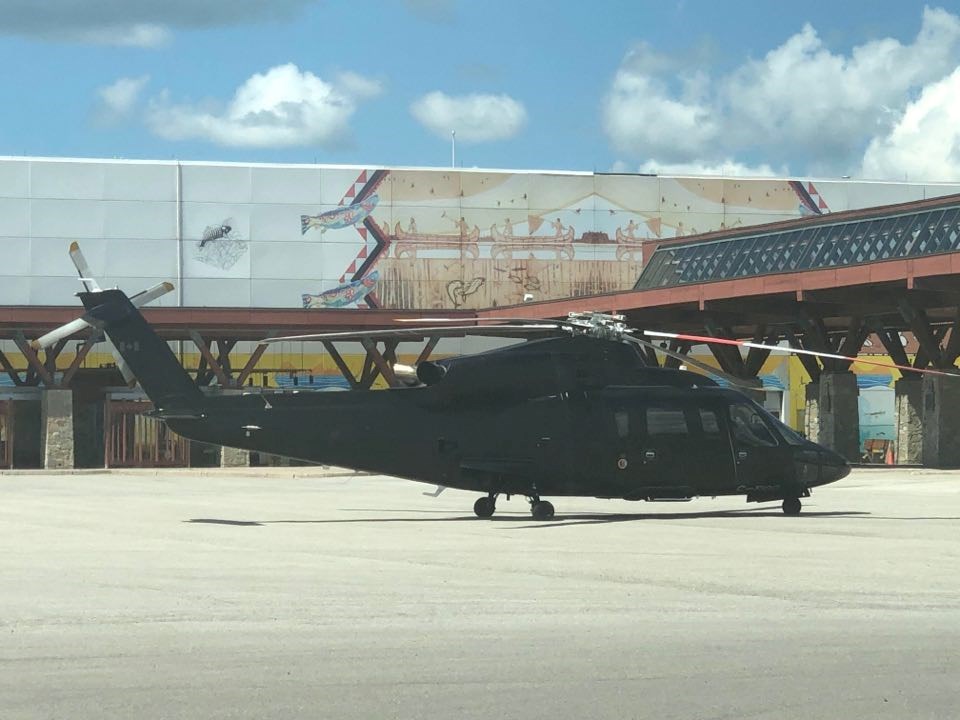 A helicopter landed in the vacant parking lot of Casino Rama today. The casino has been shut down since mid-March. A spokesperson for the casino's operator said it was an investor. Contributed photo

Since mid-March, when the Ontario Lottery and Gaming Commission shut down gambling facilities throughout the province due to the global pandemic, Casino Rama has been closed.

But there was a lot of unexpected action at the gambling shrine east of Orillia earlier today.

Rama First Nation residents were shocked to see a black helicopter land in the vast, vacant parking lot of the casino. The helicopter remained on the ground for about an hour, before taking off.

According to Robert Mitchell, director of communications and public affairs for Gateway Casinos & Entertainment Limited - the operator of Casino Rama - the visit by the helicopter might have been unexpected by local residents, but Rama First Nation approved the excursion.

"There was a planned visit from one of our investors this morning, which was approved by Rama First Nation, to review our re-opening plans and the future potential for Casino Rama Resort," Mitchell said in an emailed response.

The visit certainly stirred up speculation.

"When community members, specifically Rama Union members started calling me, upset, not knowing what was going on, and bothered by the unnecessary noise, I became concerned, wondering why one would land there when there’s an airport down the road," said Tshweu Moleme, a Unifor rep at Casino Rama.

"I spent many weeks earlier this year, out west, where an employer used helicopters to fly scabs (replacement workers) in, while our brothers and sisters were locked out of their work, for months," he told OrilliaMatters.

"So when I hear of helicopters flying into our workplaces, I get worried, triggered," he said.

"I’m hoping it wasn’t anything of the sort and perhaps maybe just some high-profile company person dropping off some much needed money, PPE materials, etc., which will help reopen and bring our members back to work, soon."

Earlier this month, Leisure Acquisition Corp. backed out of a massive $1.15 billion deal to merge with Gateway. That agreement, spoken of in glowing terms by Gateway a few months earlier, would have taken the Canadian gaming firm public.

Leisue Acquistion remains one of the largest investors in Gateway, according to financial reports.

There will be no high school sport championships this fall
Aug 14, 2020 5:15 PM
Comments
We welcome your feedback and encourage you to share your thoughts. We ask that you be respectful of others and their points of view, refrain from personal attacks and stay on topic. To learn about our commenting policies and how we moderate, please read our Community Guidelines.