It's been a beautiful run 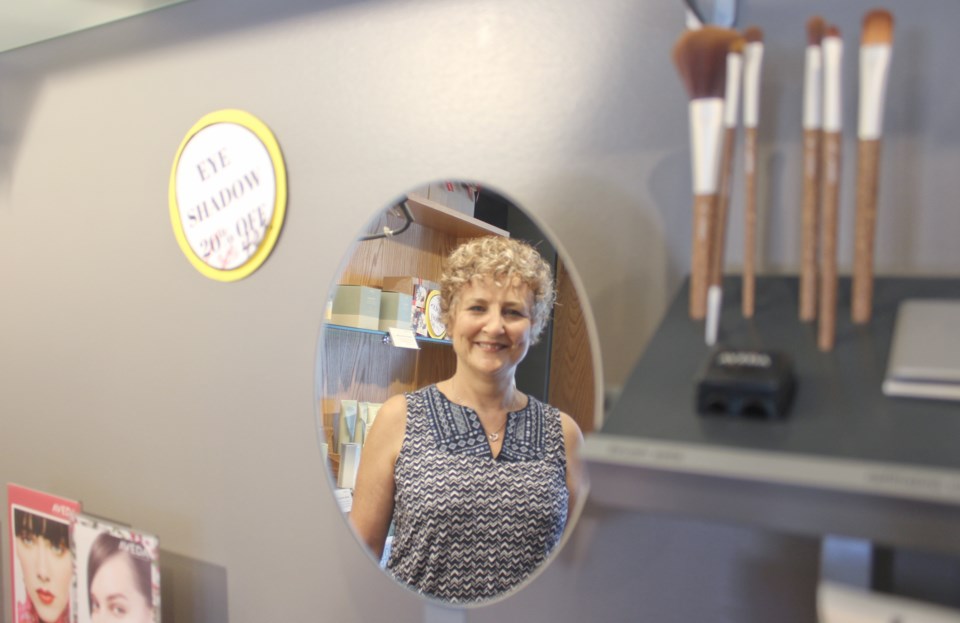 Anne Angliss reflects on the nearly 25 years she has owned Peaches and Cream Salon and Spa in Orillia. Angliss is retiring, and Friday will be the last day of business at Peaches and Cream. Nathan Taylor/OrilliaMatters

After nearly 25 years in business, Anne Angliss is ready for her beauty rest.

The owner of Peaches and Cream Salon and Spa is retiring. Friday will be the last day of business for the West Street North spa.

Angliss took over the business is 1994. It had been in operation for six years before she purchased it. She was working in esthetics in Midland when she visited the spa to check out some of the equipment it had for sale  The owner suggested Angliss buy the business.

Angliss’s daughter, who was with her at the time, said, “Mom, look at this place.”

“I fell into it,” Angliss said. “It was here waiting for me.”

When Angliss took it over, it was only a spa — not a salon — and was confined to the ground level of the building. In 2001, she expanded the business to a second floor.

Soon after Angliss purchased Peaches and Cream, she decided she wanted to carry Aveda products. She called Aveda, expressed her interest and was told a representative would visit her and conduct an interview — not as simple a process as Angliss expected. She was required to attend education sessions about the products. Eventually, she secured the Aveda line.

“That was a great calling card,” Angliss said.

Aveda is particular about which stores carry its products, Angliss said, and Peaches and Cream is the only place in Orillia that does.

With retirement just around the corner, “I’m sure there’s someone waiting for their call from Aveda,” Angliss said.

While being the city’s sole carrier of a popular brand has been a draw for clients, it hasn’t always been a smooth ride for Angliss.

“The nature of the business has changed from being an environment to the quick, in-and-out services,” she said. “Our clientele is faithful, but there are always new and shiny things out there. So, some left and some came back.”

Hotels, resorts and casinos have entered the salon and spa scene over the years, which has added to the competition.

“They offer services, but their bottom line isn’t dependent on the spa,” Angliss said.

She understands some people are too busy to take the time to soak in the entire spa experience, opting instead for a 30-minute manicure somewhere else, but it isn’t the same. One of the most rewarding parts her job has been providing the full experience.

“I love working with women, making women feel better. When they look better, they feel better,” Angliss said. “They’re in a zone. I’ve done my job. I’ve taken them to their zen zone.”

She likes to be able to help her clients spoil themselves, especially since many come in when they’ve experienced “one of the four Ds,” as Angliss described it — “divorce, debt, death or disease.”

And, while women are often fiercely loyal when they find hair stylists they like, Angliss has found a clientele that is willing to try something new.

“Sometimes we wean cottagers off their Toronto hair stylists, but they still have (their stylists when they're home),” she said.

Angliss is turning 60 this year, and she simply felt it was time to move on, but maybe she didn’t expect it to happen so quickly.

“I put the business and the building on the market just to see, and the first people to look at it bought it,” she said, noting it will be home to another business, but not a salon and spa. “So, just like I fell into it, I fell out of it.”

Angliss thanked her clients, some of whom have been seeking out her services since she bought the business, for their support over the years.

“Huge gratitude. Thank you,” she said. “I couldn’t have done it without them.”

While Friday is the last day for hair and spa treatment, there will be a closing sale Saturday from 9 a.m. to 2 p.m. Peaches and Cream is at 474 West St. N.