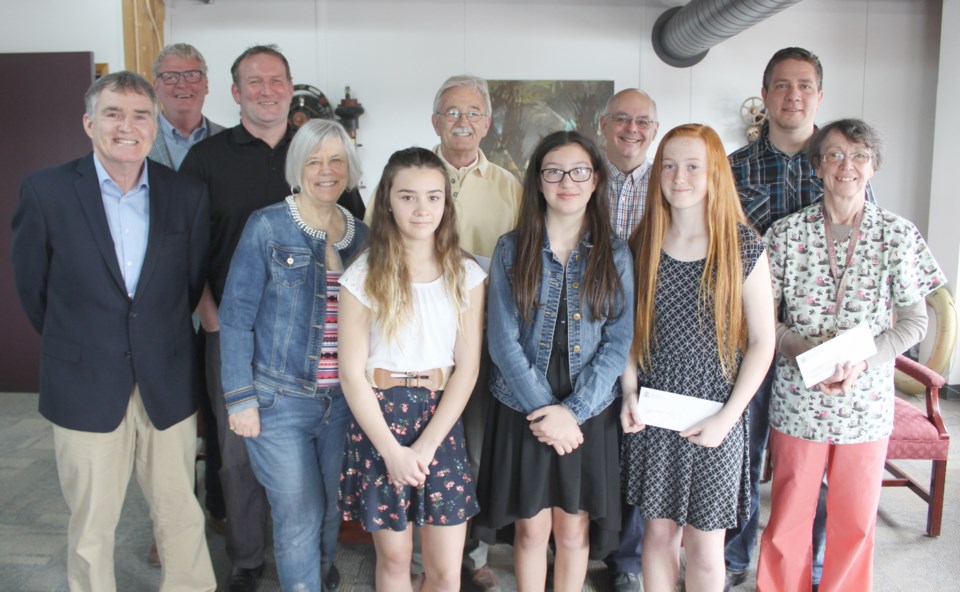 The city is showing its support for a variety of local groups, from wrestlers to musicians, with its latest round of grants.

The mayor handed out a total of $5,841 on behalf of the City of Orillia’s grants committee Wednesday morning.

The Orillia Vocal Ensemble received $1,500. Naturally, the choir will pay it forward. Thanks to sponsorship from Dapper Depot, the group is able to put on concerts and donate all of the proceeds to charity. The city grant will help the ensemble with other costs, such as those related to rentals and other behind-the-scenes expenses.

“We’re very, very pleased,” choir and board member Brian Adams said of the funding. “It’s an acknowledgement of the effort of the choir and its connection to the community.”

Musical director Roy Menagh chooses a combination of traditional and contemporary pieces for the concerts and tries to cater the selection to the cause the group is supporting. For example, the ensemble’s next performance — May 26 at 7:30 p.m. at St. Paul’s Centre — is called Richer than Wealth, and proceeds will go toward the loonie lunch program at St. James’ Anglican Church.

Three young wrestlers were on hand Wednesday to pick up a cheque for $1,241 on behalf of the Simcoe County Elementary Athletic Council. It will allow them to continue holding a wrestling tournament at Rotary Place.

“We’re really thankful that we get to use the big arena for our wrestling tournaments,” said Cassandre Smith.

Orillia’s no-kill Comfie Cat Shelter also received a boost with a $750 grant. Board president Jason Browning said it will help the shelter, which is entirely run by volunteers, hire someone to help with public relations and social media.

“Our hope is that they will be able to make contacts and reach out for other forms of donations,” he said. “Any source of funding is highly appreciated and put to good use.”

The $1,350 granted to Big Brothers Big Sisters of Orillia and District will help the agency with one of its greatest challenges.

The organization has received city grants for most of the 10 years Maxwell has been at the helm.

“It’s always appreciated that the city’s behind us on a consistent basis,” he said.

Rounding out the list of recipients is the Orillia Silver Band, which received $1,000.

“We are very fortunate to have such great organizations in our city and are pleased to present these grants to help support the important contributions they make within our community,” said Mayor Steve Clarke.