'We are taking all the precautions and doing everything that is necessary,' says Lighthouse official; Orillia man not happy with the way incident is being handled
Apr 29, 2021 5:45 PM By: Tyler Evans 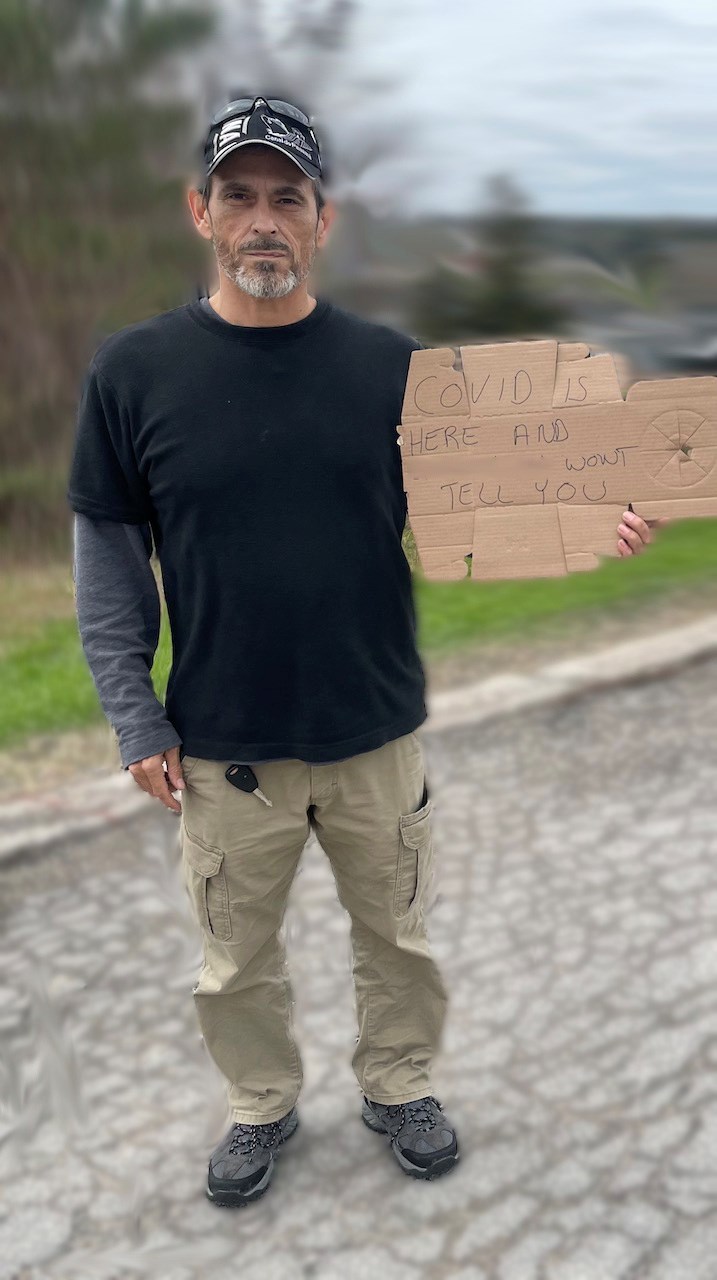 Michel Allen was seen outside an Orillia hotel on Thursday afternoon informing community members of a positive case of COVID-19.Tyler Evans/OrilliaMatters

On Thursday morning, officials at the Lighthouse Soup Kitchen and Shelter were notified of their first positive case of COVID-19 at their temporary shelter at an Orillia hotel.

“We have one confirmed case in our shelter who is in isolation. We are working with the health unit and Orillia Soldiers' Memorial Hospital (OSMH) to check all other participants, staff, and volunteers,” said Linda Goodall, the executive director of the Lighthouse.

“We are taking all the precautions and doing everything that is necessary.”

The Lighthouse, in conjunction with the Simcoe Muskoka District Health Unit, hosted a vaccination clinic on April 13 in which 55 people - including people living at the Lighthouse, staff, and shelter volunteers - received a vaccine. Goodall could not say if the participant who tested positive had been previously vaccinated.

As part of monitoring and the stay-at-home order, the Lighthouse puts restrictions on participants on when they can or can’t leave because they are trying to limit any possible risk to the community, Goodall explained.

Orillia resident Michel Allen says his sons, Kraig Allen and Karl Machendagos, are staying in the hotel via the Lighthouse and are currently unable to leave.

“My sons are staying there, and we were supposed to do some work this weekend, but he says he’s not allowed to leave the building because there is COVID in there,” Allen said.

Allen went to the hotel on Thursday afternoon to find answers but he says he wasn’t given much information.

“The only explanation I was given from the hotel was COVID, but they are still letting other people in and out of the building, and I don’t know why there isn’t some kind of information at the front of the driveway explaining to people what’s going on,” he said.

Allen took it upon himself to make a sign and stand outside the hotel property on Thursday afternoon to inform citizens of the positive case that had been linked to the hotel.

According to Allen, a staff member approached him to ask why he was picketing on the periphery of the hotel’s property.

“I called the police, and they did come, and they said that I’m allowed to stand out here and let people know as long as I’m not creating any issue with traffic.”

Allen says he contacted the health unit who told him they would pass along the information to the necessary officials.

“I said that’s not the proper response when the government is screaming about it the way they are on the news. They are getting the army to come in, and these guys don’t have a sign up here to let people know. The proper response should be, 'OK, we will have someone down there within a short time,'” he said.

Despite Allen’s frustrations, Goodall assures the community that nobody at the Lighthouse is being held captive, but officials need to make sure there is no risk of spread within the community.

Goodall can’t confirm which Orillia hotel the Lighthouse is currently using for security reasons. When the pandemic began, the Lighthouse was no longer able to safely use its cramped, antiquated building on Peter Street. The County of Simcoe stepped in, with funding from the federal government, to cover the costs of hotel rooms for those experiencing homelessness.

“When we are in our own venue, we will have different security,” she said, referencing the new facility under construction on Queen Street.

Goodall also says there is no immediate threat to the Orillia community and stressed the situation is under control.

“The hotel is safe, the Lighthouse is safe, and we are keeping everybody in the community safe as well,” she said.

The Simcoe Muskoka District Health Unit was unable to comment in time for publication of this article.