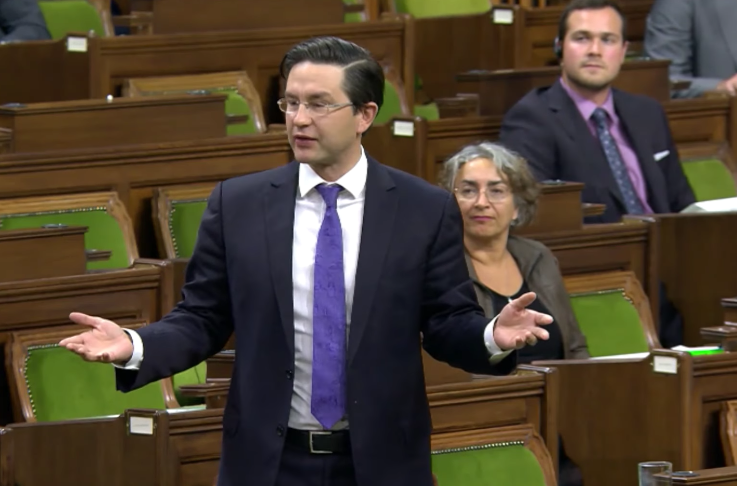 MP Pierre Poilievre took the Liberal government to task in the House of Commons Wednesday for providing $200 million in taxpayers money to Gateway Casinos and Entertainment, which operates Casino Rama and many other properties.

EDITOR'S NOTE: Subsequent to the publication of this article, lawyers for Gateway Casinos and Entertainment told OrilliaMatters that MP Pierre Poilievre’s statement included a number of inaccuracies such as “the company was just downgraded to junk status and its parent company lost 95 per cent of its value on the stock market before being delisted altogether,” which is false.  Lawyers for Gateway advised further that Gateway is a private company and has not been listed on a public exchange and has not lost 95% of its value on any stock market

A long-time Conservative MP says Gateway Casinos and Entertainment, which operates Casino Rama and many other gambling facilities, “swindled a naive prime minister out of $200 million” of taxpayers’ money.

During an animated exchange with Prime Minister Justin Trudeau Wednesday in the House of Commons, Carleton MP Pierre Poilievre says Gateway is a “failing casino firm” and he chided Trudeau for “throwing away our money in this jackpot for casino insiders.”

Gambling on a casino bailout. pic.twitter.com/eG4ZNhIzNU

Poilievre is referring to the news that Gateway was provided a loan from the Canada Enterprise Emergency Funding Corp. under its Large Employer Emergency Financing Facility (LEEFF).

The agreement, announced in late September, provides Gateway with access to $200 million of liquidity.

“These funds will provide us with capital to support restarting our operations and returning people back to work when it is safe and viable to do so,” Gateway CEO Tony Santo said in an email to employees.

But Poilievre said the company is not deserving of the funding.

“The company was just downgraded to junk status and its parent company lost 95 per cent of its value on the stock market before being delisted altogether,” Poilievre said Wednesday.

“In fact, financial experts in Toronto say the company vastly overvalues its assets. But there is someone who would invest other people’s money in it - the casino just got the jackpot of $200 million from this government,” said the former cabinet minister in Stephen Harper’s government.

“Would the financial genius over there who invested $200 million of our tax dollars in this failing casino firm please stand up.”

Trudeau stood up and provided the following response.

“While the Conservatives play silly political games, we recognize the extraordinary situation Canadians are facing,” said Trudeau, who noted Canadians are “worried” about “how they’re going to make it through this pandemic."

“Mr. Poilievre’s comments contained a number of factual errors which have since been corrected with his office,” Mitchell told OrilliaMatters.

He also said the casino company’s LEEF application “had the support from MPs across the political spectrum … including Simcoe North MP Bruce Stanton and 10 other Conservative MPs who wrote letters of support on behalf of Gateway and our 8,000 employees across Canada.”

He also stressed the LEEFF funding will be repaid by Gateway.

“The LEEFF program is a loan that will be repaid,” said Mitchell. “We will use the funds to help re-open our businesses and get people back to work as soon as it is safe and viable to do so.”

He noted Gateway is “excited to welcome back many employees this week as we re-open a number of facilities today and Saturday, including our Innisfil site.”

Meanwhile, Casino Rama will remain closed. Its doors have been locked since OLG ordered all casinos to close on March 16.

Officials say Casino Rama is too large to open in light of provincial restrictions that limit the number of patrons to 50 and prohibit table games.

Tshweu Moleme of Orillia, a Unifor rep at Casino Rama, said he “can understand some of the concerns raised by the Opposition, especially given the size of the ($200-million) LEEFF loan.”

Poilievre “is doing what he’s in Parliament for - to hold both the government and the borrower accountable,” said Moleme

“He can help the government in making sure that the money (is) used as intended - to help revive a business and to keep jobs,” he said.

“The government has done its part, ensuring that Gateway employees can still have jobs to return to. It's now Gateway's turn to keep their word … This is about saving jobs and helping Canadian families,” he said.

Now is not “the time for partisan jabs. Canadians would like to see MPs work together, making sure that we get through this pandemic and come back strong. The entire parliament should be on the side of workers.”

He urges Gateway to use this “much needed financial oxygen” to reopen Casino Rama.

“With such a significant loan, a world-class facility like Casino Rama should be coming back strong,” Moleme said. “I believe that's what parliamentarians, workers, and communities would also like to see happen.”

Casino Rama operator secures $200M loan; reopening uncertain
Sep 28, 2020 11:15 AM
Comments
We welcome your feedback and encourage you to share your thoughts. We ask that you be respectful of others and their points of view, refrain from personal attacks and stay on topic. To learn about our commenting policies and how we moderate, please read our Community Guidelines.