New fishing pier to be built at Port of Orillia 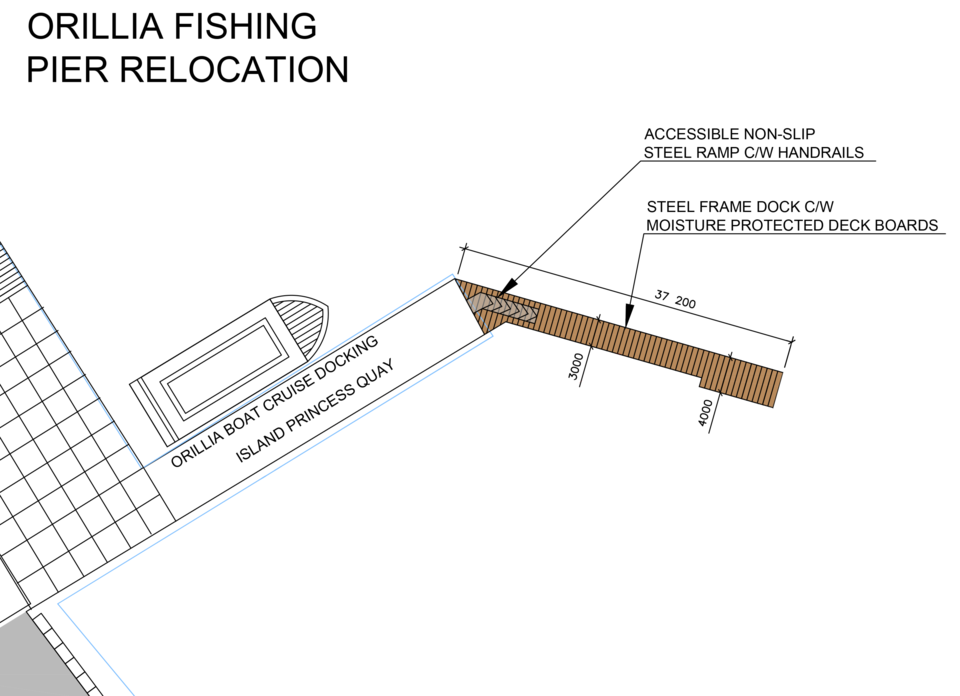 This diagram shows the new location for a fishing pier to be constructed at the end of the dock where the Island Princess is moored. (City of Orillia diagram)

The city is poised to build a new fishing pier at the waterfront.

Since about 1980, anglers have been using the fishing pier located at Centennial Park, near the Orillia Waterfront Centre. However, that pier “has reached the end of its lifespan,” says John McMullen, the city’s manager of parks.

With that in mind, city staff fished around for a new location and, ultimately, decided it would be best to construct a new pier at the end of the Centennial Park dock used by the Island Princess.

“The location of the new fishing pier will be visible from the downtown and located far enough from the marina to not interfere with other boat traffic,” McMullen told city councillors at their council committee meeting Monday night.

McMullen said the proposed new location was discussed with members of the Orillia Fish and Game Club, the operator of the Island Princess, the manager of the Port of Orillia and others. “They were all supportive of the idea,” said McMullen.

Coun. Pat Hehn said she was in favour of the new location.

“I have many fond memories of my father taking our children down to the old fishing pier … and I love the new location angling out from the Island Princess (dock),” said Hehn.

However, the Ward 4 councillor wondered if the fishing would be as good due to the frequent churning of the water from the often departing and returning Island Princess.

“We did consult with the Orillia Fish and Game Club and we did some informal consultation with anglers (we) met (during the process) and the end of that dock is already a popular fishing location,” said McMullen. “Our research (indicates) the fishing is probably, at the least, equivalent, but it’s a preferred location with less congestive boat traffic there.”

Originally, staff had also been tasked to plot out a location for a new canoe/kayak launch. However, that part of the plan has been put on hold.

“There is an intention to build a canoe/kayak launch, but at this time, because another capital request is coming forward for the update of the design plan of Couchiching, Centennial and Veterans Park, that project has been put on hold until the design is done,” said McMullen.

The desire for a canoe/kayak launch was identified through the development of the port realm plan, said Coun. Ted Emond.

“The intention (was) this is for the public to bring their kayaks, boards, canoes to allow them to have access to a sheltered water launch in a fashion that is easy to get in as opposed to a commercially- operated enterprise,” said Coun. Ted Emond.

Currently, a commercial operator runs a seasonal kayak rental business near the government dock. That enterprise is awarded through a season request-for-proposals project.

The current operator has been consulted throughout the process, said McMullen. It is expected a commercial enterprise would continue to be operated at the waterfront.

Council Committee approved the new location of the fishing pier – a project that was first endorsed through last year’s capital budget process – Monday night. The decision must be ratified at next Monday’s regular meeting of council.