On this day 38 years ago, Terry Fox inspired a city during his stop in Orillia 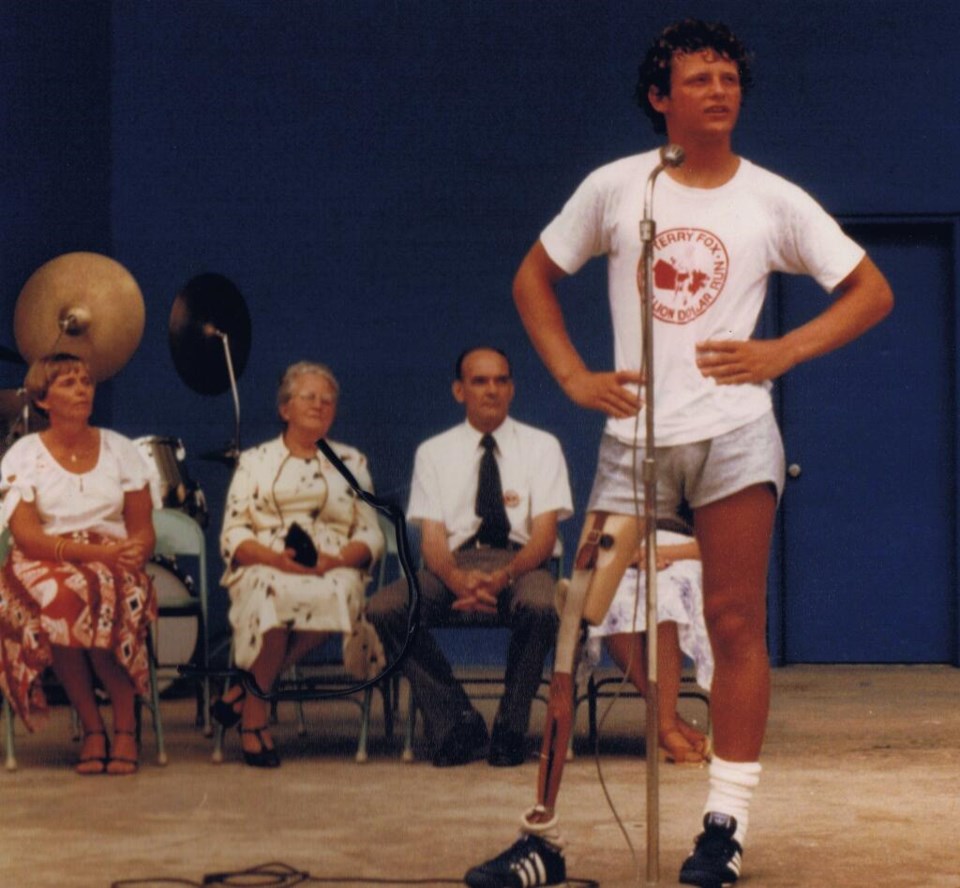 Terry Fox stopped in Orillia during his Marathon of Hope on July 27, 1980 and spoke at a civic reception at the Orillia Aqua Theatre. Runs in his honour continue to be held around the world. Contributed photo

Many area residents still fondly remember July 27th, 1980: the day hundreds of people gathered to hear Fox speak as part of the original Marathon of Hope for cancer research. Terry would celebrate his 22nd birthday the next day in Gravenhurst.

Organizers are preparing to spread the word about the annual Orillia Terry Fox Run, by distributing official 2018 pledge forms, posters, and lawn signs to willing hosts in the coming weeks, while encouraging participants to sign-up online as individuals or teams and connect their donors to a secure website to solicit donations.

The all-volunteer organizing committee is in the process of contacting run day volunteers as well as members of Terry’s Team – cancer survivors who demonstrate the success of cancer research funded by monies raised in the Orillia area.

“It was so great to see so many commemorative red shirts last year and to hear one survivor’s experience in her own words,” says run organizer Alison Stoneman, a 22-year survivor thanks to then-experimental treatment. “Gini Stringer is such a positive influence in the community and an inspiration to all who live a full life with a cancer diagnosis.”

Advance online registration to collect pledges or to donate to a participant is now available for individuals and teams at www.terryfox.ca/terryfoxrun/orillia . Donors receive immediate tax receipts by email. The Terry Fox Foundation reminds everyone that it neither recommends nor endorses soliciting donations door-to-door to ensure donations are directed to the Foundation as intended.

The 2018 Orillia Terry Fox Run will be held Sunday, Sept. 16 on Terry Fox Circle at Couchiching Beach Park. Registration begins at 11:30 a.m. with a unified Run start beginning at 1 p.m. Follow Terry Fox Run - Orillia on Facebook for upcoming events and details for Terry Fox Week in the City of Orillia.

Climate change, rising costs and provincial cuts prove challenging
Jan 19, 2020 8:00 AM
Comments
We welcome your feedback and encourage you to share your thoughts on this story. We ask that you be respectful of others and their points of view, refrain from personal attacks and stay on topic. To learn about our commenting policies and how we moderate, please read our Community Guidelines.