Township plans to deal with development issues through Official Plan process; Orillia councillor still 'not satisfied ... that the MZO is not in play'
Feb 8, 2021 8:00 PM By: Nathan Taylor 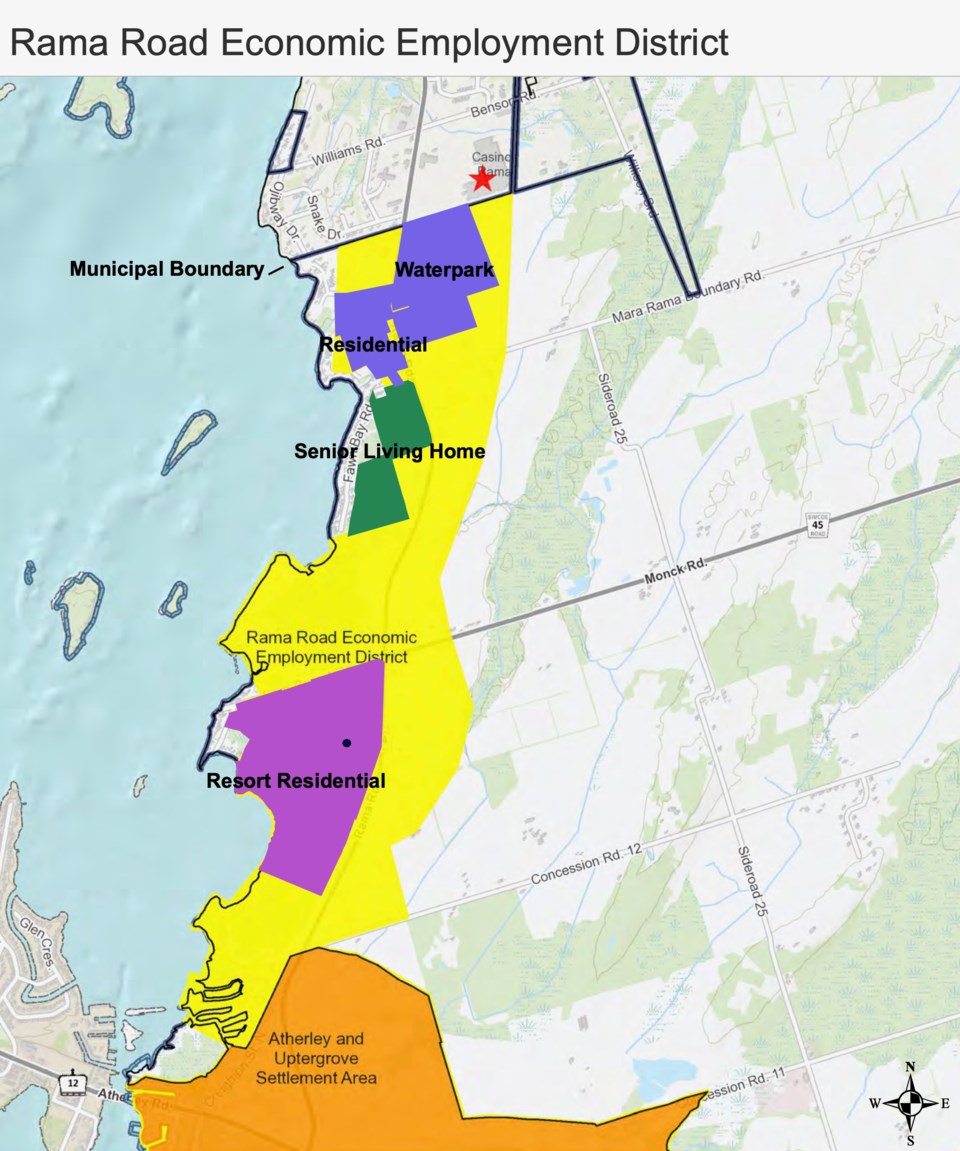 An image showing some of the plans for the Rama Road corridor project.

However, Orillia councillors still expressed a number of concerns during a virtual special council meeting Monday, which was attended by Ramara Mayor Basil Clarke and some senior township staff.

“The first misconception I want to clear up ... is we have not asked for an MZO at this time,” Clarke said.

“We’d like more control over how development is staged. That's the main issue we’re looking at.”

Pinsent said he heard from staff in the fall who told him there might be some interest in development along Rama Road but noted there is a policy in place that prohibits it.

Pinsent spoke with staff at the Ministry of Municipal Affairs and Housing (MMAH), and it was the ministry that brought up the possibility of an MZO, he said.

Part of the confusion stems from a letter Clarke sent to Orillia council in January. The subject line included a “request to MMAH for Minister’s Zoning Orders.” Later in the letter, however, Clarke noted, the letter the township sent to the minister’s office was “the first step in what both staff and council expect to be the beginning of a longer consultation process.”

“The letter served only as the initial engagement to provoke discussion.”

During Monday’s meeting, Clarke said, “We should’ve been a little more careful with the wording of our letter.”

He said the township’s goal is to deal with the process through its Official Plan, which would include an opportunity for input from the public and neighbouring municipalities.

Orillia Coun. Pat Hehn was concerned about the potential for an MZO to be issued anyway, saying once it’s mentioned to the ministry, “it gets in their pipeline.”

Pinsent noted township staff have not yet had a follow-up discussion with the ministry.

Hehn also pointed out the existing plans could boost the township’s population by up to 4,000 permanent residents. That would mean more demand for local doctors and more pressures on Orillia Soldiers’ Memorial Hospital. She asked if Ramara would then contribute to the Orillia Area Physician Recruitment and Retention Committee, as it currently does not.

“I know that does frustrate the committee somewhat,” Clarke said, but he added there have been no site-plan approvals for the development yet.

When that process is underway, the township could reconsider contributing to the committee, he said.

Clarke’s appearance at Monday’s meeting was the result of a motion Coun. Jay Fallis put forward in January. That motion was postponed until Monday to allow Ramara officials to attend the meeting and comment.

The motion stated, in part, that council “formally requests that any future Minister's Zoning Order application for the Rama Road Project located in the Township of Ramara ... be rejected.”

“I think Orillians have a right to be concerned about what is being planned here and what are the regulations around that,” Fallis said.

Both the township and the city have fielded a number of concerns from residents and environmental organizations, including the Simcoe County Greenbelt Coalition, particularly regarding the development’s potential effect on Lake Couchiching and the drinking water that comes from it.

Some have simply stated they’re against MZOs regardless of their potential applications.

“I understand the concerns, but they’re perceived concerns from our point of view and, to be completely honest, I don’t think they're real concerns,” Pinsent said.

He said the township will be sending a news release to clarify its position and, hopefully, allay some of those concerns.

Fallis’s motion from January was back up for discussion during council’s regular meeting later Monday afternoon.

Coun. Mason Ainsworth called the motion “redundant,” given the information provided by Ramara officials at the earlier meeting.

Coun. Ted Emond, on the other hand, still had reservations. Despite the comments from Ramara, “I was not satisfied in our earlier discussion that the MZO is not in play,” he said.

“The challenge we have is that ... the minister’s order can, in fact, override all of the legislation, all of the mechanisms that are in place within municipal jurisdiction,” he said. “The reassurance that this project will have tight planning control … is not necessarily accurate if, in fact, the minister exercises an MZO on this particular development.

“The MZO is a very dangerous vehicle in terms of the potential for it to override municipal decision making with respect to something of this magnitude.”

Coun. Tim Lauer asked that a vote on Fallis’s motion be deferred again. He reminded council that Ramara would be issuing a news release to clarify the matter and he wanted council to hold off on the motion until it had that information.

“I’m reluctant to interfere with Ramara’s good intentions,” he said, despite his “philosophical” objection to the use of MZOs.

Fallis, saying time is of the essence, did not support the motion to defer.

“The process of the MZO is very opaque and so we don’t know when an approval would happen,” he said, adding, if the motion were to be deferred, the MZO “might get approved and then the letter is meaningless.”

Council did vote to defer until March 29, giving staff and council members time to provide input and tweak the wording of the motion.