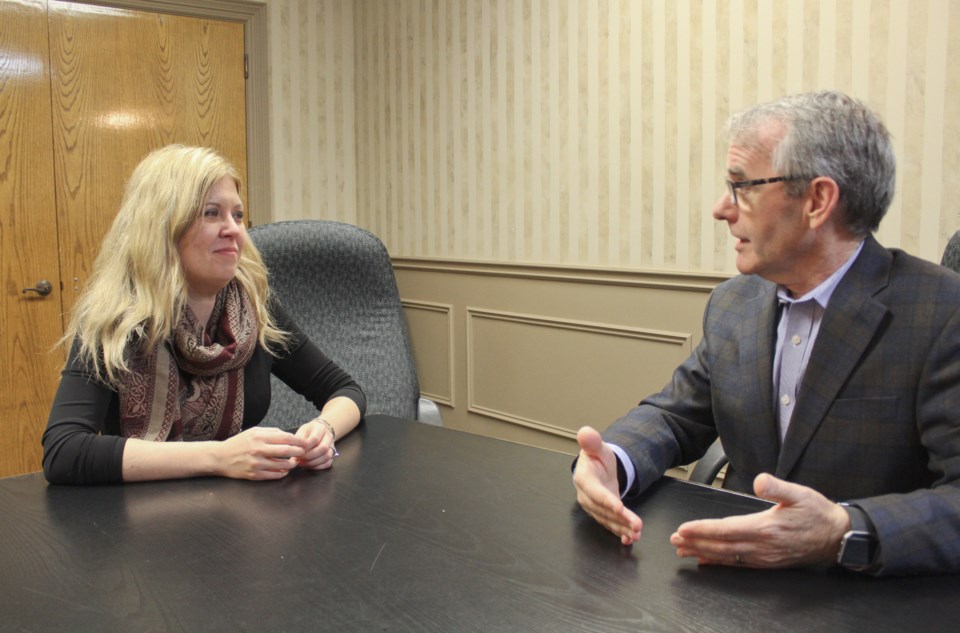 Rempel, the Conservatives' shadow minister for citizenship and immigration, held a consultation at the Best Western Plus Mariposa Inn and Conference Centre, where, with Simcoe North MP Bruce Stanton, she met with those who have had first-hand experience with immigrants, refugees and the system. Among them were local employers who have used temporary foreign workers, representatives from resettlement services, sponsors of Syrian refugees, as well as new Canadians who came in as refugees.

The media was not allowed to attend that consultation, but OrilliaMatters spoke with Rempel at Hawk Ridge Golf and Country Club, where Conservative supporters met for a breakfast meeting.

“Immigration is one of the hottest public policy issues right now,” said Rempel.

She cited an Angus Reid survey from August that showed 49 per cent of respondents felt there should fewer immigrants allowed in Canada. That figure was 36 per cent in 2014.

“That’s a big change in public perception. That really concerned me,” Rempel said, adding her party would like to see that figure trend back toward 2014 levels. “Our party’s position has always been one that immigration is a benefit to Canada and that we are a nation of immigrants. The interesting thing was the Angus Reid Institute … associated this drop with what’s happening at Roxham Road.” (Angus Reid also noted "it appears the desire to allow fewer newcomers to Canada extends further — to official, vetted, government-sponsored immigrants.")

Roxham Road is the spot in Quebec where migrants have been crossing illegally into Canada.

“Canadians know that the immigration system is not working right now, and that's when people lose faith or want less immigration,” Rempel said. “People want our system to be brought back to order and fairness.”

One way to improve the system, she said, is to revisit the balance of economic and humanitarian immigration. Under former prime minister Stephen Harper, about 60 per cent was economic, she said, meaning those who are believed to be bringing certain skills and an ability to contribute to the economy.

“That ratio has really switched in the last couple of years. Instead of just talking about those numbers, we need a better system for setting those numbers,” Rempel said.

She was critical of the way the current government brought in Syrian refugees, saying there was little consideration given to providing them with skills training and language services.

“A lot of that community is on welfare. They haven’t acquired Canada’s official language. That’s not a successful experience for them or for anyone else in the country,” she said.

“What I’m hearing loud and clear from, especially, rural communities is that we’re not matching people coming into the country to provide labour with where the actual needs are.”

Canada should certainly provide refuge on humanitarian grounds, she said, but added the world’s “most vulnerable” should be given priority, including lesbian, gay, bisexual and transgender citizens of Tanzania, who face imprisonment or worse because of their sexuality.

One of the issues on Rempel’s radar is the temporary foreign worker program. It does not “provide a pathway to citizenship,” she said.

“We’re proposing a major overhaul of that so that low-skilled workers have a way to come to Canada” while at same time contributing to Canada’s economy and “not taking jobs away from Canadians,” she said.

Party politics should not infiltrate the debate on immigration, Rempel said, but she feels that’s what has happened.

“As shadow minister, I've seen the debate on immigration become very polarized in Canada,” she said. “It’s been one of my biggest frustrations. That’s exactly why we’re doing this fact-finding mission. The government has ramped up the rhetoric so much. I want to bring this back to policy.”

Rempel, who is MP for Calgary Nose Hill, expects to wrap up her tour in a couple of weeks and launch the party’s immigration platform in January. She said she would like to see the Liberals adopt some of the policies. If they don’t, she’s ready to campaign on them when Canadians go to the polls in the fall.

Asked if he has heard much concern about immigration from Simcoe North constituents, Stanton said, “Without a doubt … especially from new Canadians who have bided their time, played by the rules, sometimes years before they gain entry and, once they do, the pride they have with being here … they take quite objection to what appears to them as, frankly, a way to skirt the rules.”

If Canadians weren’t concerned about immigration, it wouldn’t be making headlines like it has in recent years, Rempel said.

“If immigration policy is done right, it’s not a political issue; it kind of hums along in the background.”

Ontario Winter Games experience 'very rewarding' for athletes (5 photos)
Feb 28, 2020 8:00 PM
Comments
We welcome your feedback and encourage you to share your thoughts on this story. We ask that you be respectful of others and their points of view, refrain from personal attacks and stay on topic. To learn about our commenting policies and how we moderate, please read our Community Guidelines.