Grape Island dispute drags on; working group will explore alternate locations on shores of both local lakes
Sep 12, 2018 10:30 AM By: Dave Dawson 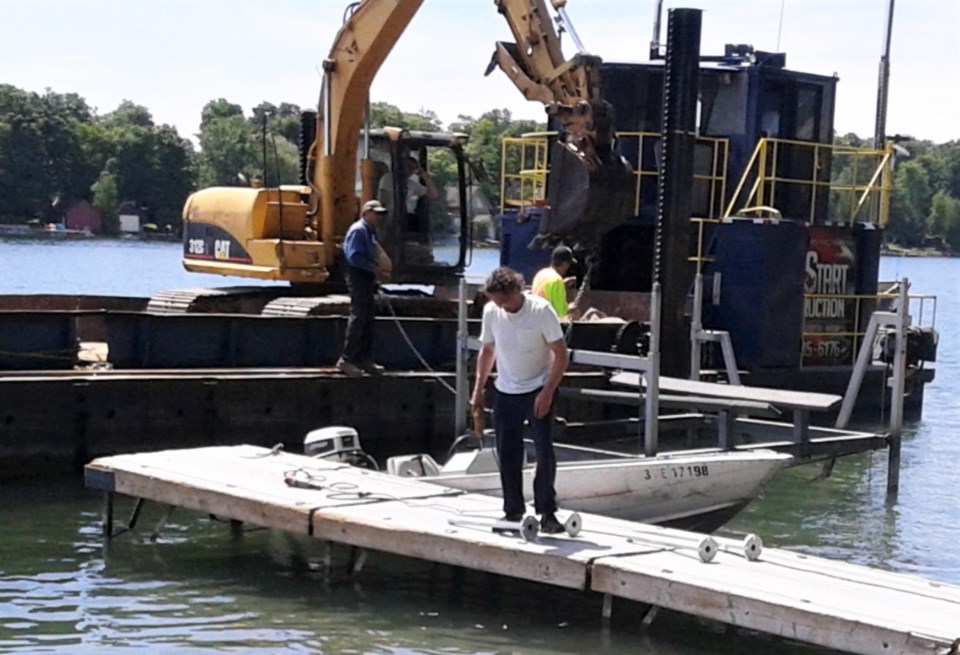 This is the dock in question at Forest Avenue South. Neighbours have various concerns about the dock and its use by residents of Grape Island.

It will be at least a year – likely much longer – before there is any real resolution in a long-simmering dispute between Grape Island residents and those on land in the Forest Avenue area.

After months of talks between the two sides broke off last year, the matter ended up in the hands of city councillors.

Finally, in January, an interim solution was brokered and a temporary use bylaw was enacted that, essentially, allows for commercial barging Tuesdays, Wednesdays and Thursdays from May to October, permitting the continuation of what has been occurring at the Forest Avenue South access point for two years.

That short-term solution also allows the Grape Island Property Owners Association (GIPOA) to use a temporary dock; the various encroachments of existing shoreline structures that do not comply with zoning bylaw provisions can continue to exist during the duration of the temporary bylaw.

That temporary bylaw is in place until 2020. In the meantime, a more permanent solution is being sought. To that end, a working group was formed to negotiate a long-term remedy.

However, this week, city councillors learned that in the eight months since the working group was formed, there has been little progress.

On Monday night, council committee voted to allow the working group to expand their mandate to explore alternate locations for commercial barging other than Forest Avenue. That decision needs to be ratified at Monday night’s council meeting.

Expanding the scope will lengthen the time it takes to find resolution.

As a result, Thompson estimates it would take six to 10 months to explore those options.

“The thing we would need to do is to seek the feedback of qualified professionals to first understand what criteria we’re looking at,” said Thompson.

According to the report presented to councillors, the working group must investigate location, water depth, compatibility with neighbouring land uses and also examine the current availability and costs of operating from local marinas.

In addition, a financial analysis of potential sites will be required to fully understand any cost implications to prepare the site for commercial barging (property acquisition, legal fees, pier/dock facilitation).

But, Thompson stressed, none of that work will begin until the second quarter of 2019 because staff is simply too busy.

That did not sit well with Coun. Ralph Cipolla.

“This has gone on for too long,” he said. “People need a solution fairly soon … not another year down the road.”

Cipolla wondered if consideration was given to hiring someone to take on the work.

However, city CAO Gayle Jackson said that was not possible because there is no available budget to add extra staff.

In the end, council agreed to expand the group’s mandate and allow research into other potential commercial barging sites.

The temporary bylaw will continue to be in place in the interim – until 2020.