Wendy McQuaig was worried about impersonal nature of video chat but has spoken to a child in his playroom and an adult in a canoe during the pandemic
Oct 5, 2020 1:55 PM By: Nadine Yousif 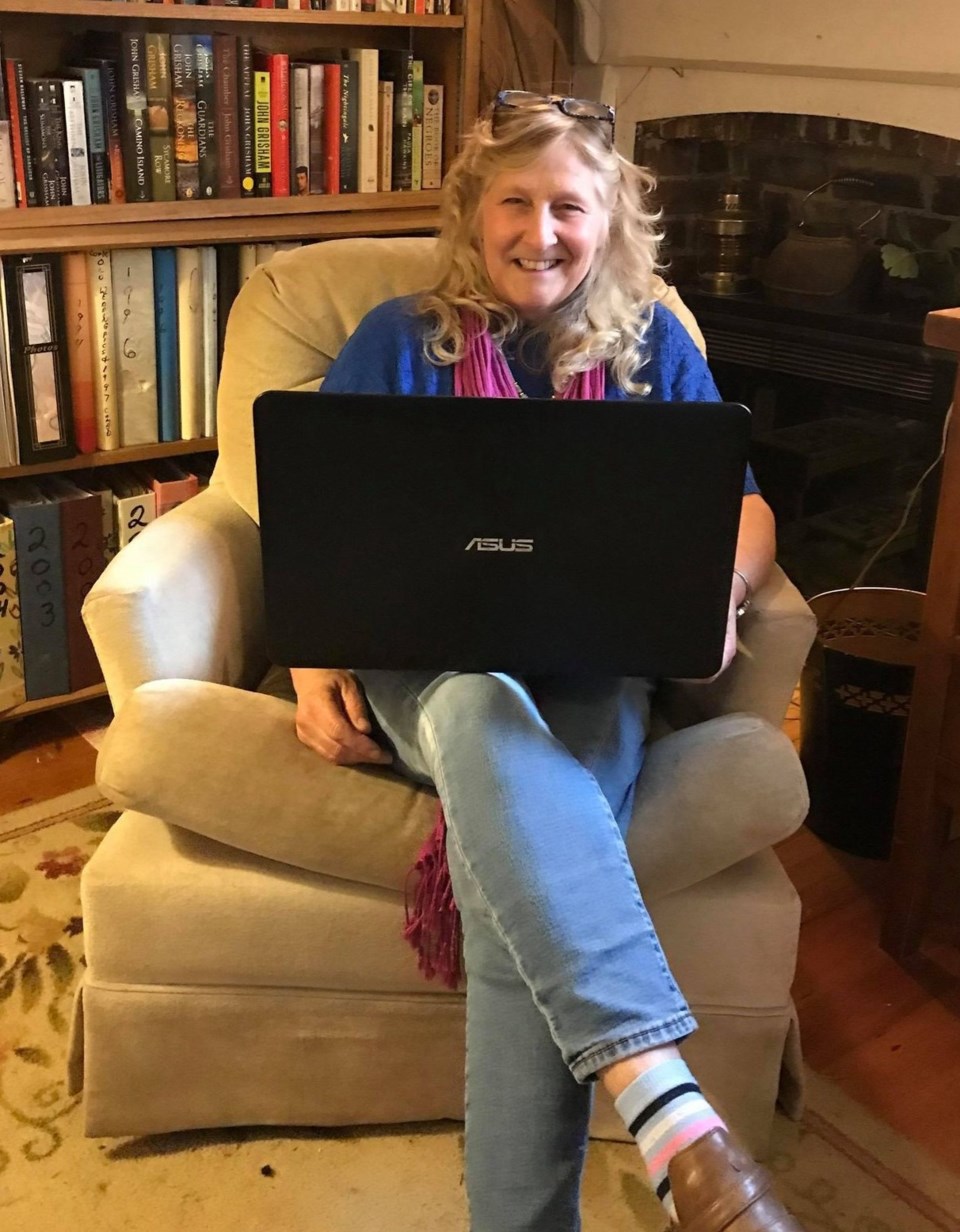 Orillia psychotherapist Wendy McQuaig has shifted her practice online due to the coronavirus. It's been a learning curve for both her and her clients. Contributed photo

Wendy McQuaig has owned and operated her psychotherapy practice in Orillia for the better part of her 30-year career. But the last six months have brought many firsts.

One was attempting to play Lego with a child during a therapy session on Zoom. Another: taking a call from a client who happened to be on a canoe — the only place they were able to find privacy during a cottage trip.

These unlikely backdrops for intimate mental health conversations have replaced conventional comfy couches and private psychiatrists’ rooms across the country, as the COVID-19 pandemic forced many aspects of health care, particularly mental health, onto computer screens.

“When clients used to come and see me, I would get them a cup of coffee or tea and we’d sit in my meeting room,” McQuaig reflected. “It makes people feel at ease; be able to talk about things on their mind.

“Now it’s a little different when you’re doing it over a computer.”

Psychiatrists and psychotherapists like McQuaig have shifted their practice entirely online since March when the coronavirus spread in Canada and social distancing measures became mandatory, relying on Zoom or other telemedicine video chat platforms to connect with clients. Other times, a simple voice call would suffice.

Existing virtual mental health-care services, like Talkspace, which offers text messages and therapy sessions, have also seen a spike: Talkspace reported a 65 per cent increase in clients since the pandemic began.

Virtual mental health care even received some political support, with Prime Minister Justin Trudeau announcing in May the allocation of $240.5 million “to develop, expand, and launch virtual care and mental health tools to support Canadians,” in response to the virus. Provinces have also since added billing codes for psychiatrists offering virtual care visits.

COVID-19 has fast-tracked virtual care in a health field that has long hoped for technological advancements to pave the way for remote offerings of services, with a body of research dating back decades that reveals online mental health services could be just as effective as those done in-person. But progress has been slow — until the pandemic forced the hands of many to shift operations online almost overnight.

Now, a mix of political enthusiasm and necessity under the pandemic has experts wondering: is the future of mental health services virtual?

“When I did my training at the Centre for Addiction and Mental Health about two decades ago, no one talked about telepsychiatry except for a handful of doctors,” said Dr. David Gratzer, a psychiatrist at CAMH who recently authored an editorial on the future of virtual mental health in the Canadian Journal of Psychiatry.

Much has changed, Gratzer said. Every resident at CAMH is now trained in providing mental health services virtually. Despite this, around only 338 psychiatric visits were done online in February at CAMH.

Gratzer said he believes the slow push toward virtual mental health prior to the pandemic points to a conservative mindset in health care that is traditionally resistant to big changes.

Indeed, a report that dates back to 2014 by the Mental Health Commission of Canada said using technology to detect or treat a physical illness is common, but not for mental health problems or mental illness “due to significant resistance and misunderstanding.”

CAMH offered virtual psychiatry visits before the pandemic for a handful of patients who required mental health support but lived in rural areas with no direct access to services, Gratzer said. But for psychotherapists like McQuaig, it was generally rare to see clients virtually.

“Up until COVID-19, I did everything in person,” said McQuaig, who usually sees about 40 clients on a regular basis.

She said around a quarter of her clients first decided not to continue with their therapy sessions virtually when social distancing measures were first enforced in March, though about half have since returned to virtual care.

“I think they were thinking (the lockdown) wouldn’t last very long and they’d come back in a month,” McQuaig said, proving that some patients have remained virtual out of necessity and lack of options, as most providers have shifted to online services.

Others say they’ve grown to prefer speaking to their psychotherapist over the phone or video chat instead of going to see them, like Madi Cyr, a 22-year-old Humber student who accesses counselling through the Mindful Living Centre in Milton, typically attending one session a week.

“I had to originally commute about an hour, because this was one of the centres that was covered by my insurance,” said Cyr, who lives in Oakville, adding the commute was difficult to manage between classes.

There are some things Cyr misses about in-person counselling, like the routine it gave them—a reason to get up early and go out. But waking up has become harder as pandemic and other global worries mount.

Cyr said not much has changed in terms of how helpful the sessions are. “If anything, it’s nicer because I get to play with my fidget toys and focus and get myself back on track when I need to.”

There are some technical drawbacks, however, like overcoming faulty technology or a bad internet connection. Cyr said they and their psychotherapist use a combination of telemedicine services to connect, like Doxy.me or VSee, as one may fail on any given day. Sometimes, they’d resort to a voice call.

Some have struggled more with virtual care, like Brandon Graziano, a 29-year-old from Kitchener who commuted to Toronto to see his psychiatrist for his bipolar disorder, but has reverted to voice call sessions since the pandemic. A video portal like Zoom was not provided by his psychiatrist for confidentiality reasons, he said.

“I'm still trying to determine what makes me manic, or what manic me looks like ... so, over the phone it’s hard to pick up on irritability,” Graziano said via e-mail, adding he believes body language plays a big part when it comes to mental disorders — a cue his doctor has not been able to identify over mobile sessions.

“Is it the same? Absolutely not, but it has been beneficial to me by still at least having this phone call.”

McQuaig said she worried the impersonal nature of a video chat would affect her ability to connect with her clients, who range from children to adults to couples. She’s come to find, however, that seeing them through a screen in their homes has unlocked a new layer of connection.

“I’ve had one little boy show me all his toys, he walked me around his playroom and showed me his action figures,” she said, adding seeing people in the places they call home has led her to understand her clients better.

Research has traditionally been on the side of virtual mental health care: a study published in the American Journal of Psychiatry in 1999 on telepsychiatry concluded patients had the same amount of satisfaction and ability to develop rapport in both televideo and face-to-face interviews. A similar study on virtual mental health in 2013 found it effective for diagnosis and assessment across age groups, and said it is comparable to in-person care.

There are drawbacks, as Gratzer outlines in his Canadian Journal of Psychiatry editorial. Virtual mental health is less proven to be effective for people with severe disorders, Gratzer wrote, largely because many are poorer and have unstable living conditions, which limits their technological access.

There are also high dropout rates for psychotherapy methods not guided by a human therapist and concerns about patient privacy, confidentiality and finding service delivery methods that are reliable.

But virtual mental health offerings have also expanded access to many in far or remote areas who otherwise wouldn’t have access to that same care. McQuaig said since the pandemic, she’s picked up more clients from the GTA despite being based in Orillia.

As the number of coronavirus cases picks up across Canada and with public health experts confirming Ontario is now in a second-wave of infection, many psychotherapists, including McQuaig, have continued to only offer services online at the moment.

Gratzer said a handful of his patients have since returned to in-person sessions, but it’s too early to tell how many will drop virtual counselling altogether in favour of a return to in-person.

He added more research and monitoring of patients’ experience is needed to inform how virtual mental health care offerings can better be expanded in the future. Provinces, he added, should maintain the ability for psychiatrists to bill for virtual sessions.

Ontario’s Ministry of Health said in an email that it plans to develop an overarching services framework that will support the development of government guidelines on how to deliver virtual mental health care effectively.

It’s yet to be seen, however, whether the option will remain popular with patients.

But one thing is certain: the pandemic has changed the way McQuaig will offer her psychotherapy services in the future, as she plans on continuing both in-person and online sessions if the threat of COVID-19 vanishes.

“It’s funny, because prior to March, I never did this,” McQuaig said.

But shifting to virtual, she added, has been a fascinating process — her reach has expanded beyond the four walls of her office, allowing her to connect with clients in their bedrooms, their cars, and even their canoes — opening up new doors to her practice for years to come.

Nadine Yousif is a Toronto-based reporter for the Toronto Star covering mental health. Her reporting is funded by the Canadian government through its Local Journalism Initiative.