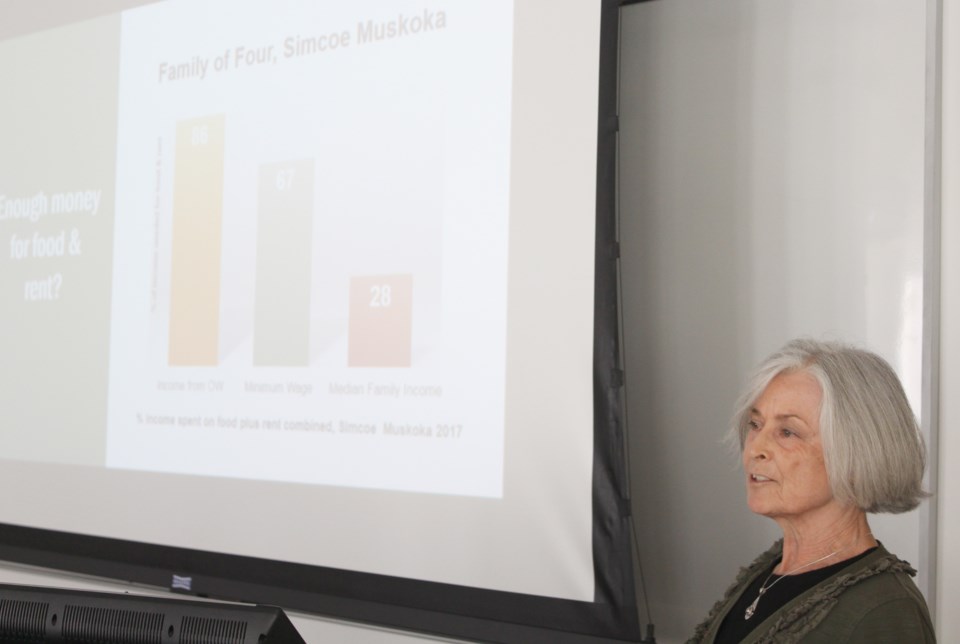 University students are hungry for more than knowledge.

Food insecurity among post-secondary students is a “deepening problem,” Lakehead University assistant professor Barbara Parker told an audience Tuesday during a Research and Innovation Week presentation at the Orillia campus.

A 2016 study by Meal Exchange, the results of which were published in Maclean’s magazine, surveyed more than 4,000 students in Canada. Lakehead shared the unfortunate first place with Dalhousie University for having the highest rate of students experiencing food insecurity: 46 per cent. What further set Lakehead apart was 14.7 per cent of those surveyed were “severely food insecure,” while that figure for Dalhousie was 9.1 per cent.

“When we got highlighted in Maclean’s for our 46 per cent food-insecure rate, we heard from admin,” said Parker, who works out of Lakehead’s Thunder Bay campus.

So, Lakehead decided to take the lead on learning about and addressing food insecurity. A committee has been formed at the Thunder Bay campus, consisting of students, faculty and administration.

Lakehead also conducted its own research, which included information from the school’s food bank at the Thunder Bay campus. There were 1,200 unique users in 2017, up from a few hundred in 2015, when the food bank began tracking usage.

The real figure could be higher, as “there is a lot of stigma associated” with using food banks, said Parker, who is with Lakehead’s Department of Sociology.

She highlighted three main areas when it came to those at risk of food insecurity: Indigenous students, international students, and parents.

Eighty per cent of Indigenous students who were surveyed were found to be “severely food insecure.” One of the students said, “I was willing to give up everything to finish my degree.” Another student shared, “We starve for a day sometimes.”

Most international students were found to be “moderately food insecure,” as were 60 per cent of parents.

“We need to advocate for better supports for students,” Parker said.

One issue is “food deserts” on campus. There is often a lack of places to store food on campus and a lack of food choices, and the food that is available is often cost prohibitive. It’s a perfect storm for poor students who spend long hours on campus.

Food insecurity should not be normalized by the “starving student” stereotype, Barker said.

Barker’s presentation was part of the Panel on Poverty and Civic Engagement. A representative from the Simcoe Muskoka District Health Unit also addressed the audience during the event.

Jane Shrestha, a public health nutritionist with the health unit, and a registered dietitian, noted food insecurity affects about 70,000 people in the region. Eighty-six per cent of those on Ontario Works are food insecure, while that figure is 67 per cent for those earning minimum wage and 28 per cent for those with the median family income.

“We have evidence that tells us food insecurity affects the physical and mental health of people of all ages. It’s also a drain on our economy,” Shrestha said. “We are talking about a problem of significant importance.”

The health unit has been raising awareness about food insecurity through its campaign called No Money for Food is Cent$less. Since the campaign began in 2016, the health unit has created a page on its website and has spread the word through the media.

Policies that could tackle food insecurity, according to the health unit, include a basic income as well as social assistance that covers residents’ necessary costs. It's an election year, she added, encouraging people to find out where candidates stand on the issue and what they plan to do about it.

Paint your pumpkins purple to raise awareness about epilepsy
Oct 23, 2020 7:30 AM

Masks are not just for Halloween or hold-ups anymore!
Oct 22, 2020 8:15 PM
Comments
We welcome your feedback and encourage you to share your thoughts. We ask that you be respectful of others and their points of view, refrain from personal attacks and stay on topic. To learn about our commenting policies and how we moderate, please read our Community Guidelines.