Cody Burnett went from working at a call centre to making $150K a year; 'I’ve had rappers, musicians and baseball players, like from the New York Yankees' watch
0
Jan 17, 2020 1:30 PM By: Jessica Owen 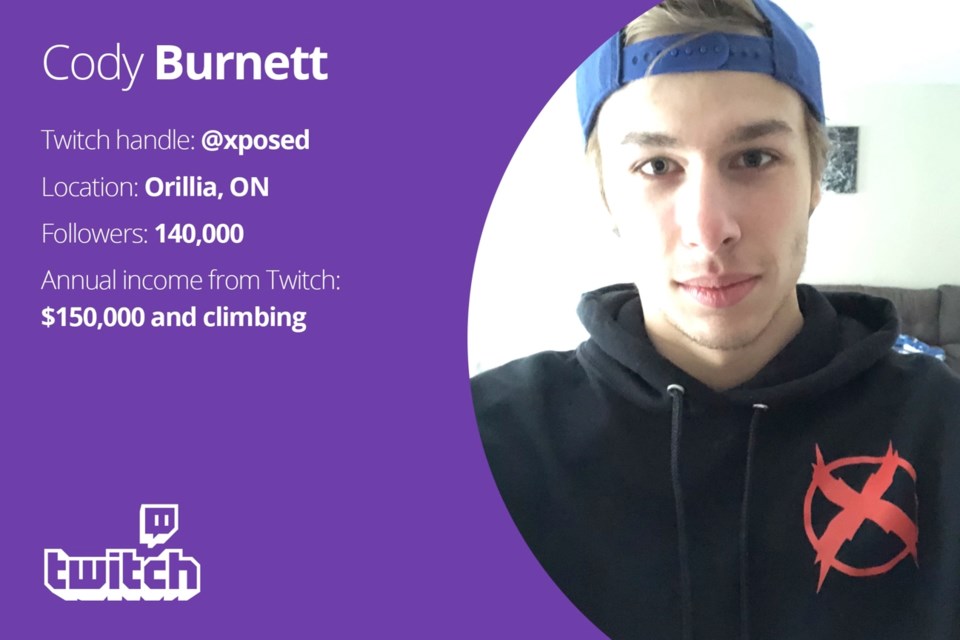 Editor's Note: This is Part 1 of a three-part series on local online influencers. Watch for Part 2 tomorrow.

For most of the month of January, Twitch streamer @Xposed is in Twitch jail.

“Right now, I’m on a 30-day suspension, so it’s kind of a crappy time,” he said. “I was doing a giveaway for my subscribers at Christmas time, and when I pressed ‘randomize’ to choose a winner it exposed private emails on the stream. I’m trying to appeal it.”

“So, for right now, I’m having some time off, I guess you could say,” he said, with a laugh.

Will keep everybody updated on the return tonight.

Reply with a 🤞 so we can get some luck on our side from the twitch gods.

Twitch is the world's leading livestreaming platform for gamers. Influencers on Twitch livestream themselves playing a variety of gaming titles such as Fortnite, League of Legends and eSports titles while adding an entertainment component that can see them rise in the ranks.

Burnett has about 140,000 followers on Twitch, playing Call of Duty almost exclusively, and claims to be one of the top-5 streamers worldwide for the game on the Twitch platform.

About three years ago, Burnett was working as a customer service representative for Bell Canada.

“All the time, I would be distracted. I was doing Twitch on the side. I’d spend time researching ways to get a bigger (following). I was influenced by a lot of different streamers and I knew I could do it too,” he said.

Growing up in Orillia, the Twin Lakes Secondary School graduate says he always stood out a bit from his peers.

“I’ve always kind of been the funny guy. When I was growing up in high school and people would ask me what I wanted to do (when I grew up), I never really knew. I always enjoyed playing video games and I would compete in online tournaments for money, and I knew I was kind of funny,” he said.

Burnett’s entertainment style on streams can include dancing and stunts, in addition to playing the game and participating in missions.

Money can be made on Twitch through a few different avenues.

After creating an account, once a channel reaches 100 followers, they become an affiliate, which means you partner with the Twitch platform and share any advertising revenue made through streams. There is also a pay-to-subscribe option for avid gaming fans, where they can pledge as low as $5 a month to be notified when their favourite streamer starts a video.

Burnett has more than 5,000 of his subscribers paying $5 a month for his content.

“As you move up in the (viewership) rankings on Twitch, you’ll get more money,” he said. “You can also make money through ‘tips,’ kind of like if you tip your waiter. If you put on a good show, sometimes people will just send you money just to say, ‘Thank you for making my night.’”

The largest tip Burnett has received came in at more than $1,000.

Between tips, Twitch ad revenue, some paid partnerships with groups such as GfuelEnergy, ScufGaming (a controller company), LG and subscriptions, Burnett estimates he brings in more than $150,000 annually, and that number is only growing.

“Twitch is where the money is, honestly. Anyone who goes anywhere else is definitely getting paid less,” said Burnett.

“I’ve had NBA players reach out to me to tell me they’re watching the stream. I’ve had rappers, musicians and baseball players, like from the New York Yankees,” he said.

While the life of a video game streamer may seem glamorous to the average video game lover, Burnett says there’s a lot more to it than people think.

“People say it’s really easy, or like, ‘You’re playing video games for a living, you have nothing to worry about.’ That’s not really the case at all,” said Burnett.

“To be good at it, you have to put everything into it,” he added.

Burnett said that while he typically streams live constantly between the hours of 10 p.m. and 4 a.m., during the day he is responding to fans on Twitter and Instagram, as well as uploading YouTube videos of key parts of streams to try to get some additional side engagement.

“I’m also always trying to brainstorm fresh ideas. You don’t want it to get old. I work extremely hard. Not everyone could do this. It isn’t for everybody,” he said.

When rising through the ranks as a streamer, Burnett said he noticed he had less and less time to himself outside of work.

“When you work a regular job Monday to Friday, you have Saturday and Sunday to yourself. Many weeks, I don’t have a day off. I’m constantly working,” he said.

Looking to the future, Burnett has even bigger online aspirations.

“I see myself blowing up even bigger, honestly. I’d like to see myself being one of the biggest influencers on Twitch,” he said.

Watch for Part 2 tomorrow, where we put the spotlight on local Instagram models.