This cat's a ham, and it's made him famous 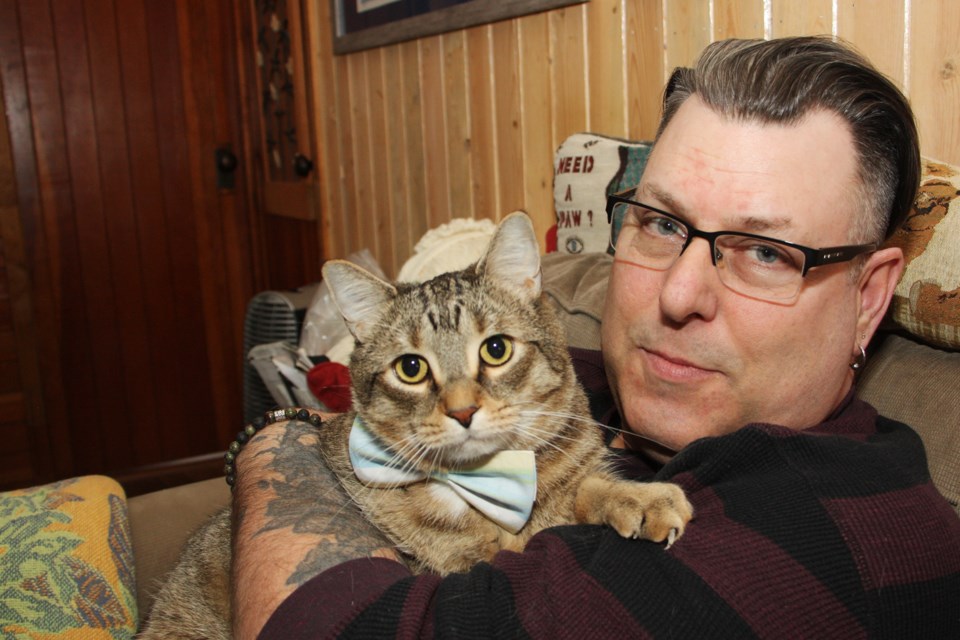 Eddie and Dave Kergan have become Internet famous local celebrities in Wasaga Beach. Eddie with his collection of 250 bow ties is now the spokescat for GTHS cupcake day, and heâs cookinâ up a recipe for the occasion. Erika Engel/CollingwoodToday

Eddie Kergan is a model citizen and ambassador for Wasaga Beach.

He’s an honorary scout, a promoter of local businesses, a voice for a local charity campaign, a supporter of Wasaga’s events, he’s featured on the cover of a charity calendar, and he ran for mayor in the last election.

People around the world know about Wasaga Beach because of the work the well-dressed Eddie Kergan is doing with daily posts on different aspects of the community.

His grammar and spelling aren’t great, but it’s hard to pronounce some words with fangs and lips that don’t pucker.

Eddie Kergan is, after all, a cat.

More specifically, he’s a 20-pound tabby with a collection of 250 bow ties and fans across the globe who call themselves Eddiots.

Eddie lives in Wasaga Beach with his humans Dave, Chris, and Johanne Kergan. He came to live with them at six weeks old as a rescued kitten from a shelter.

Technically he was a Father’s Day present for Dave’s mom Johanne, but Eddie bonded with Dave first, and did some rescuing of his own.

Dave is a wood carver, and he and his wife Chris are known locally as Eddie’s mom and dad. At 16, Dave was a passenger on a motorcycle his friend was driving when the two were struck by an impaired driver. Dave’s friend died within minutes, Dave took the impact to one of his legs.

Physically, Dave walks with a limp due to a fused knee, and mentally, he suffers from Post-Traumatic Stress Disorder and flashbacks.

Eddie watches over Dave on the bad days, helping him come back to a lighter place.

“He’s been a real lifesaver,” said Dave. “It’s almost like he looks beyond it. He stays right beside me the minute anxiety or depression hits.”

Though it’s no cure to have Eddie’s round, flax yellow eyes watching him while he works, plays video games, or rests during an anxiety attack, it has reduced the amount of time it takes for Dave to pull through the low points.

“He has a grounding effect, and it breaks the anxiety,” said Dave. “It helps break the chain, and I can calm down and handle it.”

Then one day, Dave found a bowtie in a pet store, and decided to try it on Eddie. Since then, Eddie’s been putting smiles on people’s faces all over the world.

“He got mad when I tried to take it off,” said Dave of that first bowtie.

Obviously, photos followed. From there, Eddie’s modelling skills and cat mannerisms inspired stories to go with the photos.

The photos and creative captions are posted daily on a Facebook group called Wasaga Beach News and Commentary.

Dave started writing tales of Eddie’s work in the Global Network of Spies, official statements from the Minister of Furin’ Affairs, and his passion for Black Forest ham from the Wasaga Beach Foodland deli counter, where his picture hangs under the title of "Hambassador."

“We have many adventures together,” said Dave. “Tongue in cheek, sort of like Calvin and Hobbes.”

As the Dali Hamza, Eddie delivers words of wisdom.

When it’s time for the motorcycle rally, he’ll wear a motorcycle bow tie.

Soon, people from across the world started sending material and bow ties to Eddie with special requests. One for Manchester after the terrorist attack, one with Poppies from England for Remembrance Day, and one with Kiwi birds from Australia.

People have reached out to Dave to share their own stories of pets, or tell him how much they love hearing from Eddie every day. Others with mental health struggles and PTSD have explained what it means to them to see Eddie in a bow tie and a smirk in their Facebook feed.

“It went from fun posts to being something deeper for so many people,” said Dave. “He seems to be a universal ice breaker.”

An anti-bullying message Eddie delivered was used in lessons at local schools, and a Toronto Maple Leafs post is still one of the most widely shared of his daily adventures.

If anyone so much as suggests Eddie posts don’t belong in the Facebook group, they are met with the vehement defence of the bow tie cat by Eddiots, and a stream of verbose comments on the merits of Eddie posts outweighing their outlandish idea he should be removed from the group.

Such is the age of internet celebrity of the feline variety.

Gifts have poured in for Eddie and his parents. Mugs with his photo on it, buttons and t-shirts for his mayoral campaign, an ongoing supply of homegrown “Nipz” (catnip), which is totally legal in Canada.

Together, Eddie and Dave have worked on various campaigns to raise money for the Georgian Triangle Humane Society (GTHS). Eddie is the cover cat for the charity calendar, and Dave makes carved wood bow ties to sell as Christmas ornaments. He donates the proceeds to the shelter. Together, the cat and his human have raised more than $3,500 in donations.

This year, Eddie is cooking up something special for his favourite charity. He’s on a search for the “purrfect kupkakez” as the official spokescat for the GTHS annual cupcake day.

It’s a partnership that fits well with the GTHS theme of celebrating both humans and pets and the benefits both receive from pet ownership.

According to one of Eddie’s recent posts on Facebook, Eddie did some research at the Royal Ontario Museum into the cats of ancient Egypt, and his ancestor Hamzez. He’s working on a recipe with some creepy, crawly insects as the feature ingredient.

According to Eddie, dung beetles are “extwa kwunchyz," making them perfect cupcake toppers.

The GTHS National Cupcake Day is Feb. 25, and the shelter staff are encouraging individuals and businesses to get involved by throwing their own cupcake parties and raising funds for the shelter.

On Feb. 24, the shelter will host their own Cupcake Day Party from noon to 3:30 p.m., with cupcakes, outdoor games, and family-friendly activities.

For more on the GTHS cupcake day, visit the site here.

As for Eddie and Dave, they’ll keep sharing their adventures and conversations with the world in the hopes it makes some people (and cats) smile and show those pearly fangs.

“[Animals] are all here for some purpose,” said Johanne Kergan, watching her son and his cat chat about bow ties.

Georgian College turning to virtual reality in wake of pandemic
Jun 6, 2020 12:30 PM
Comments
We welcome your feedback and encourage you to share your thoughts. We ask that you be respectful of others and their points of view, refrain from personal attacks and stay on topic. To learn about our commenting policies and how we moderate, please read our Community Guidelines.