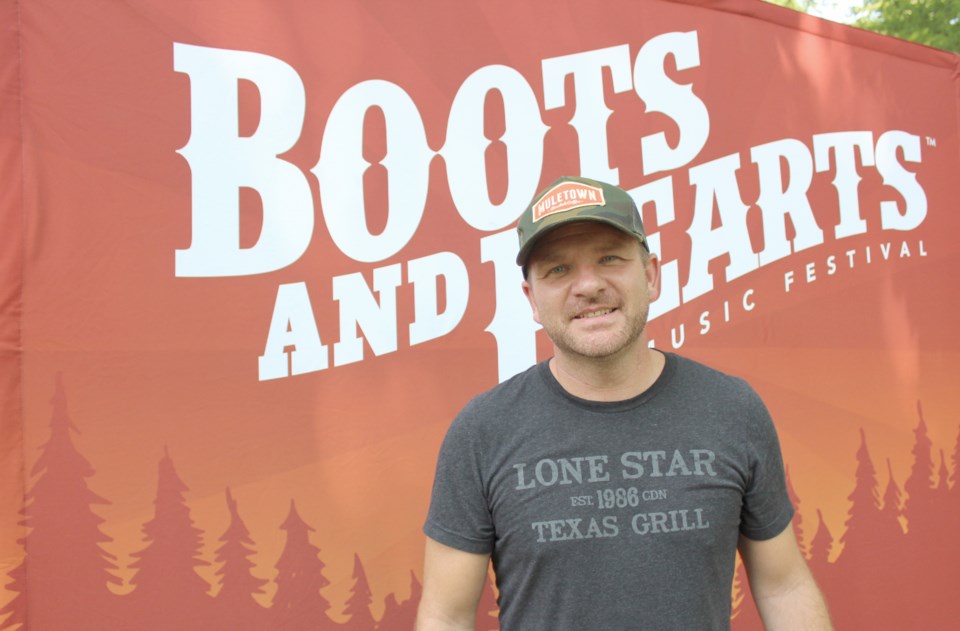 It’s been eight years since Bobby Wills released his first album, but the country musician is still trying to find his true artistic self.

“I’m just starting to settle into who I am as an artist,” Wills told OrilliaMatters on the weekend at the Boots and Hearts Music Festival in Oro-Medonte.

Finding his truth has been a theme of Wills’s life. He was a baby when he was adopted to a family in Calgary. His adoptive father was a fan of country music, and Wills caught the bug. But a passion for playing and performing wasn’t in the family.

“It was something I felt drawn to, but it wasn’t in my family life,” he said.

Two experiences stand out as playing a part in Wills deciding to pursue a career in music. The first was when he accepted a bet from friends and performed at an open-mic night in Australia. He got up on stage and sang Garth Brooks’s The Dance. The crowd loved it.

“That was probably the thing that lit the flame,” he said.

Soon after, he met his biological parents and siblings and quickly discovered their passion for music.

“Understanding that took me to the next level,” he said.

That experience has, to a degree, influenced his career.

“It just grounds you. It gives you perspective on what’s hard, what’s easy,” he said. “I was very fortunate to be adopted by a wonderful family. It’s really good for perspective.”

In 2010, he released his debut album, Man With No Past. He followed that up in 2012 with If It Was that Easy. It included the song Show Some Respect, which earned him a nomination for Single of the Year at the Canadian Country Music Awards. Two years later, he released his third album, Crazy Enough. He released an EP, In Comes the Night, last fall.

He made his first appearance at Boots and Hearts on Sunday, with a slot on the main stage.

“It’s just neat to be included. A lot of singers in my industry talk about Boots and Hearts,” he said.

The lineup at this year’s festival — which included everyone from country-pop artists to the more traditional-sounding musicians, like Alan Jackson — was reassuring to Wills, who counts George Strait and Keith Whitley among his influences.

The genre took a sharp turn toward pop in the late 1990s, but Wills feels it is “coming back around to its roots.”

“The genre is so big now. It’s become so accepting of different things. That’s part of the beauty of country music,” he said. “I don’t think it’ll ever be what it was, and that’s cool, too.”

Find out more about Wills here.