Orillia Girls Hockey Association proud of all Hawks teams for 'another great year of fantastic hockey'
Apr 11, 2018 10:30 AM By: OrilliaMatters Staff 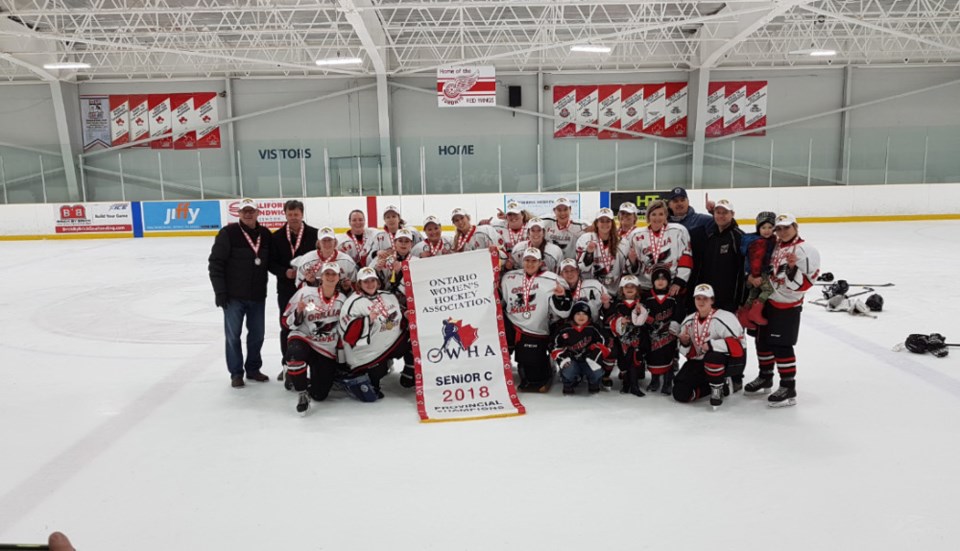 The Orillia Hawks Ladies Senior C team defeated Lucan to win a gold medal at the provincial championship on the weekend. Supplied photo.

The team went undefeated in the round robin games, winning 4-1 vs. the Milverton Senior C team; 4-1 vs. the Kirkland Lake Powerblast and 5-1 vs. Toronto Leaside. Truly a team effort: Caitlin Kubiseski – credited with five goals and an assist, Haylee Lawlor netted three goals with two assists, Jasper Thomson with a pair of goals and assists, Stephanie Oates netted a pair and earned an assist, Brittney Bince scored once and assisted on one, team Captain Danielle Jeffreys had a pair of assists, and Carly Marshall, Carly Turner, Katie Zubrickas, Cora Lee Shilling, Layne Lampshire and Betsy Maus all contributed assists. Goalies, Robin Root and Gaby Mondelli, shut down the competitors allowing only one goal each during round-robin games.

In the semifinals vs. Milverton Seniors, Orillia earned a 3 – 1 victory with Haylee Lawlor scoring a pair and Jasper Thomson scoring one, Gaby Mondelli shut the competitors down by allowing only one goal.

The gold-medal game vs. Lucan Irish Team ended in a 4-3 victory for the Hawks. This was an excellent game with everyone contributing in the victory. Haylee Lawlor netted the winning goal with 5:41 on the clock. Haylee was credited with a pair of goals and an assist, Brittney Bince and Jasper Thomson each scored one. As well, assists went to Danielle Jeffreys, Caitlin Kubiseski, Layne Lampshire and Haylee Lawlor. The Lucan Irish pulled their goalie with 1:15 on the clock yet Robin Root in net shut down the opposition by denying them a goal in the last 8:29 minutes of the game.

Special thanks to the team staff, Jamie Robinson, Ron Robinson, Jeff Rae and Ken LaCroix for working with the team and helping to ensure their success at provincials. As well as all the support of our awesome fans! An amazing end to a successful weekend for our gold medalists, the Senior C team!

Four other Hawks teams competed at the 2018 provincial championships. The Multicare Group Bantam B team skated to a perfect 3-0 in the round-robin series before losing to the eventual bronze medal winning team from Walkerton in the quarter finals by a score of 1-0.

The Watson’s Kaby Lodge Peewee B team also lost in the quarter finals. The Hawks lost on a penalty shot in double overtime to the Waterloo Ravens by a score of 3-2.

The Tryon Construction Atom B team lost their first two round-robin games before battling back and winning their third game with a 4-2 score against the Walkerton Capitals.

The Hawks Senior B team finished with a 1-1-1 record after the round robin series and narrowly missed out on advancing in the tournament.

The Orillia Girls Hockey Association is very proud of all of their Hawks teams for another great year of fantastic hockey. Congratulations ladies!