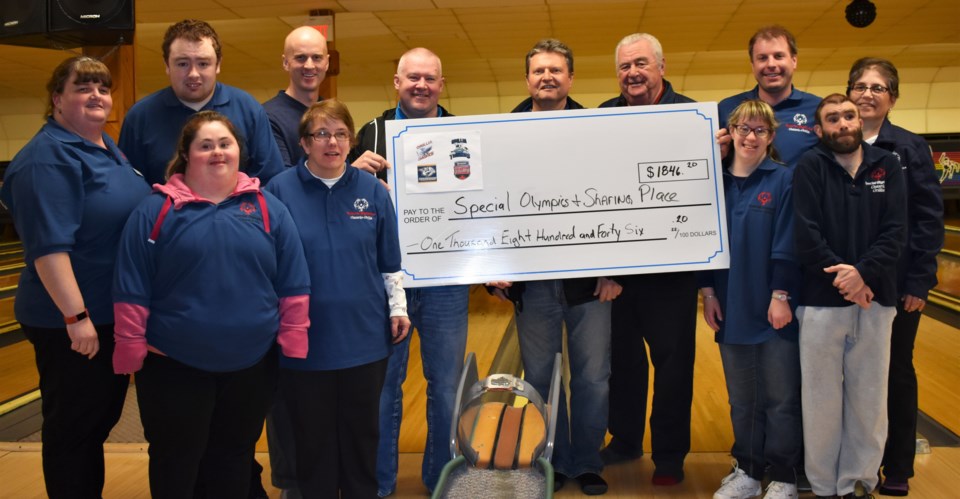 A cheque for $1,846.20 was presented to a pair of local organizations Tuesday night at Orillia Bowl. The Sharing Place Food Bank will receive about $1,200 of the proceeds from the Hometown Hockey barbecue, with the remainder going to Special Olympics Orillia. Above are local Special Olympians along with Darrin Dunn, vice-president of the Orillia Girls Hockey Association, Dave Dunn, an executive with the North Central Predators, Paul Munro, vice-president of the Orillia Minor Hockey Association and Chris Peacock, executive director of The Sharing Place. Dave Dawson/OrilliaMatters

On the first weekend of November, Orillia was the centre of the hockey universe as Rogers Hometown Hockey came to the city’s waterfront for its weekly national broadcast.

The three-day event culminated on the Sunday night when the pre-game show, prior to the featured NHL game between Chicago and Montreal, focused on Orillia and its deep hockey roots. Co-hosts Ron MacLean and Tara Slone shared stories about Orillia legends past and present.

As part of the festivities at the Orillia waterfront, there was a stage for live music, a ball hockey rink, selfie stations, interactive exhibits and other activities. There was also a community fund-raising barbecue.