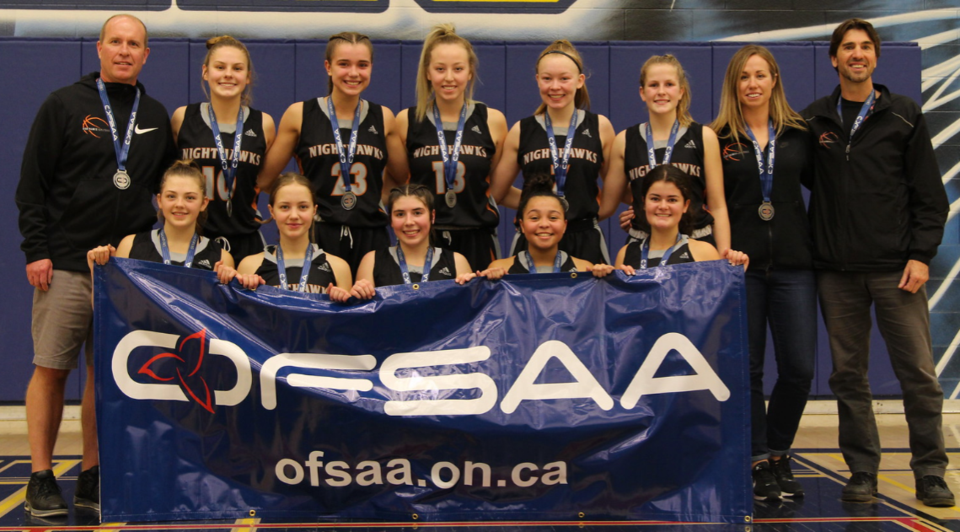 The Orillia Secondary School (OSS) senior girls’ basketball team is going down in history as one of Orillia's most decorated teams and the players believe they still have lots of room to improve.

The Nighthawks went into the Ontario Federation of School Athletic Association (OFSAA) tournament in Mississauga last week ranked as the No. 6 team in the province.

After three days of intense action against the province's top teams, OSS wrote its name in the history books as the first team from OSS to medal at OFSAA. It's also the first time a girls' basketball team from Orillia reached the top four at the provincial high school championship in the AAA division. (Patrick Fogarty Catholic Secondary School, a AA school, finished in the top four several years ago).

Incredily, this magical run almost didn't get out of the starting gate. At the beginning of the season, there weren’t enough senior students who were interested in trying out. As a result, the coaches brought up five Grade 10 students to fill in the gaps.

Despite not feeling disadvantaged by their age and lack of experience, the girls acknowledge how rare and remarkable it is to have the kind of success the team has had when half the team is comprised of Grade 10 students. Typically, senior teams are made up of Grade 11 and Grade 12 students.

Rhys Bazuk, another Grade 10 student, was one of OSS’s key contributors at OFSAA. She says that one of the factors in the Nighthawks' success was their years of experience playing together before high school.

“Most of us have played together since Grade 5 through summer teams, Lakers and playing in Barrie as well,” Bazuk explained.

The Nighthawks season was no fluke. The players and coaches set out their goals and expectations at the beginning of the season and everything went according to plan - except the final step.

"I don’t think we expected to go that far, but we knew the competition and played them throughout the season and we knew what we were capable of," said another Grade 10 contributor, Anna Glass. "It was really exciting to make it to the final" at OFSAA.

On Friday, the Nighthawks held third seed Glebe College Institute from Ottawa to zero points in the first quarter and overcame some injuries and fouls to win 42-33 and advance to the medal rounds.

This was the turning point for the Nighthawks; the hard-earned momentum allowed them to elevate their game to the next level.

“When we beat the third seed Glebe, we knew that was the turning point. After that, we knew we had a chance,” said Smith, 15.

“They were ranked higher, so we knew we kind of had nothing to lose," said Amy Hagman, who led OSS in scoring at OFSAA, netting 93 points at the tournament.

"We played hard and maintained a good lead and it kind of slipped away from us, but once we were able to regain it again and win, it was a really big accomplishment," said Hagman.

The Nighthawks advanced to the semi-finals where they matched up with Richview Collegiate Institute from Toronto on Friday night. OSS won 55-31, advancing to the biggest stage in the provincial tournament.

However, the Nighthawks came up short in the finals, losing to St. Thomas More Catholic Secondary School from Hamilton, 57-31. Despite the loss, the sense of achievement was the only feeling left with the Nighthawks players and coaches.

“We weren’t upset. We were all smiling and it’s crazy to think that we came out second in the province coming into the tournament sixth for AAA,” said Hagman, another Grade 10 player.

“It’s exciting to know that our team made history and we were all a part of it,” Hagman added.

The advantage to having such a young team for the Nighthawks is that many of the players have two more years of growth and development, and they have two more shots at getting back to the OFSAA finals and making even more history.

“I think we can win OFSAA if we all come back and keep playing as a team as we did in the finals," Hagman said. "Since we are going to continue to grow over the next year, we are all going to get better as players and mature more, so I think we could win next time."

Two of those five years ended in a quarterfinalist finish. Now a finals finish gets added to their impressive resume with a silver lining - a chance for gold next year.

Scheifele, Ekblad lead way on Barrie Colts all-time roster
May 24, 2020 3:45 PM
Comments
We welcome your feedback and encourage you to share your thoughts. We ask that you be respectful of others and their points of view, refrain from personal attacks and stay on topic. To learn about our commenting policies and how we moderate, please read our Community Guidelines.