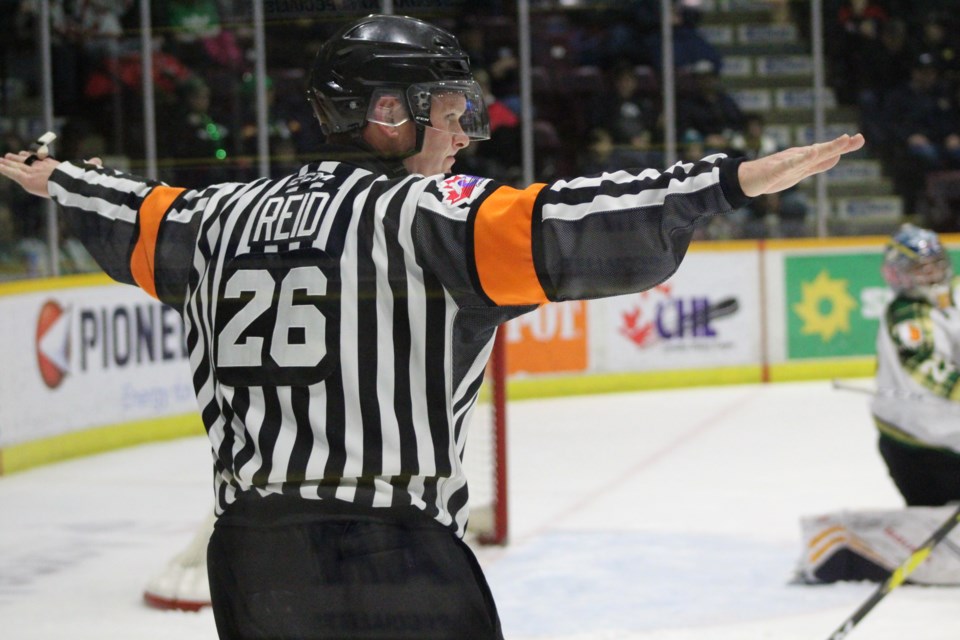 Referee Sean Reid signals 'no goal' during OHL action between the Barrie Colts and the Niagara IceDogs at the Barrie Molson Centre in this file photo from last season. Raymond Bowe/BarrieToday

Additionally, the League has honoured a pair of its distinguished alumni with new names for two awards presented annually.

A new OHL award has been established for the 2019-20 season. The Jim Gregory General Manager of the Year Award will be presented to the general manager who best excelled at his role during the regular season as chosen by the league’s 20 general managers and a panel of print media.

One of the game’s great builders, Jim Gregory was inducted into the Hockey Hall of Fame in 2007. A former long-time NHL general manager with the Toronto Maple Leafs, Gregory got his start by guiding St. Michael’s College School and the OHA’s Toronto Marlboros to great success, winning a pair of Memorial Cup titles along the way.

Gregory’s managerial success extended into his NHL career as he guided the Maple Leafs to eight playoff berths over his 10-year tenure from 1969-79.

Throughout his 50-year involvement with the NHL, Gregory has made countless contributions to the growth of hockey worldwide, emerging as one of the first GM’s to identify Europe as a major source of talent while also overseeing the advent of video goal review in his role as the NHL’s Sr. Vice President of Hockey Operations.

He served as Chairman of the Hockey Hall of Fame’s Selection Committee from 1998-2014 and was a Distinguished honouree of the Order of Hockey in Canada in 2015.

Beginning this season, the OHL’s annual Goaltender of the Year Award will be named in honour of former OHL goaltender, General Manager and Chairman of the Board Jim Rutherford who was inducted into the Hockey Hall of Fame this past June.

A three-time Stanley Cup champion, former two-time OHL Executive of the Year (1993, 1994) and one of the game’s great builders, Rutherford got his managerial start with the Windsor Compuware Spitfires in 1984, building the franchise into an OHL Champion by 1988.

After overseeing a highly successful Detroit Jr. Red Wings program and serving as the OHL’s Chairman of the Board of Governors in 1993-94, Rutherford made the jump to the NHL where he’s been for the past 25 seasons.

A native of Beeton, Ont., Rutherford first hoisted the Stanley Cup as general manager of the 2006 Carolina Hurricanes and did so in back-to-back seasons as architect of the 2016 & 2017 Pittsburgh Penguins.

Rutherford’s decorated career also included 13 years as an NHL netminder between Detroit, Pittsburgh and Los Angeles from 1970-83. His junior career was spent with the OHA’s Aurora Tigers and Hamilton Red Wings before he joined the Montreal Jr. Canadiens to win the 1969 Memorial Cup.

The addition of video tablets at the penalty box as well as the installation of new overhead cameras at each blue line will enhance accessibility to video review league-wide starting this season.

Video tablets will provide on-ice officials with an additional resource. Based on their discretion, referees and linesmen will have access to video review to ensure that the correct call on the ice was made as it relates to the assessment of major/match penalties as well as offside situations when a goal has been scored.

In the case of an assessed major or match penalty, referees shall automatically review such infraction on the tablet in the penalty box to substantiate the call (including whether such penalty was assessed to the correct player) or to reduce it to a double minor penalty (in the case of checking from behind), a two-minute penalty or no penalty at all. The use of enhanced video replay shall not be utilized to assess penalties that were not called in the first instance nor shall it be utilized to increase the severity of the major penalty called.

New to the League this season, each OHL member team shall have the ability to initiate a “coach’s challenge” in situations where goaltender interference is involved in a “goal” or “no goal” call.

Accessing video tablets in the penalty box, referees will be enabled to issue a ruling in the event of a coach’s challenge.

If the coach’s challenge does not result in the original call on the ice being overturned, the team exercising such a challenge will forfeit its timeout.

If the coach’s challenge does result in the call on the ice being overturned, the team successfully exercising such challenge will retain their ability to challenge an additional call for goaltender interference and will retain its timeout.

Only one coach’s challenge per team, per stoppage will be permitted.

Craig Goslin is new Chairman of the Board

Saginaw Spirit President and Governor Craig Goslin is the new Chairman of the OHL Board of Governors.

A former two-time OHL Executive of the Year in 2006 and 2007, Goslin has been a part of the Spirit franchise since it’s inception in 2002 and has been instrumental to the success and evolution of the club off the ice. He previously served on the Executive Council in the role of Vice-Chairman and is also a former Chairman of the OHL’s Business Development Committee. Goslin has been a member of the OHL Executive Council since 2011.

Guelph Storm Governor Rick Gaetz has moved into the role of Vice-Chair after serving as Chairman for the past four seasons, concluding his tenure with an OHL Championship. Gaetz, who was a recipient of the OHL Executive of the Year Award in 2010, has served on the Executive Council since 2008.

Additional changes to the Executive sees Tim Lukenda of the Soo Greyhounds take on the role of Secretary Treasurer, Jeff Hunt of the Ottawa 67’s appointed as Officer at Large while Dr. Bob Neville of the Peterborough Petes remains on the Executive Council in the role of Past Chairman.

Orillia angler reels in big bass at CSFL event on Lake Simcoe
Aug 1, 2020 11:15 AM
Comments
We welcome your feedback and encourage you to share your thoughts. We ask that you be respectful of others and their points of view, refrain from personal attacks and stay on topic. To learn about our commenting policies and how we moderate, please read our Community Guidelines.