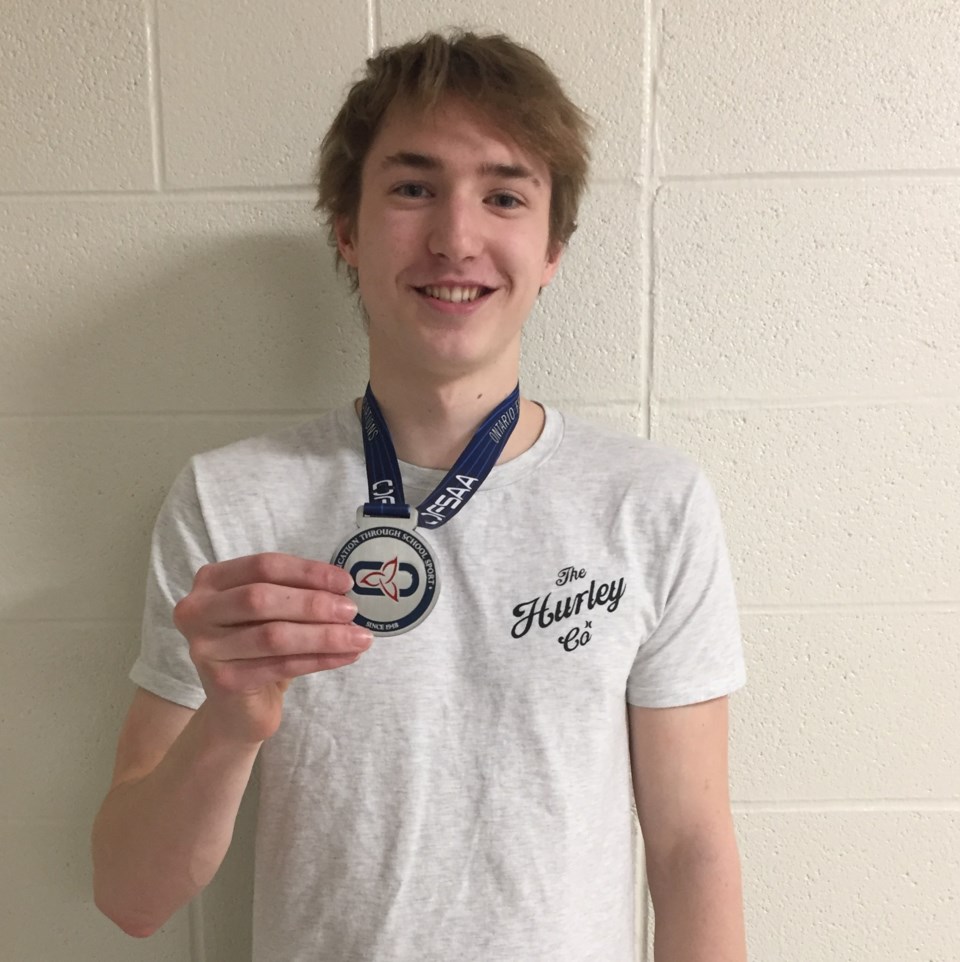 Caleb Near, a Grade 11 student from Orillia Secondary School, shows the silver medal he won this week at the OFSAA swimming championship.

Orillia swimmers made quite a splash this week at the Ontario Federation of Schools Athletic Association (OFSAA) swimming championship at the Pan Am Centre in Scarborough.

Near, a Grade 11 student, managed a personal best time of 57.07 to capture the provincial medal.

He had competed in the preliminary heat earlier that morning and ended up ranked first. In the finals, however, he was defeated by a Toronto swimmer who shattered the OFSAA record in that event.

Near clocked an impressive time of 2:09 in the event which placed him fourth overall, narrowly missing out on a bronze medal.

Charlie Pallopson of OSS also qualified for OFSAA and competed in the junior boys’ competition. Pallopson swam to a personal best time and missed earning a spot in the final by less than a second.

Rosati competed in the 100 backstroke with Near, advanced to the A division final and placed sixth among the province’s top swimmers.

Edwards made it to the B final and swam to a 9th place finish in the 100-metre individual medley.

Waite did not qualify for finals, but recorded a personal-best time.

Swimmers from all three high schools practise together at the Orillia YMCA from October to December leading up to the Georgian Bay Secondary School Athletics championship.

OSS had 38 swimmers compete at GBSSA, while the teams from the other two local high schools were considerably smaller.

In total, more than 2.000 athletes competed in various divisions and disciplines at this week’s OFSAA swimming event.

Pandemic means local trio will not get to compete on provincial stage
Apr 3, 2020 8:45 AM

Orillia figure skaters capture medals at pair of events
Apr 2, 2020 7:30 AM
Comments
We welcome your feedback and encourage you to share your thoughts on this story. We ask that you be respectful of others and their points of view, refrain from personal attacks and stay on topic. To learn about our commenting policies and how we moderate, please read our Community Guidelines.