Hard work, dedication and countless hours in the pool pay off for swimmers; 'I love the sport and all the opportunity' it's provided
0
Mar 26, 2018 8:00 AM By: Dave Dawson 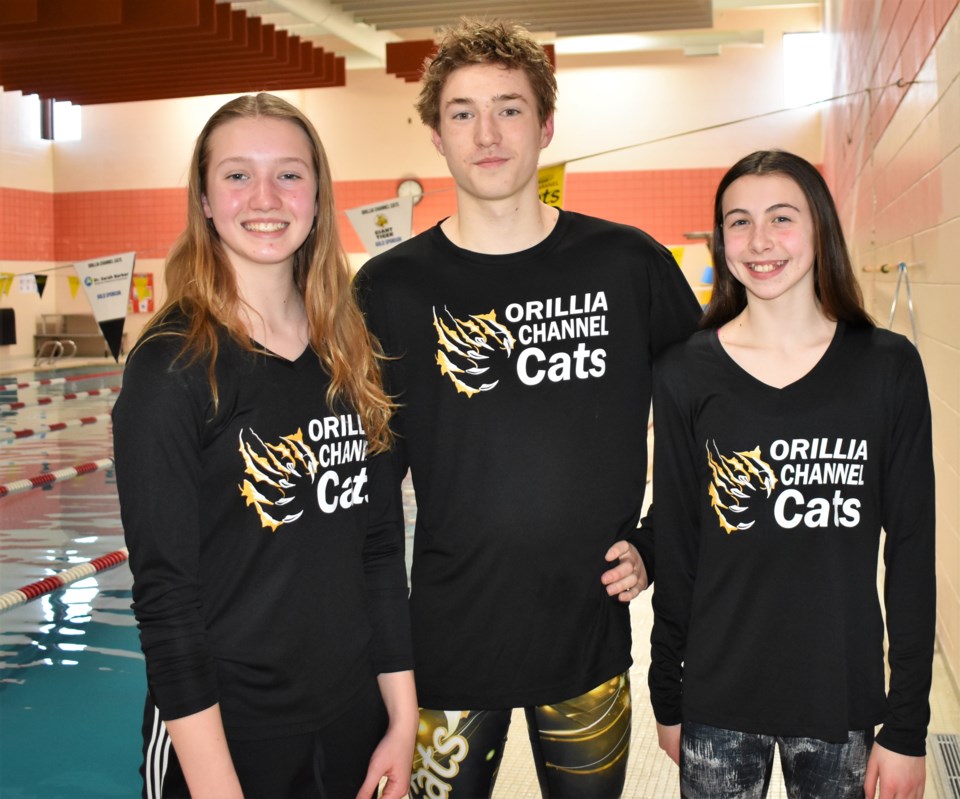 Three Orillia Channel Cat swimmers shone at recent provincial-level competitions and qualified to represent their club and their city at upcoming national championships. From left, are Blythe Wieclawek, Caleb Near and Hayley French. Dave Dawson/OrilliaMatters

A trio of Orillia Channel Cats are swimming their way on to the national stage.

Blythe Wieclawek, Hayley French and Caleb Near each shone at recent provincial meets to qualify for upcoming Canadian championships.

“It was my goal this year to have more than one swimmer qualify for these competitions, so I’m pretty happy for them,” said Cats head coach Meredith Thompson-Edwards. “Each of them has been working really hard and stepped up their training. They have learned to deal with the stress of competition.”

Wieclawek, 12, led the way for the Cats, shining at Ontario championships on back-to-back weekends earlier this month.

She placed eighth overall in the 50-metre freestyle (28.65) at the Long Course Age Group Provincial Championships in Etobicoke to qualify for the Canadian Eastern Swimming Championships being held in Windsor April 12-16.

The Grade 7 student at Forest Hill Public School (Midhurst) also excelled at the Long Course AA Provincial Championships. The hard-working athlete won a gold medal in the 50-metre freestyle, won a silver in the 100-metre backstroke and also made the finals in the 100 freestyle, 200 backstroke and 200 Individual Medley. Along the way, she shattered some long-standing records.

Thanks to that impressive performance, Wieclawek has qualified for the Canadian Junior Championships. At that national-level meet in Winnipeg in July, she will compete in the 50 freestyle.

“I’m just looking forward to the experience,” she said. “I’m not expecting to do anything big, but I hope to improve my time a bit and get closer to qualifying for senior nationals. I’ve never been to a national-level meet, so it will be a huge learning curve.”

Near, 15, swimming among the fastest 15-year-old boys in the province, struggled a bit in the preliminaries, but made the final in the 100-metre backstroke.

“I didn’t get the time I was hoping for in prelims,” he told OrilliaMatters. “So, I was really psyched in the finals and all that adrenalin kind of worked in my favour because I finished sixth.”

The stellar finish qualifies Near for the Canadian Swimming Championships being held in Montreal April 5-8.

“Basically, at my point in swimming, that’s the highest you can get,” said Near of the Montreal event that also serves as the Youth Olympics Trials. “I will be really excited to see all the other guys that are high up there.”

Near, a Grade 10 student at Orillia Secondary School, is trying to stay realistic about his goals. “For me, it’s more of a learning experience. I haven’t been to a meet this high before, so it’s learning about the atmosphere and that kind of stuff. A best time would be nice, but I don’t have any set expectations.”

French also earned a pair of medals at the AA Provincial championship, swimming to a silver in the 100 butterfly and a bronze in the 200 butterfly, in which she set a new club record with a time of 2:39.48.

“I didn’t really expect much at provincials,” admitted French, who conceded her times were not as good as she had hoped in the weeks prior to the event.

So, the Grade 7 student at Notre Dame Catholic School focused on getting faster. “I just kept training and worked my butt off,” she said with a smile. “I was surprised to win two medals.”

With her strong showing, French, who has been swimming competitively for seven years, has qualified to compete at the Canadian Eastern Championship in Windsor. “I’m really excited about it,” she said of that meet. “I’m just hoping to have a good race. I’m sure I’ll be a bit nervous because it’s a bigger meet. The competitors will be way faster at this level. I think it will push me.”

All three Cats say their coaches have been instrumental in their success. Wieclawek, for example, credits her coaches with helping her improve her stroke.

“(Thompson-Edwards) used to tease me and say I was brushing my hair when I swam backstroke,” she explained while mimicking her ‘old’ method. “She taught me to fix my stroke, learn how to keep breaking your comfort zone even though you think what you’re doing is right … she has also taught me to keep pushing to my limits and letting me know that if I reach that limit, there’s something past that.”

Near had a similar experience. He didn’t start swimming competitively until he was 10.

“When I started, my technique was horrible,” he said with a smile. He said he simply could not master under-water flip turns that are critical to a swimmer’s success.

“Because of that, my coaches would have me do somersaults around the entire pool deck until I could handle that motion,” he said. “They put in a lot of time to help me and they’ve always been there.”

While the coaches have been critical, success does not come without sacrifice and hard work. These youngsters are in the pool seven times a week – including before-school and after-school practices.

“We have to be on the deck by 5:50 for a 6 a.m. practice and I live in Oro,” Near said. “But I like it. It’s nice to be awake for school … Swimming is something I really enjoy and I excel at it and that motivates me to get better.”

Wieclawek agrees. She would not use the term ‘sacrifice.’

“It’s not taking anything from me, it’s giving me all these wonderful things,” she said. “I love the sport and all the opportunity and experiences it’s given me. I’ve made so many friends here … I love it.”

That doesn’t mean it’s easy. As a sprinter, Wieclawek’s best event is over in less than 28 seconds; it’s difficult to get faster in such a short event.

“There’s no room for a mistake. One awkward stroke or a slow start … in a 50-metre pool, there’s not even a turn,” she said. “You really have to be ready and just go as fast as you can.”

All three swimmers will be working hard on getting faster as they train for national-level competitions.

“It’s going to be great for them to go and see the fastest swimmers in all of Canada,” said Thompson-Edwards. “It will be a great learning experience.”

She said she hopes competing at this level motivates the hard-working athletes and also serves as inspiration for the rest of the club’s 145 swimmers.

Wins and titles are built by hard work, says passionate local coach
May 26, 2020 7:00 PM
Comments
We welcome your feedback and encourage you to share your thoughts. We ask that you be respectful of others and their points of view, refrain from personal attacks and stay on topic. To learn about our commenting policies and how we moderate, please read our Community Guidelines.