Coun. Jonathan Main thought residents on Norene Street could have voiced their concerns a bit loudly.
0
May 22, 2020 9:54 AM By: Mehreen Shahid 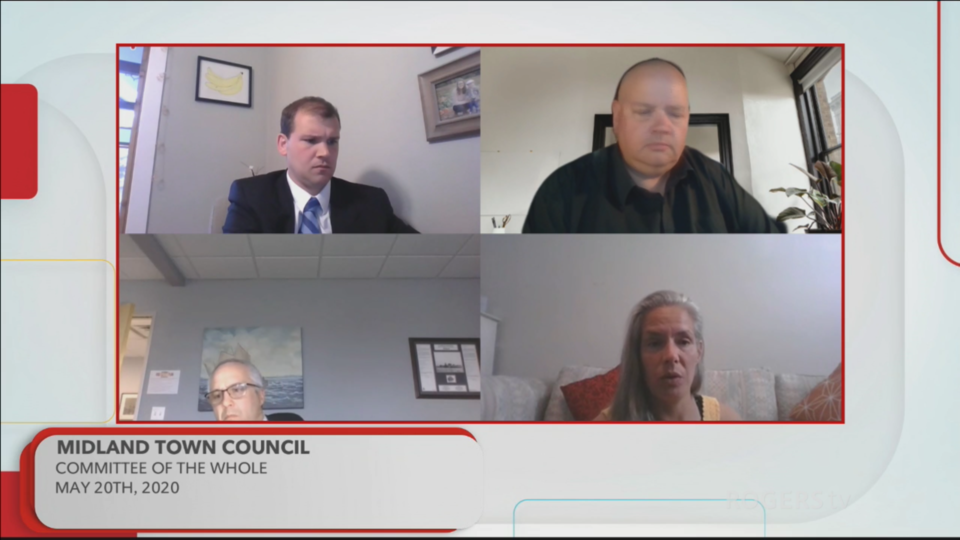 Coun. Jonathan Main, top left, had questions for staff around the design for the subdivision on 319 Gervais St. Mehreen Shahid/MidlandToday

And it's going to be a pain for at least one resident on Gervais Street, the location for which council has approved an 18-residential unit subdivision.

"I'm not impressed," said Maggie Plumb, who lives right next to the slotted subdivision land. "It will be so much more traffic on this area. And the way they're cramming all the houses in there."

She said she attended the town meeting held in January and didn't think council would approve it.

"I guess there's not much we can do," said Plumb when she found out council committee had voted Wednesday night to pass the plan.

"I'm not sure how it's going to impact my property value," she added. "I've had a nice private backyard for a long time and now it'll be gone. I think they're cramming too many houses in that area. If they didn't have as many (houses), I wouldn't mind it. Each house would have two cars and then they'd have visitors, that's too many."

Coun. Jonathan Main, however, was of the opposite opinion.

"Is this is a missed opportunity?" he said. "Are we wasting potemtial of this development site?"

The current proposal will see the units built following a cul de sac design. Out of the 18 units, being built eight are single detached dwellings, while the rest are semi-detached.

Main said he thought the design was unconventional and questioned whether this was the ideal configuration and layout for the property to suit density requirements for future developments in the town.

"What the Provincial Planning Statement (PPS) states and our new official plan (yet to be adopted) is pointing towards is that when you have one of these development opportunities, (you) try to add as many units as you can," he said. "It's good for the town and it's good for the tax base."

Main added he would have liked to see the development fulfill the 50 people and jobs per hectare density requirement by the PPS fulfilled with triplexes, quadplexes, and small apartment buildings.

In reponse to his question about this being the best design, town planner Angela Zhao said the design has been through several different versions to reach this stage.

"This is currently the best version that is agreeable between both staff and the developer," she said. "In terms of completely alternative designs, it is what the developer is proposing, we cannot impose additional density upon on them since it's not our policy. The current design does bring the density higher than what is currently permitted."

Then Main said he wished he had heard more from residents in the neighbourhood.

"The fact that we didn't hear much from neighbours on Norene (Street), we could have done a better job at getting the word out," he said. "I thought the residents of Norene would voice their concerns a little."

Two out of the three residents on Norene Street that could be reached told MidlandToday said they had no issues with the subdivision going up in their backyards.

"From where we are, we can't even see that area," said Doug Swales, who lives at the top of Norene Street. "The backyards are pretty well treed on this area. Actually, we wouldn't even know if it was there, unless we went out and looked down Gervais (Street) itself. It's not going to really bother us. It isn't going to make any difference to us whether the property is a housing development or not."

Swales' neighbour down the street, Paul Cormier said he had no problem with a subdivision going up in behind his house.

"My Mom and I moved up here when I was three in 1968, so I've seen a lot of changes," he said. "I used to hang out in that forest so it's be a shame to see it go. But they've thrown up everything else in that neighbourhood so why not that. It's not going to be noisy and parties, because it's just townhouses."

The committee of the whole decision was ratified at the regular council meeting the same night.

Local communities bracing for impact from high water levels
Jun 2, 2020 7:30 AM
Comments
We welcome your feedback and encourage you to share your thoughts. We ask that you be respectful of others and their points of view, refrain from personal attacks and stay on topic. To learn about our commenting policies and how we moderate, please read our Community Guidelines.