Council members threw all sorts of questions at staff in their attempts to find savings somewhere in the budget
Feb 23, 2021 1:08 PM By: Mehreen Shahid 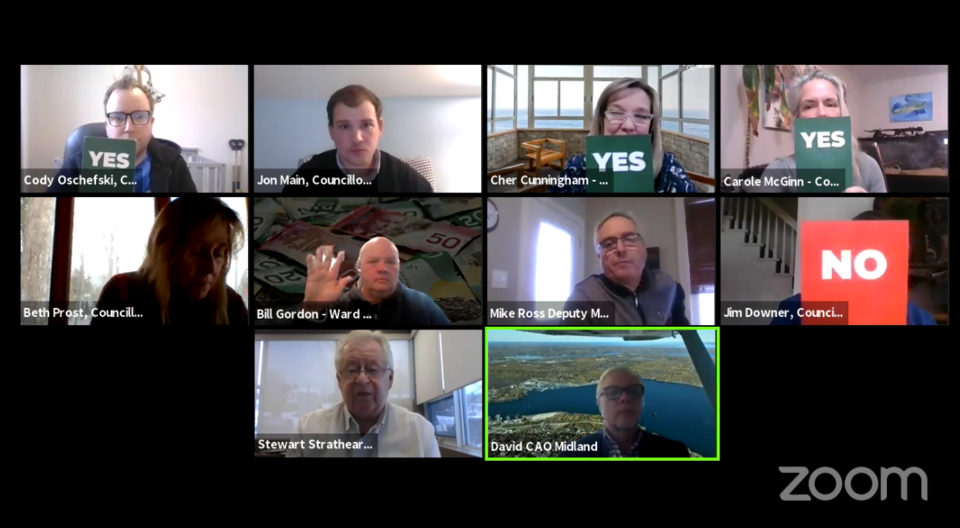 Council voted on a few of the items on the special budget meeting agenda, carrying over the remaining to Tuesday's meeting.Mehreen Shahid/MidlandToday

Midland council spent an entire day looking for savings in the first draft of its budget.

None have been found yet, however, there are still two more days of deliberations to go.

Monday's session kicked off with as council members went over the agenda items one by one.

There were some questions around increased costs in the water and wastewater operating budgets.

Coun. Bill Gordon asked about the 47% increase in consultant costs.

"We're working on two major projects with University of Toronto and McMaster University and we have some money to contribute to those projects," said Andy Campbell, executive director of environment and infrastructure. "That is the majority of that increase. We also have Mountainview well that we have some additional work to be done on. It isn't covered through the capital budget."

Gordon then asked about the 42% increase in wages and benefits.

"There are no new asks I see there from you guys, I think you're run pretty thin in that department," he said.

Campbell said there are no new staff being brought on, but there is some internal shuffling happening that is reflected in the budget.

Gordon also had questions around licencing, which has gone up by 193%.

"We've improved our security," said Chuck Fiddy, manager, water and wastewater services. "We continue to look at it how our system is vulnerable. The cost has increased to maintain that, as well as perform some modifications and changes, so we're better aware of what's going on in the system."

Coun. Jon Main was concerned about the reserves for the department.

Similar questions were asked around the wastewater operating budget.

"I guess all of these are being funded by reserves and don't have a direct impact on our budget," said Gordon. "I'm concerned we're vacuuming out $5.6 million from our reserves that arguably could be put off. But what do I know. That's my question to you, are there things in here that can be deferred?"

Campbell said staff had presented a pared back list.

"If you look at the 10-year plan, we go from a $8 million dollar budget this year to $31 million budget next year," he added. "Please remember, we aren't doing household repairs here. We fix our facilities to last longer. It is taxpayer money and we are very responsible in spending it. We are knowingly running some of our reserves short because we're trying to see how we can mitigate some of the tax levy impacts."

Campbell said this year's ask has already been brought down from $20 million.

"It didn't get rid of the expenses, it just pushed them to next year causing an increase for taxpayers," he said.

After the two operating budgets of $3.3 million and $8.8 million were approved for water and wastewater, respectively, council began deconstructing the capital projects list.

Coun. Carole McGinn asked if there was any way that capital projects could be covered by grants instead of reserves?

"There aren't a lot of grants out there, many times they have to be shovel ready," said Campbell. "We can't put a budget together and assume the grants may come through. Some of the projects we have to do regardless of whether we get a grant or not."

McGinn then asked about the vehicles listed for replacement in the capital budget.

Campbell said the replacements aren't because of use in the last year, but over the last several years.

"We deferred them in previous years to control the budget," he said. "At some point, you have to replace them, so it gets kicked to the next year."

Half way through the meeting, Gordon expressed his frustration at not being able to cut back on any projects.

"I'm really just looking for places we can save," he said. "I seem to be the only person on council who is questioning this and I feel like a bit of an island here, but should we be using reserves?"

Coun. Cody Oschefski took offence to that and said just because everyone wasn't questioning everything did not mean they didn't want to find savings.

After apologizing to his peer, Gordon then asked if there were any savings around the coal dock, which is being proposed to be as a stop for cruise ships starting next year.

"At best, cruise ships can't even sail in Canadian waters until 2022," he said. "And even when they come, if we don't have a parking lot for them, they can anchor out and we can save on that. Can we push the coal dock to next year when we can evaluate where we are?"

Campbell said it would be best to get the project done sooner than later.

"It's in the budget this year so that the work would be ready next year if those ships come in," he said. "There's always a challenge this time to get something constructed if we have a later winter. The larger ships could anchor out in the harbour and use tenders to bring their clients in. Given the fact that we have the seawall to tie up to, we try to provide a dock service and charge user fees and recover our costs through those user fees over time."

Another councillor wanted to dermine whether the Midland Bay Landing Development Corporation's $250,000 site improvement plan could be deferred until next year.

However, Michael Jermey, chief financial officer, responded: "The reserve for MBL didn't exist when the property was acquired.

"In the 2019 year end report, we recommended the reserve to track the money being spent on it. We funded the acquisition of land from that and are funding the reserve," Jermey said. "The reserve is the town's reserve.

"We bought land and are making improvements to it to sell it to get more money," he added. "For the time being, that reserve is in deficit and will continue to be in deficit, until we sell the property."

Mayor Stewart Strathearn said he could understand Gordon's attempts at looking for savings.

"We tasked staff with bringing a 2.5% blended budget; they're not quite there yet," Strathearn added. "There are areas we may be able to make some changes. We do need to be listening to our residents, but we also need to look at the best approach being recommended by our staff."

David Denault, chief administrative officer, said the public feedback through the town's survey showed that a good percentage of Midland residents that responded were in favour of an increase.

"I'm not sure everyone thinks zero per cent is a good idea," he said. "I've certainly indicated what the consequences are. Is there a reasonable amount we can put forward and still have progress, I think that's the budget recommendation is."

Budget deliberations are continuing today and can be viewed live via the town's YouTube channel.

After-school virtual programs to be offered to students with ASD
Mar 6, 2021 1:26 PM
Comments