'It will allow people, who are rural and disadvantaged from an infrastructure perspective, to be able to ... get high-speed internet to their residences,' says official
Jul 6, 2020 3:15 PM By: Mehreen Shahid 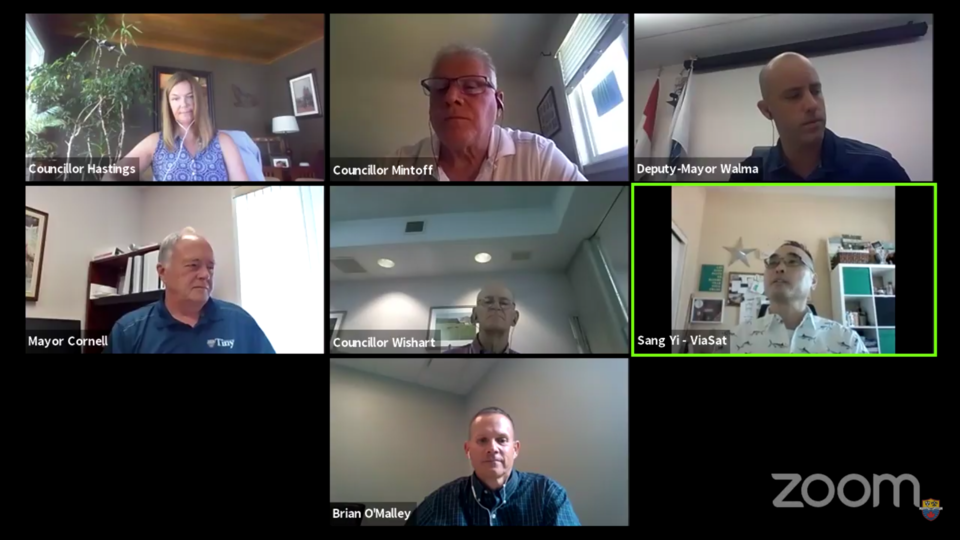 Sang Yi, a Viasat employee, pictured in the right corner, presented the company's progress on an antenna facility project on Concession 15. Mehreen Shahid/MidlandToday

Tiny Township council moved to add more high-speed internet possibilities for its residents after it approved a satellite antenna facility in the township.

Council committee heard from Sang Yi, a Viasat employee, who updated them about the results of the mandatory procedures they had followed to reach the stage of approval.

Yi said the project team met with township staff in February and had planned for an in-person public consultation session for March 19. Due to the pandemic, that meeting was cancelled, he said, and a virtual open house was organized for June 18.

Yi said project representatives hosted the virtual open house as planned, however, no public participants attended the meeting. Neither were any comments or objections mailed, emailed, or called in.

The satellite antenna is proposed for Concession Road 15 East and is designed to command and control the latest Viasat satellite (VS3), he said. The maximum height of the structure is proposed to be 11 metres.

Coun. Cindy Hastings said she could not see a problem with endorsing the project but she did have a question for Yi.

"What does it mean for residents and businesses in our area?" she asked. "What type of service can they expect if they choose to take advantage of it?"

Yi said it meant better internet facilities for them.

"This new satellite is designed to provide one terabit of network capacity, which is a phenomenal amount of data," he said. "It will cover all of North and South America. It will allow people, who are rural and disadvantaged from an infrastructure perspective, to be able to reap our services and to get high-speed internet to their residences. It is an ability for us to augment satellite-based internet services to a variety of customers."

"Our policy has been followed, staff have reviewed the project," he said. "Staff have worked on reducing visual impact on road allowance and adjacent properties. We are recommending that council prepare a letter that they proceed."

Council, following staff's recommendation, was expected to pass the motion at the council meeting held later in the day.

Wendat Community Programs and Huronia Community Foundation partner on endowment fund
Aug 5, 2020 3:24 PM
Comments
We welcome your feedback and encourage you to share your thoughts. We ask that you be respectful of others and their points of view, refrain from personal attacks and stay on topic. To learn about our commenting policies and how we moderate, please read our Community Guidelines.