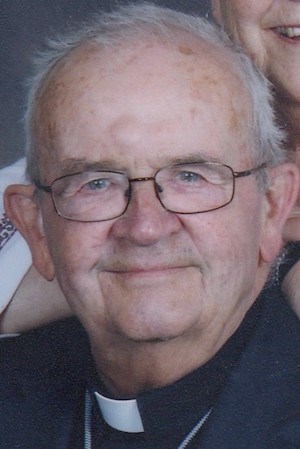 Passed away at the Royal Victoria Regional Health Centre, Barrie on Saturday February 17, 2018, surrounded by his family at the age of 82, of Barrie and formerly of Sandy Cove Acres and Beaverton. Beloved husband of Christine. Loved father of Caroline Pence (Jim) of Alabama, Ron Ross (late Jackie) of Alabama, and Connie Wren (Murray) of Etobicoke. Will be missed by his many grandchildren, great grandchildren, nieces and nephews. Dear brother of Linda Rand of Etters, Pennsylvania and brother-in-law of Barry & Julie Smith of Holland Landing. Karl was a retired Presbyterian Church Minister and Padre with the RCAF 441 (Huronia) Wing, Barrie. The family will honour his life with a visitation at Stroud Presbyterian Church, 2180 Victoria Street, Innisfil on Saturday March 3rd from 1pm until time of service at 2pm. Cremation to follow. As an expression of sympathy donations in memory of Karl may be made to Stroud Presbyterian Church, and may be made through the COLDWATER FUNERAL HOME, Coldwater (705-686-3344).