Outdoors columnist explains how snakes survive winter and how they take hibernation and survival to a whole different level
Oct 4, 2020 11:30 AM By: David Hawke 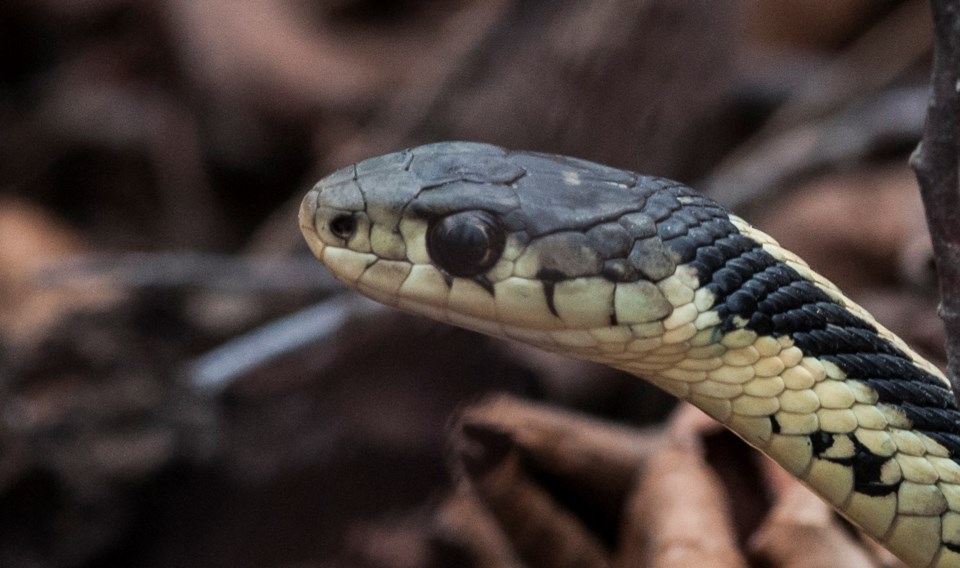 It's that time of year for garter snakes; time to get ready for their version of hibernation, known as brumation. David Hawke/OrilliaMatters

Looking back on last week's weather only confirms the suspicion that autumn is trying to descend upon us. As for you and I, this rocketing and plummeting of the thermometer is just an annoyance (although a big annoyance, for sure), but for the wildlife of the region it must be an all-out frustration.

Migration energy is wasted as storm fronts bring the critters right back to where they had left just a couple days earlier; hibernation plans are on hold until the cold weather truly settles in. So glad all I have to do is either adjust the A/C or put on a jacket.

A few days ago the morning temperature on our farm was a nippy plus four; by noon hour it was a balmy plus-12. Since it had warmed up enough for a short hike, I somehow convinced young Toby that he should, maybe, for a while anyway, set aside his Minecraft and Lego and we could go for a wander along the forest path.

Walking sticks were pulled from the handy barrel beside the door and away we went.

There were lots of tiny fungi to discover along the way. The orange-coloured eye-lash cups were scattered along just about every log encountered, and turkey-tail fungus displayed in obvious profusion.

The brown velvety autumn shelf fungus had grown recently on the fallen basswood tree; we found 30 different fungi within a half hour, and even if we didn't know all their names they were definitely different one from another.

One of Toby's short charges along the trail suddenly came to an abrupt halt. "Whoa Grandpa! I almost stepped on his head!"

With an exclamation like that you never know if the near-victim is a centipede, a sow bug, a dead mouse, or a baby rabbit. Best that I pick up the pace and investigate for myself.

Laying beside the trail, in superb camouflage, was a good-sized garter snake. Toby stared at the snake. The snake stared at Toby. Toby blinked so the snake won the contest, but only because it can't blink.

With that out of the way, we knelt down for a closer look. The snake didn't move a millimeter, other than flicking its red tongue out and in at irregular intervals.

There were several grains of sand on its head, and the back half of the critter was covered in damp soil, indicating that it had been underground recently. Considering the time of year, it was probably getting ready for brumation.

"Brumation" is snake-talk for hibernation. All of our local snake species hide out for the winter but they don't do so in the same manner as a warm-blooded mammal.

During brumation the snake is awake, alert, and never really goes into the legendary deep sleep of a hibernating animal. Yes, the heart rate slows by almost 80% and its oxygen intake drops by 50%, but that's where the similarity to mammal hibernation stops.

Mammals burn energy all winter long, even when hibernating, and if they ate enough good food in late summer and fall their fat reserves should sustain them through to next spring. However, snakes do things a bit differently.

Starting several weeks prior to their winter-time slow down, snakes stop eating. This is done for a couple of reasons, one being that it is ectothermic (cold-blooded) and can adjust itself to very cool air without the need for burning fat reserves.

The second reason is that digestion stops during brumation, so any food remaining in the digestion system may rot and kill the snake. So while the mammals are chowing down on any and all available autumn foods, snakes are skipping both dessert and the main course.

Hiding from the cold can be a challenge, as the snakes have to get below the frost line in the ground, which means finding a hole or crevice that goes down, down, down. If such holes are hard to find, several snakes may share the same hiding-hole.

The air temperature of the winter abode should be between plus three and plus 12 Celsius, as colder means freezing and warmer means waking up and getting hungry.

After a good long look, Toby and I went on our way, leaving Mr. Snake to regain his composure (not that he lost it in the first place), hoping that it can find adequate winter refuge before the next cold front swings through the region.

Also, it has to avoid hungry predators, like raccoons and wild turkeys, that are putting on their own fat reserves.

And to think my biggest worry today was whether to wear a heavy or medium weight sweater.