It's waterfowl season. Keep your eyes on the skies!

Waterfowl are easy to observe and identify, and many species have a unique history in regards to their presence in southern Ontario, says outdoors columnist
Oct 18, 2020 11:30 AM By: David Hawke 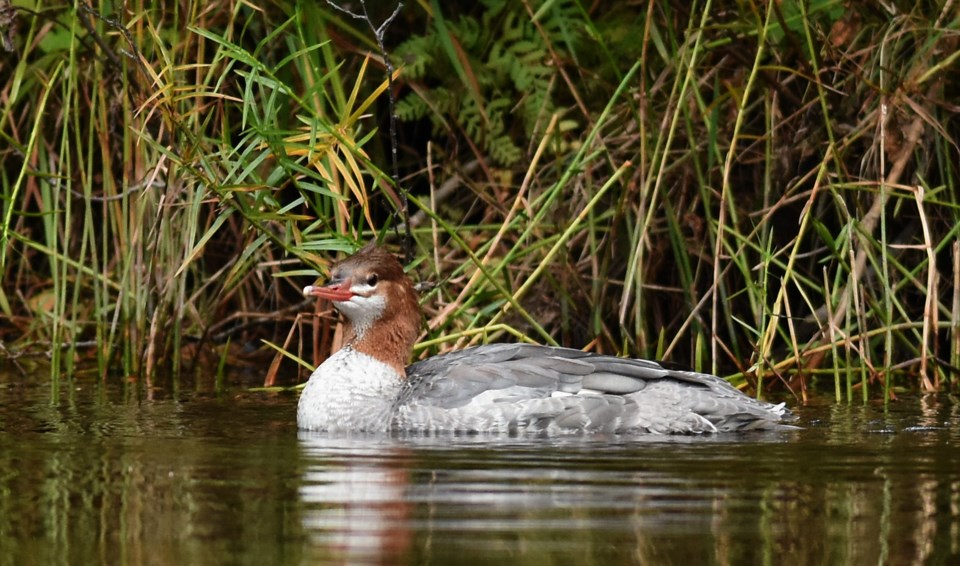 A female Common Merganser searches for minnows to eat as she migrates south through our area and onwards along the Mississippi River flyway. David Hawke/OrilliaMatters

Birdwatching is definitely a spring thing, as the birds are in their colourful breeding plumage and tend to be quite visible as they proclaim nesting territories; summer is "OK" for birding although the feathered gents have calmed down and are too busy gathering caterpillars to really show themselves.

In winter time the local feeding stations become a gathering place for those species that stay here; however, autumn is an on-again off-again affair.

As the young warblers and sparrows trickled through on their southwards migration, birdwatching became a rather close-focused affair as "they all look the same": adult birds are in their winter plumage, which looks an awful lot like the same plumage as the young'uns.

Tends to be frustrating, with the checklist at the end of the day's outing showing a lot of LBBs (Little Brown Birds) and UFBs (Unidentified Flying Bird).

However, the species in flight right now are large, nicely coloured and fairly easy to see. I speak of the waterfowl, the ducks, geese, swans and mergansers that are dabbling and diving their way southwards, one beaver pond or small lake at a time.

Waterfowl are easy to observe and identify, and many species have a unique history in regards to their presence in southern Ontario. No doubt you are well familiar with the Canada goose, either admiring their dramatic "V" formation as they wing across the sky, or perhaps cursing their thick layer of 'goose poop' in the park.

But nowadays I would urge you to pause and take a closer look at that flock of black-and-white icons feeding out in the field; they may actually be rather special visitors.

Canada geese come in different races or sub-species, with names like giant, lesser and cackling; with the somewhat recent advent of DNA cataloging, even more separations have occurred.

If the geese you happen to be looking at have necks a bit shorter than the normal-looking goose, and a body that appears to be compact-sized, you may well be looking at a flock that has fly down from the Hudson's Bay or James Bay breeding grounds. Not too many of these guys left, so take the time for a closer look.

Speaking of geese, that large and lumbering specimen we have become so familiar with is actually only a recent addition to southern Ontario's flight paths.

The giant Canada goose is actually a western race, but thanks to mankind’s meddling, or I mean careful wildlife management strategies, they are now the ubiquitous goose of our parks and ponds.

In 1967 a few pairs were brought here and penned at Wye Marsh (Midland) and Tiny Marsh (Elmvale) to raise goslings that could be set free. The program seems to have worked.

Even the uber-common mallard duck has a story. This is another western species that has, of its own accord, extended its range eastwards to include southern Ontario.

Back in the 1930s a duck hunter could get a good number of black ducks (if he knew how to hunt efficiently) and if a mallard showed up, well somebody better call the newspaper! Black ducks were the reigning species of the day.

But that population dynamic has now swung entirely the other way, with black ducks now being rare and mallards being, well, plentiful and underfoot. One would have to travel to northern Quebec to see decent sized wild populations of black ducks.

Other shifts are occurring within waterfowl populations: wood ducks, once facing extinction in the 1930s are now the most common duck found in our local swamps, thanks in large part to a massive effort of installing nesting boxes across the north-east part of the continent.

On the negative side, the blue-winged teal, once a common breeder of local wetlands, has all but disappeared.

All these birds tend to migrate along well-documented flight paths, called flyways.

Here in southern Ontario there is a bit of a crossroads, as the birds may choose to either follow the shore of the St. Lawrence River somewhat north-eastwards to the Atlantic Ocean and then swing south, or they head immediately south to Point Pelee and strike out for the Mississippi River.

Whether it be a pine warbler or a blue-winged teal, each species has its own map and sticks to it.

Interestingly, these flyways can be part of a much larger travel route. In the spring the local ponds and flooded fields are resting areas for pintail ducks as they fly towards their breeding grounds in central Canada.

But in autumn, only rarely is a pintail found going southwards through Simcoe County, as they usually go together in big flocks down the central flyway in the mid-west States. They therefore have a somewhat circular flight path over the continent.

Whether walking your dog along the waterfront (on a leash, of course) or wading through the cattails of a local marsh, take that extra moment to really look at those ducks bobbing in the water... they may be more than just another gang of mallards.

Changing seasons create challenges for snakes, other critters
Oct 4, 2020 11:30 AM