As you enjoy early fall colours, keep a sharp eye for evidence of deer and moose using the trees for back rubs, says outdoors columnist
Sep 13, 2020 11:45 AM By: David Hawke 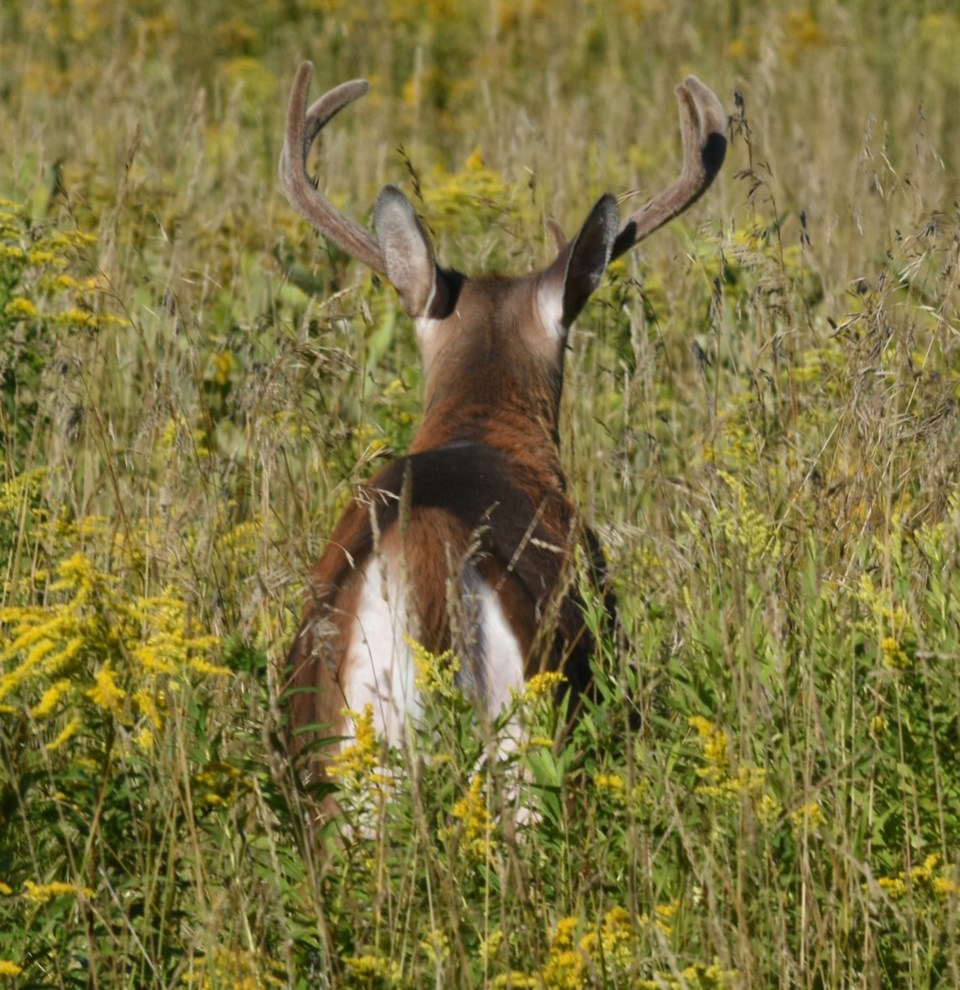 This buck, shown in an area meadow, is apt to look for a tree to scratch its newly grown antlers. David Hawke/OrilliaMatters

White-tailed deer have always lived around our farm, occasionally seen grazing in far corners of the pastures or bouncing across a meadow as they move from one woodlot to another. Nice to see, and nice to know that they are comfortable enough with our presence to continue living here.

However, events are building that may cause some friction between us.

The first sign of trouble was noted a few weeks ago. While inspecting our tree farm we found one of the young red oak trees had been broken off. These trees, planted in nice straight rows of several hundred each, have taken well, creating solid root growth and now putting their energies into top growth, resulting in a small tree of about three metres in height.

And here was found a mangled individual, its side branches having been stripped off and then the main stem snapped off about knee-height. What the heck was going on here?

A closer look revealed that the bark had been torn in vertical strips on each side of the stem. Hmm, methinks a deer tis to blame; Buck be his name.

Starting in September and continuing through October the deer population goes about the business of recreating itself. To woo and impress the does, the bucks have to turn all macho… necks become strengthened and engorged with blood, heads are held high, a distinct “I’m better than you” attitude surfaces, and strong antlers gleam in the first rays of the rising sun. Woo hoo, you the man, er, buck!

Trouble is, those fancy gleaming antlers need some prep work to get to their shining best. Starting way back in early springtime, the boys of the herd began growing funny little fuzzy bumps on their heads.

These knobs continued to grow, getting longer and branching into several points, still encased in a smooth velvet coating. As these structures are somewhat tender the bucks keep a low profile over the summer, ensuring the antlers don’t get knocked or bonked.

With the arrival of autumn, antler growth has ceased and the thin skin that has nurtured and encased the bone-like material has died.

Like an itchy scab, the deer begin to scrape this crusty coating from the antlers and reveal the off-white antler as a showpiece of their maturity. And that’s where our red oak came into play.

Perhaps it began innocently enough, with an antler brushing against the young tree as the deer browsed on grasses. Another brush because it felt good, and then another as a piece of the old velvet was scrapped off.

This was followed by a series of more vigorous rubs against the sapling, the bark being peeled off as the new antler rubbed up and down. The side branches sheared away as the deer continued with enthusiasm to rid itself of the dead skin clinging to the antlers. Front legs splayed, neck muscles tensed, antlers flashing, the deer now adds a few twists to the motion and suddenly the oak tree snaps, its stem pried in two by the thrashing force of the antlers.

Whenever you see a tree with vertical scars it is almost certainly a ‘buck rub’, a place where a deer (or a moose) has prepared itself for the coming mating season.

If the rub is at knee to waist height you have a deer rub, if at waist to head height you are looking at a moose rub, a discovery becoming more commonly found in north Simcoe County.

Yesterday I took a walk around our farm to see what’s happening in the great outdoors and found the sumac grove looking like the Township had driven by with their grader-mounted tree-whacker. The sumacs had been vandalized by one or more bucks intent on antler polishing.

So far the damage is not to be unduly worried about, as this event has happened naturally for hundreds of years in these here parts. The affected tree usually survives albeit with a scar or two; even the broken red oak will probably send up new shoots of growth from the root next spring.

But my next discovery on this morning walk has caused me to wonder what’s going on out here in the pre-dawn hours.

A few years ago we installed a new fence along the streamside as a way to keep the cattle from trampling the banks and causing erosion and silt loading within the creek; a large metal gate was built into the fence to allow a tractor access to the back field if necessary.

However, this gate has never been used other than being cracked open enough to allow us to walk through it, a small chain used to keep it closed.

On this day the gate was gone. Oh, it wasn’t far away, found laying on the ground and still tethered by the latch chain, but off its hinges and dragged 90 degrees from where it should have been hanging. Very odd. No sign of human thievery (as is unfortunately the case in some missing farm gates), no vehicle tracks, just a bit of trampled grass.

My only solution to the puzzle is that a deer did it.

The following is speculation, but I assume Bucky accidently hooked an antler within the gate while eating nearby grass. As the hinges had not been secured properly (my fault, got busy with other things at the time) the gate was lifted up and off the hinge posts.

Still tangled, the deer pulled away and the gate came with it! A twist, a bunt and a jump and somehow the antlers came free and the gate flopped over. I wonder if the deer has stopped running yet?

As you enjoy the early fall colours keep a sharp eye for buck rubs, a natural event in our woodlots. And maybe you will catch sight of a buck displaying his masculinity, antlers polished and gleaming, surrounded no doubt by a bevy of suitably impressed lady deer.

Ghostly shapes shrouding trees are bubbles for tiger moths
Aug 30, 2020 11:15 AM
Comments
We welcome your feedback and encourage you to share your thoughts. We ask that you be respectful of others and their points of view, refrain from personal attacks and stay on topic. To learn about our commenting policies and how we moderate, please read our Community Guidelines.