Something to chew on: What's the difference between rabbits and hares?

When it comes to telling these Lagomorphs apart, it's mainly in the teeth, outdoors columnist explains
Dec 20, 2020 11:30 AM By: David Hawke 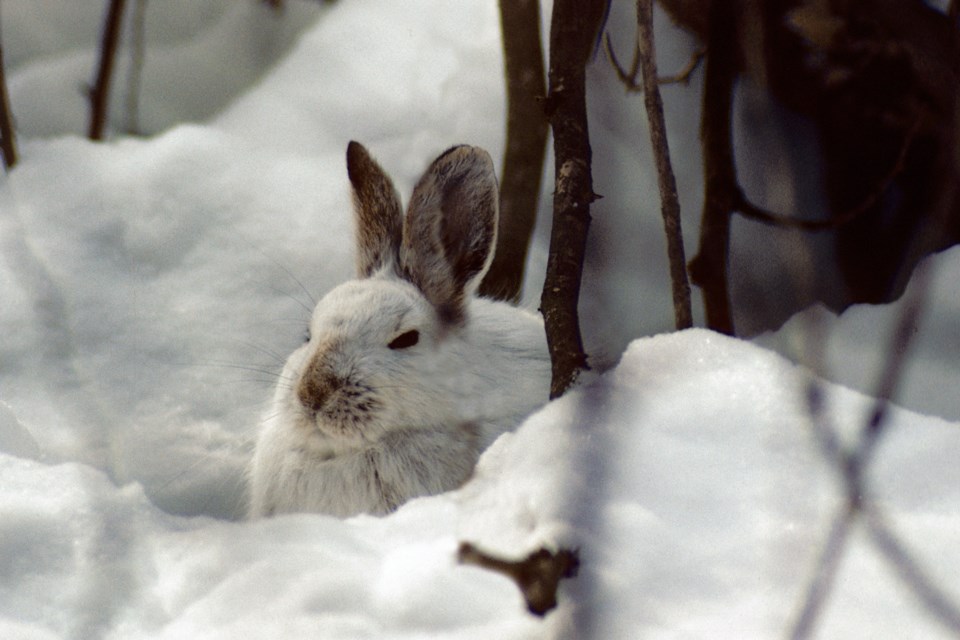 One of the things I’ve noticed about converting our former pasture field into a forest has been the shift in wildlife species using the area. With the cover of thick pine needles and provision of walnuts and acorns, the fields that were once almost barren of life in the winter now have quite a mixed population living here year-round within the young trees.

Where once there were rodents (groundhogs, meadow voles) hidden in the summer grasses, there now lives a couple of species of Lagomorphs. Yeah, I know, cool it with the fancy names. However, to really understand the nuances of our natural neighbours, Lagomorphs should be explained.

Most gnawing critters are within the scientific order of Rodentia, those mammals with the big pairs of front teeth. Well adapted for stripping the succulent bark from trunks and branches, these guys are happy munching away on a variety of vegetation. (Except when they eat the bark of your planted shrubbery. Then they are “a-gnawing.” I’ll let that sink in.)

Then there are the other gnawing animals called Lagomorphs, perhaps better known as rabbits and hares. So, what’s the difference? It’s mainly about their dental arrangement. Rodents have two upper and two lower front teeth that are set up in such a way that when closing, they act like wood chisels and scrape off the tender bark. Lagomorphs have four upper teeth and two lower front teeth.

Next time you have the opportunity to look inside a rabbit’s mouth, notice that the upper front teeth are actually two pairs, one behind the other. Not a rodent, confirmed now as a Lagomorph. Ta-da. Now you know.

While on the topic of teeth, rodents’ front teeth are very deeply rooted, grow continuously and must be worn down by rubbing and sharpening, accomplished by taking breaks and grinding their jaw sideways for a minute or so. Sounds like they are humming. Lagomorph teeth are constant in size and shallow rooted, so they can only nibble grasses and wildflowers.

Snowshoe hares and cottontail rabbits are the two that you are likely to encounter in north Simcoe County. They are native species (arriving here of their own accord after the glacier melted), whereas the European hare was accidentally introduced in 1912 when a few escaped from captivity near Brantford. ‘Jackrabbits’ prospered well for a few decades in the farmlands north of Toronto, hitting a peak in the 1950s. Few, if any, remain today. (‘Jack’ is an ancient rural term meaning ‘big,’ as in that big guy over there is jacked up.)

Despite the snowshoe hare and the cottontail rabbit being cousins, they do have their differences. The hare’s fur appears to turn white in winter while the cottontail’s fur remains brown. What’s up with that? Being a slightly more northern inhabitant, the hares have evolved to survive from their many predators by blending in with the snowy background. When they grow their thick winter layer of fur, it is white. When they shed that layer next spring, the brown under-fur shows and it looks like they changed colour.

Cottontails are more a critter of the southlands, so blending in with snow wasn’t a high priority with their ancestors. They just learned to be very, very quiet and hide in the shade of overhanging shrubbery.

Another difference is that rabbits will burrow, while hares do not. Cottontails will use a groundhog burrow for a summer den to raise their young, while the hares simply make a depression in the ground cover and have their babies right there. In the winter, a hare will sit in the open (mind you, very still), while cottontails will burrow a bit into the snow or dive deep into brush piles.

And lastly, yet another difference between rabbits and hares is that baby rabbits are born blind and quite helpless (hence the protection of the burrow), whereas hare babies are born fully furred and ready to go within a day or two. If it wasn’t for their shared trait of having six front teeth, I don’t know how they’d divide up the family tree.

A shared trait of Lagomorphs is that they have fur on the soles of their feet. Winter fur grows longer and thicker, so acts like little snowshoes to keep them aloft in the fluffy white stuff. Hey, snowshoe feet, snowshoe hare — it all makes sense.

An ancient Huron word for snowshoe hare is “waub” (or waabooz) and our local village of Waubaushene translates as “place of the rabbits.” So, now you know that, too.

Whether in town or out in the country, you have a good chance of seeing the tracks of cottontail rabbits. However, snowshoe hare love a good conifer swamp, so you may have to go deeper to find one of these guys. Whichever you seek, have some fun as you get your daily winter exercise. You might want to use these things called snowshoes, which are modelled after — oh, OK, time to wrap it up. Happy holiday wishes to everyone!