Now is the time to get outside to see if you can catch the end of the party before the colour is lost for another year, says outdoors columnist
Nov 1, 2020 11:30 AM By: David Hawke 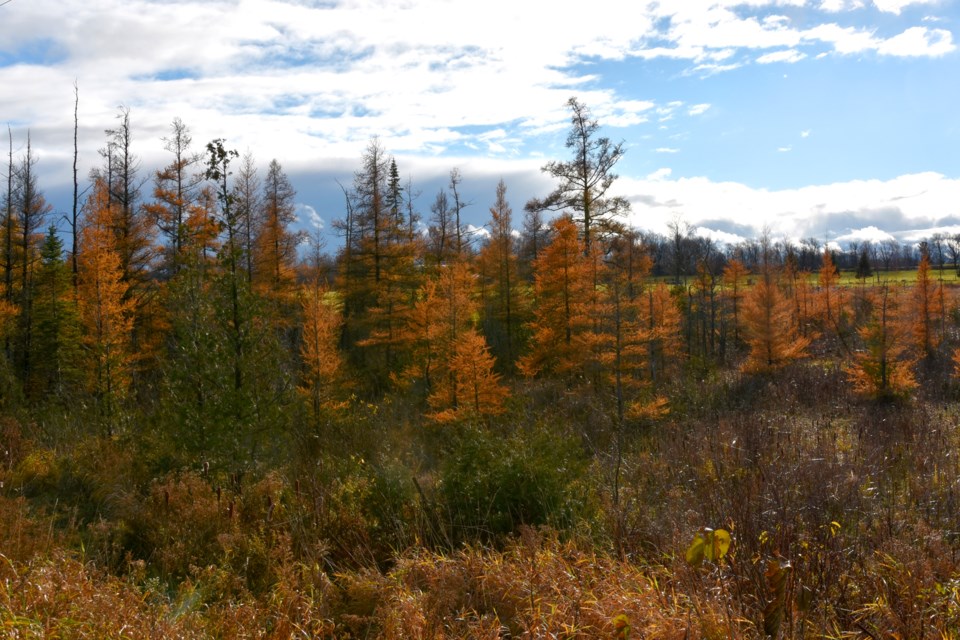 Tamarack, unlike its cone-bearing cousins, it is not evergreen. As with the more popular hardwoods, when autumn arrives the leaves (or in this case needles) are closed down for the season. David Hawke/OrilliaMatters

But now that the big hurrah of autumn has passed (or at least fallen), what now? Nature has a way of providing encores, giving us a wee taste of something else. Drum roll to introduce the tamarack trees!

Tamarack, also known as larch in some circles, is that odd-ball of the conifer tree world, in that unlike its cone-bearing cousins it is not evergreen. As with the more popular hardwoods, when autumn arrives the leaves (or in this case needles) are closed down for the season.

Without chlorophyll to keep things green coloured, the base colour of yellow becomes visible. And, wow, does it shine through!

A drive down any country road at this time of year, especially if the road dips down to a wetland swamp, will easily reveal these trees that shyly grew in a forest of green over the summer. Now they stand out and rock it with their bold statements of gold and amber!

There seems to be lots of information available as to "how" these needles are shed, but little insight as to "why". Best background story I found was based on a purportedly Native legend that tells of a group of trees that were quite vain, always looking at their reflections on the surface of the nearby waters.

One fall migration the cold came early and a flock of birds asked the tamaracks if they could take shelter within the boughs of the clustered trees. But permission was denied, as the tamaracks didn't want the birds pooping on their beautiful branches.

The birds moved on, hopefully finding a way to complete their journey.

But the Creator had noticed the tamarack’s cruel behaviour and as punishment decreed that all their beautiful needles would fall off every winter, leaving them to stand naked in the cold of winter. The bright show of colour at the end of autumn was allowed to mark the end of the season.

All of which makes sense to me except for the part about the birds asking to take shelter within the tamarack's branches... you'd think any fool bird would prefer the better cover provided by cedar or spruce! Anyway, that's what I read.

For the last few thousand years tamarack has repopulated our area in the post-glacier era, and has been utilized by humans for a wide range of uses. Medicine for healing bruises and intestinal disorders has been obtained from the bark and sap, and the wood itself makes for creating dandy snowshoe frames.

Indeed, the original word for tamarack was hackmatack, which was derived from akemantak which in translation means 'wood for snowshoes'.

The early colonists (I have to say 'colonists' now, as 'settlers' is politically incorrect) used lumber from tamarack whenever water damage was an issue.

The slow growth of the tree means the cells are small and tight-packed, which means that water has difficulty soaking in which means that a tamarack log laying in the water will lay there a very long time before rot can set in. The early Toronto subway support beams and ties were hewn from tamarack.

Within the bark of these conifer trees is an abundance of a chemical called tannin. If tannin is added to water and piece of fresh cow hide is plunked in, the hide will be preserved; thus tannin is used in tanneries when hides were tanned and turned into leather.

Many local settlers, er colonists, supplemented their winter income by cutting down tamarack and sending the striped bark by the railcar load to Huntsville for use in the leather-making industry.

Landscapers have been known to recommend tamarack as an interesting addition to your yard's look. Just be sure that you have a fairly damp place in your yard as these trees like to keep their roots wet.

If you can, get outside for a couple of hours and take a wander or a drive and see if you can catch the end of the party before the colour is lost for another year.