They are not pretty and can't sing, but turkey vultures have key role

These 'roadside cleaners' have remarkable sense of smell and acute eyesight allowing them to find fresh roadkill, says outdoors columnist
Apr 25, 2021 11:30 AM By: David Hawke 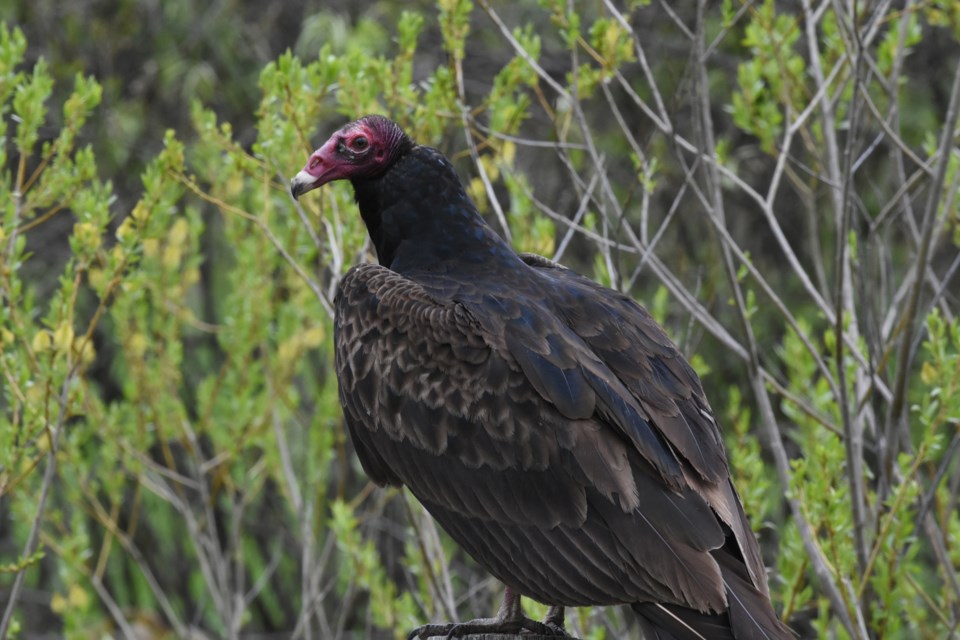 Turkey vultures have returned to the region. They re-appear mid-April as regular as clockwork.David Hawke/OrilliaMatters

The word 'catharsis' means to clean or purify, a word brought forward from the ancient Greek language.

This word is the root that defines an unusual group of birds, one of which we see here fairly regularly. High in the sky is Cathartes aura, perhaps better known as turkey vulture, the roadside cleaner, the remover of messy road-killed animals.

The second part of their scientific name, aura, means air or breeze, something that these birds appear to have mastered. Riding even the gentlest of air thermals, vultures can travel for great distance and time without the flap of a wing.

In contrast to this 'poetry in motion' is a vulture's appearance. The dusty-brown and black wings and body plumage is a stark contrast to its bright red and naked head. Their bright white beak is another easily seen field marking.

Their feeding habits are what garnered them their 'cleansing' moniker. As scavengers, vultures take full advantage of any dead critters or carrion they happen upon, and a carcass is soon picked cleaned.

One of the theories as to why vultures have no feathers upon their heads, is that the feathers would hold bits of goo from the carcass and result in becoming a home for tiny parasites.

With no feathers to worry about, a vulture needs only give its head a wipe in the grass and it's clean again! (So why do wild turkeys also have bald heads? Um..., I don't know.)

For many years the return of the turkey vultures each spring meant the end of winter. However, this old folk sign was originated in the New England States where spring tends to come a week or so earlier than here in central Ontario.

Also, these birds were rare in Ontario up until the 1950s; it was in the 1960s that  they moved their summer range northwards into Simcoe County, increasing their population slowly and steadily until today they seem a common part of the landscape.

But even if they are 'new' to the area, they are reliable. Mid-April is the usual arrival time of these huge birds, and records show that they drift in on warm spring fronts almost to the day, year after year. Even this year, despite its unseasonably cold temperatures, saw turkey vultures drifting through the skyscape right on time.

There are two species of vultures that you could encounter in Ontario, one very common, the other quite rare. Turkey vultures are getting to be as common as, well, turkeys. However, black vultures are a much more southern species, although they occasionally do a fly-by over the extreme southern points of our province.

As mentioned, these birds are scavengers, seeking whatever delectable dead things they can sink their beaks into. A vulture has a remarkable sense of smell, as well as acute eyesight. Preferring fresh dead animals to long dead animals, they patrol the roadsides and woodlands from high above, quickly locating menu items.

Perhaps one advantage of our extended roadwork and smoother, faster surfaces to travel upon is the increased number of road-kill animals. Vultures love this and say "thank you".

Have you ever heard a turkey vulture sing? Good, because they can't. (If you think you've heard one singing, well, maybe it's time to get some counselling for your 'little problem'.)

Vultures have a wicked, serpent-like hiss and a guttural croak from time to time. (Come to think of it, I've never really heard a serpent hiss, other than in the second Harry Potter movie).

In all my roving around in the great outdoors, I've come across only a few vulture nests. Nesting on the ground, between woodpiles or in a small cave cracked within a granite rock, seems to be home for these birds.

Not only do the young birds hiss quite excitedly should you come near, they also vomit with great enthusiasm. By spewing forth the semi-digested, pre-rotted yummies that their parents had already regurgitated for them, gives a whole new meaning to the word 'gross'.

Okay, so they need to work on their social skills. But get 'em in the air and prepare to be dazzled. With a wingspan of almost two metres and a wispy thin body, the weight to lift ratio is such that a puff of wind can keep them aloft for hours with no exertion of energy. They are much like a living kite, no strings attached.

Despite the lingering snow the vultures have been back in town for about three weeks now, and the adults have already picked out their potential nesting sites.

By morel-picking season the eggs will have been laid, and over the upcoming summer months these vulture families will be busy cleansing our countryside. Quite cathartic, indeed.