Most boating offences on weekend were impaired charges: OPP

One Toronto man faces four charges including impaired, not having enough lifejackets on board and insufficient safety equipment
Jun 24, 2019 3:00 PM By: OrilliaMatters Staff 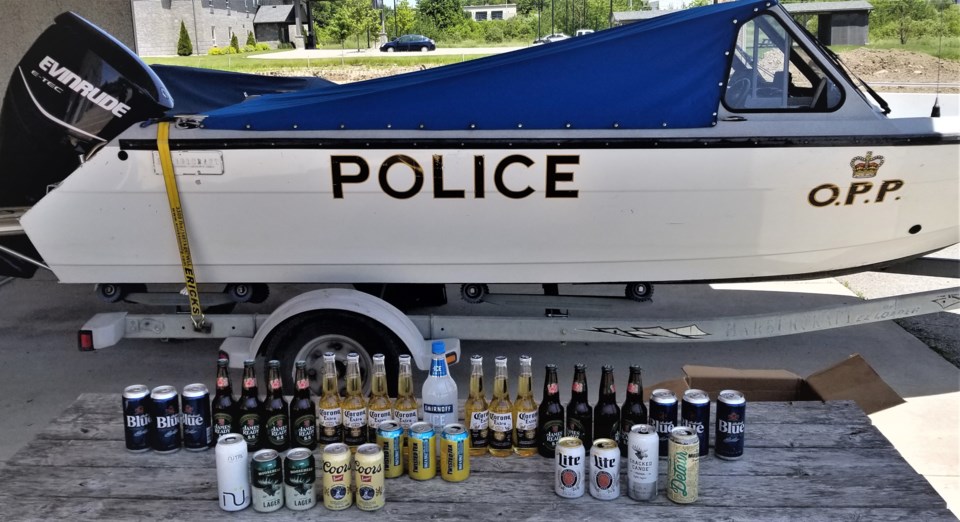 This photo shows some of the alcohol seized in the wake of an incident in Honey Harbour this weekend. OPP Photo

NEWS RELEASE
ONTARIO PROVINCIAL POLICE
*************************
MIDLAND - Members of the OPP Marine Unit attached to the Southern Georgian Bay Detachment of the Ontario Provincial Police (OPP) say 'alcohol and boating never mix' and those words rang true over the past weekend.

OPP marine officers logged 20.5 hours of patrol during June 21-23, 2019 on the waters of Georgian Bay checking 65 vessels for required safety equipment and operator sobriety along with responding to eight calls for service.

Officers issued 11 offence notices to marine operators who were cited for their vessel equipment deficiencies including four operators not having enough life jackets for all persons aboard the vessel and two other charges under the Canada Shipping Act. The disturbing statistic is that five operators were charged under the Liquor Licence Act of Ontario offences.

At 6:18 p.m. June 21, 2019 marine officers checked a vessel in Bide-A-Wee channel in Honey Harbour as it appeared to be overloaded. Officers spoke with the operator and checked the vessel for equipment, especially lifejackets, for the five adults in the 14' vessel.

The resulting investigation lead to the vessel and occupants being taken to a nearby shore landing as the operator was arrested for further investigation into a drinking and driving offence and there were not enough lifejackets aboard for the occupants and insufficient safety equipment aboard the vessel.

The investigation resulted in the male vessel operator- Mackenzie Irwin, 19 years of Toronto, being charged with:

He was released from police custody on a recognizance to appear before the Ontario Court of Justice in Midland on July 4, 2019. Although he was operating a vessel at the time of the offence his drivers licence is suspended for 90 days under the conditions of the Administrative Drivers Licence Suspension (ADLS) program.

Vessel operators are reminded to observe the applicable sections of the Liquor Licence Act of Ontario when out on your vessel with friends and family because "Impaired Boating is Impaired Driving!" Please see the attached MADD CanadaMessage.

Please view the following for clarity of the offence of Having care and control of a boat underway with open container of liquor contrary to the Liquor Licence Act of Ontario.

(4) Subsection (3) does not apply if the liquor in the boat,

(a) is in a container that is unopened and the seal unbroken; or

Police remind vessel operators that an essential part our enforcement effort is to save lives and reduce injuries on our waterways while promoting and educating the public about safe boating practices.