The realities of dementia can be daunting, say local seniors

Diagnosis of Alzheimer's disease brought sadness; 'Then I thought, you have to look it in the face and just get on with life. There's nothing I can do about it'
Mar 3, 2020 1:45 PM By: Mehreen Shahid 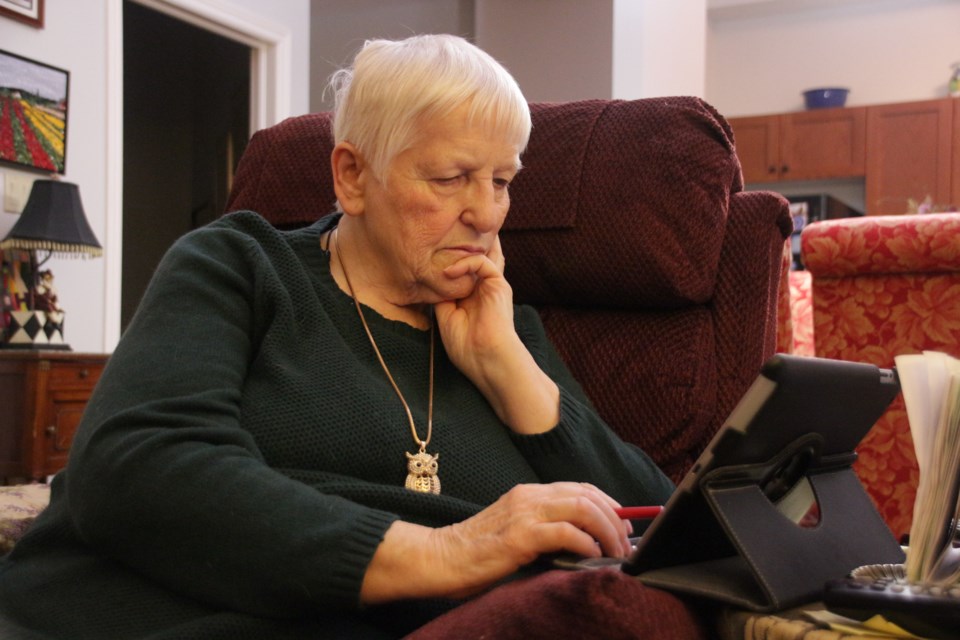 Mary Armitage, 79, was diagnosed with Alzheimer’s last year. She says she doesn’t want to let it change her and encourages people to reach out to support those who have received diagnoses. Mehreen Shahid/OrilliaMatters

Mary Armitage loves to make jokes and kid around with her friends, but over the last couple of years there have been fewer things to laugh about.

Sometimes, she is forced to pause and search for words that used to be part of her daily vocabulary.

“When I got stuck I would try to gesture. Some got it and some didn't,” said the 79-year-old.

Then there was the confusion.

“On Friday, I thought it was Saturday,” said Armitage. “Then I talked to my friend who gives me a ride to church and that led me to think it was Sunday. So I put my Sunday clothes on and sat downstairs. My friend came by and said it's not Sunday, it's Saturday.”

There was also the general forgetfulness.

“I've forgotten my chiropodist appointments many times,” she said. “I almost think he's going to fire me, but he laughs so I'm glad he still sees me.”

Grocery shopping would take her a minimum of two hours. She would make lists but forget them at home. At home, she would misplace things.

Armitage said she was also feeling a loss of motivation to complete tasks.

“When I'm in the kitchen I can't tell how many utensils I've dropped,” she said. “I will think about starting some food and then I'll lose the idea that I was going to start with.”

The general forgetfulness, a loss of motivation to complete tasks around the house, and inability to find words concerned Armitage. The doctor confirmed her fears: last year, she was diagnosed with Alzheimer’s disease.

“I knew well ahead of time what the problem was,” she said. “You can't avoid it.”

Armitage said she felt very sad initially, even though she wanted to be matter-of-fact about it.

“I'd rather I didn't have it,” she said with a chuckle.

On the other hand, the diagnosis relieved her. Now she’s enrolled in a program with Senior Care that helps her with some brain and physical exercises and education on her condition.

“I found that for the first couple of courses, I was kind of rattled,” she said. “Then I thought, you have to look it in the face and just get on with life. There's nothing I can do about it.”

Armitage said she’s had a full life. Moving from Holland to Canada, her parents brought her and her nine siblings to Orillia. The family then moved to Toronto when Armitage was 19.

She had to drop out of high school to get a job to help out at home.

She took courses and started working as a secretary. Then she went back to school for a law degree and eventually retired as a justice of peace.

“I loved it; I loved it all,” said Armitage, who moved back to Orillia 14 years ago.

Nowadays, she spends her time going to church on Sundays, visiting a restaurant with a friend at least once a week; she stays occupied with her cat Vienna.

Armitage says it's important to not isolate people with Alzheimer’s but to have a conversation with them to understand what they’re feeling.

“If possible, take me out for lunch or coffee,” she said. “It's always cozy when you go for one-on-one lunch and you can speak to each other. And they can come in and wash my dishes for me anytime,” added Armitage with a laugh.

Where Armitage is able to live on her own because her Alzheimer’s is at an early stage, Ruth Leistner’s mother doesn’t have the same luxury.

She and her family first noticed the change in their mother’s behaviour nine years ago when their father died.

“We would go out before and we noticed she couldn't remember where she'd put things,” said Leistner, talking about her mother’s diagnosis of dementia. “We thought it was lack of stimulation. We found out later, after dad passed away, that it wasn't the case.”

At that time, the condition was manageable. So Leistner would stay over at her mother’s place every night.

“Come November, she didn't want me to come out at night and I didn't want her to be by herself, so I brought her to my place in Orillia,” she said.

At first, it wasn't bad, Leistner said; her mother could still look after herself. Over time, her condition worsened.

“Now she has a lot of trouble remembering,” she said. “It's like taking care of a two-year-old. I have to keep an eye on her…constantly. I have to make sure she uses her walker when she stands.

“If she can't see me, she gets anxious and tries to get up and find me,” added Leistner. “So I have to stay within sight. She doesn't like being left by herself.”

Her mother, 92, also has COPD and has an oxygen supply connected to her nose.

Having to constantly care for her mother makes Leistner sad.

“It's sad to see somebody regress to a child-like state,” she said. “We used to do 1,000-piece puzzles. Now we're down to 24-piece puzzles. She loves doing those.”

As a caretaker, Leistner said, the routine becomes very confining.

“I don't see friends very much anymore,” she said. “I don't go places anymore and she's to the point where she's in need of constant supervision and help.”

The one place that gives her the most support is the Alzheimer’s Support Group Leistner attends once a month.

“It's fantastic,” she said. “I love it. It's a place you can vent and it doesn't leave that room. You know you're with people that are in similar situations. I've come to learn so much and how you deal with it.”

Leistner takes strength from the feedback and suggestions shared in the group. It gives her a chance to reset before she goes back to tending for her mother.

“It's a journey,” she said. “It's one I feel God has given me. And I will do it as long as I can. I don't want to put her in a nursing home. She doesn't want to go there. So I pray God takes her before it comes to that.”

According to the Alzheimer Society Simcoe County, there are more than 9,600 people in Simcoe County that have been diagnosed with Alzheimer’s. These numbers are fairly conservative because there may be many people who haven’t received a diagnosis because of fear and stigma.

Dana Bessette, education coordinator, Alzheimer Society of Simcoe County, explains that dementia is an umbrella term for a set of symptoms, and Alzheimer's is the most common type of dementia.

Some common symptoms could be memory challenges, something that's not normally presented. Forgetting a long-standing lunch date you've had with someone for years.

“This is different than regular normal memory changes we may experience with aging,” said Bessette. “It may not be as sharp as it once was, because it takes more time to find that piece of information in our brain. With dementia, we're just not going to be able to recall that the information was ever there to begin with.”

Communication is affected, too. The inability to carry on a conversation because they may not be able to comprehend words or find words they want to use.

For those living with dementia, every-day tasks become a struggle. Alzheimer’s also affects physical coordination; large or small motor skills, such as using a toothbrush, combing your hair, and signing your name.

“Our brain is responsible for everything we do and at some point, if it's a true dementia, all those functions will also decline,” said Bessette.

If people are doing a really good job of taking care of their brain and living a brain-healthy lifestyle, then their chances of getting the most common type of Alzheimer's are much less, she said.

However, there are no guarantees.

“We could be doing all the right things and still develop dementia, or vice versa,” said Bessette. “Recommendations are saying the best course of action for us right now, because it's incurable, is to lead a brain-healthy lifestyle, even if you're living with dementia.”

Community Connections at 211 provides the caller with information over the phone, community specific.

You can also check out the World Health Organization, Risk Reduction of Cognitive Decline and Dementia report.

When dealing with death, a sense of humour helps: local seniors
Feb 4, 2020 12:30 PM
Comments
We welcome your feedback and encourage you to share your thoughts. We ask that you be respectful of others and their points of view, refrain from personal attacks and stay on topic. To learn about our commenting policies and how we moderate, please read our Community Guidelines.