US retail sales rise for 3rd month but slowdown expected

WASHINGTON — Americans increased their spending at retail stores and restaurants in July for a third straight month, but some evidence suggests that sales are weakening with the expiration of government rescue aid that had previously put more money i
Aug 14, 2020 2:22 PM By: Canadian Press 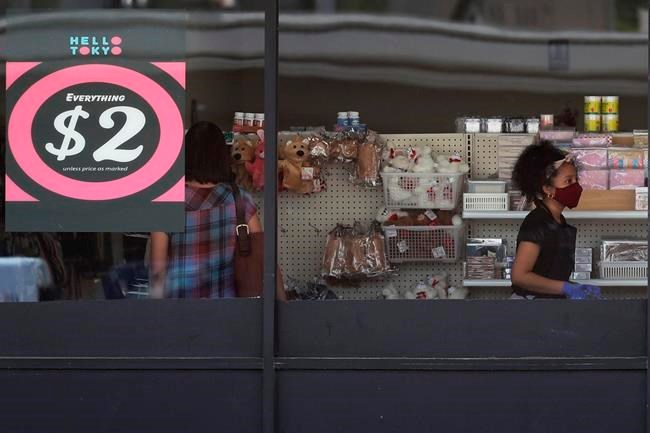 WASHINGTON — Americans increased their spending at retail stores and restaurants in July for a third straight month, but some evidence suggests that sales are weakening with the expiration of government rescue aid that had previously put more money in people's pockets.

Friday's report from the Commerce Department showed that retail purchases rose by a seasonally adjusted 1.2% last month. The gains of the past three months have now restored retail purchases to their levels before they plunged in March and April when the pandemic shuttered businesses and paralyzed the economy.

Yet with Americans’ overall income now likely shrinking, economists expect spending to slow further. July's sales increase was much smaller than May's 18.3% gain and June's 8.4% increase, when shoppers flocked to newly reopened businesses. In July, the viral outbreak re-surged in much of the nation, forcing some businesses to shut down again.

Sales at restaurants and bars grew 5% last month after much more robust increases of more than 30% in May and 27% in June. Restaurant and bar revenue remains about one-fifth below its levels of a year ago.

Solid sales gains were posted last month at electronics and appliances stores, reflecting the needs of mostly higher-income people who are now working from home. Purchases at clothing stores, gas stations, and drugstores also rose. Furniture sales were flat after a huge gain in June.

The problem now is that roughly 28 million laid-off workers are no longer receiving a $600-a-week federal unemployment check that they had received in addition to their state benefit but that lapsed last month. In addition, a $1,200 stimulus check that was sent to many Americans in April and May likely won't be repeated. Negotiations in Congress on a new economic relief package have collapsed in and show no sign of restarting anytime soon.

Many retailers have said the supplemental unemployment aid had helped spur sales of clothes and other non-discretionary items in the spring and early summer.

“Consumers have been largely shielded from economic realities by the various stimulus and benefit programs,” said Neil Saunders, managing director of GlobalData Retail. “However, many of those advantages expired at the end of July, and August will be the first month when the chill winds of economic turmoil hits many households.”

Consumers had started to cut back on spending in late July, according to a GlobalData survey, and spending fell sharply in the first week of August. Many consumers are spending more around the home and on recreational equipment while still maintaining a nervous outlook.

Jennifer Zaspel and her husband, who live in Milwaukee, recently bought a $2,000 bike and are having a patio built in their backyard. Still, Zaspel, a 33-year-old psychiatrist, said her full pay was just reinstated after the academic institution she works for had temporarily cut her pay in a cost-saving move. Fearful of another wave of viral cases, she intends to rein in her spending.

“We are going to continue to keep things fairly tight just because I am anticipating another surge,” said Zaspel, who buys second-hand clothing and toys for her 7-month old son.

Friday's report on retail sales captures only about one-third of all consumer spending. The rest involves services — from haircuts and gym memberships to movie tickets and hotel rooms — all of which were hit disproportionately hard by the pandemic and have yet to recover

In the April-June quarter, consumer spending collapsed by a record amount, causing the economy to shrink at a previously unheard-of annual rate of 32.9%. Economists have forecast that growth is rebounding in the July-September quarter at a roughly 20% annual rate, though that pace would still leave the economy far below pre-pandemic levels.

The government's figures mask a huge shakeout in the retail industry, with Americans pulling sharply back on in-person shopping and spending more online. More than 40 retailers have filed for bankruptcy protection this year, about half of them since the pandemic. That’s about double the number for all of 2019.

In recent weeks, Ann Taylor's parent company declared bankruptcy. So did the Lord & Taylor department store chain and the discount store chain Stein Mart, which had been in business for 112 years.

Stein Mart cited the resurgence of coronavirus cases in Florida, Texas and California as a key factor in its bankruptcy filing. The company has many stores in those states, a fact that hurt customer traffic and drained its cash. And Rent the Runway, the fashion rental pioneer, confirmed Friday that it will be closing all five of its stores for good as it focuses on expanding its drop-off boxes.

The upscale outdoor CityPlace Doral mall in Miami had closed in March, reopened in May and then enjoyed strong sales and traffic in June, according to Mauro Olivieri, the mall’s general manager of the upscale outdoor mall. When the virus resurged in July, local mandates forced it to close indoor dining.

President Donald Trump has signed an executive order that would replace the now-lapsed $600 a week in federal jobless aid with $300 a week from a disaster relief fund. Yet that would require the states to establish a separate payment system that would likely take weeks. In the meantime, the loss of the $600 will cut recipients’ income, on average, by one-half to three-quarters.

That prospect has unnerved Tia Ferguson. A 40-year-old substitute teacher in Columbus, Ohio, Ferguson was laid off in March. Beginning in June, she managed to receive both her state’s unemployment benefit and the $600 federal check. It’s unclear when she might be recalled to work, and she is reluctant to teach in person until after a vaccine is approved. A diabetes and asthma patient, she worries about the risks of returning to the classroom.

Ferguson’s husband earns income as an auto mechanic but is still building a business that he recently started. The couple has taken to reducing their three kids’ video game time to save on electricity.

With her weekly jobless aid now just $171, Ferguson has cut back on groceries and gone on Facebook to find information on food pantries.

“I don’t know when I’ll have a steady stream of income that’s even close to what I was making,” she said.

Debate veers from 'How you doing?' to 'Will you shut up?'
Sep 30, 2020 12:27 AM
Comments
We welcome your feedback and encourage you to share your thoughts. We ask that you be respectful of others and their points of view, refrain from personal attacks and stay on topic. To learn about our commenting policies and how we moderate, please read our Community Guidelines.