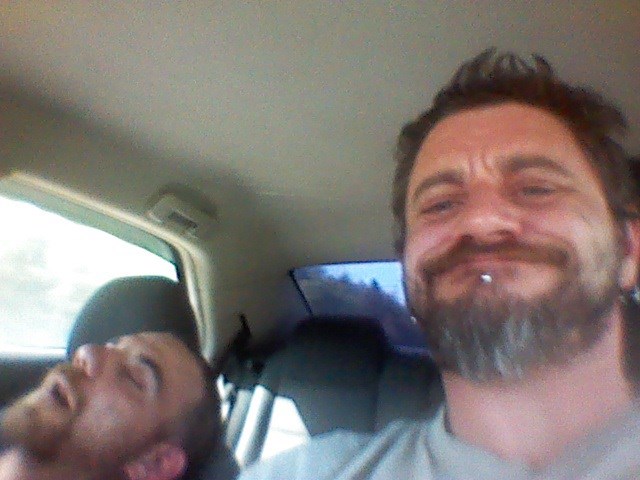 A picture taken on the Motorola XT owned by Martin Forget, showing Forget (right) and Quesnel. The photo was taken on June 4, 2017 at 9:17 a.m. It had been deleted from the phone, but was recovered by an OPP digital forensic investigator. OPP evidence photo

In a nearly-full Barrie courtroom on Tuesday afternoon, assistant Crown attorney Mike Flosman put the pieces together for a jury in the case of a shooting death that rocked Orillia on June 4, 2017.

Flosman delivered the Crown’s closing submissions on Tuesday afternoon, weaving a tale of intent, vengeance and violence that led to the death of Orillia's Joseph Simonds.

Martin Forget and Brian Quesnel are facing first-degree murder charges for the crime.

Sonny Brokenshire was a key witness in the case. His testimony spanned two days of the trial and outlined the evolution and escalation of events that led to the death of Simonds, who was shot and died in his Franklin Street home that night.

“In the end, there’s one question you have to ask yourself,” Flosman said to the jury. “How do you know (Brokenshire) was telling the truth?”

Brokenshire fathered his first child with Brandie Lalonde when he was 17 years old, the jury heard earlier in the trial. In April 2017, Lalonde was dating Joseph Simonds when Brokenshire was told by Lalonde’s mother that his then three-year-old daughter said Simonds had touched her inappropriately.

Quebec authorities were called and investigated. On May 12, 2017, the family was told the allegations were deemed unfounded.

That same day, Lalonde’s stepfather, Forget, contacted Brokenshire. Quesnel was dating Lalonde at the time the allegations were deemed unfounded.

“Not a word... how do I track him without raising suspicious activity,” wrote Forget to Brokenshire on May 12, 2017. “Dead serious.”

Facebook Messenger conversations between all parties showing escalating tensions throughout that month were shared with the jury during the trial.

Forget and Quesnel made two visits to Orillia to try to track down Simonds. Brokenshire said he was under the impression that the three were planning to beat up Simonds, but the plan changed in the moment once they were at the door.

Brokenshire testified that Quesnel pushed Brokenshire aside at Simonds’ door and shot Simonds with a 20-gauge shotgun, before the three fled in Forget’s black Chrysler 300.

In regards to Brokenshire’s initial statement to police, Flosman said there are factors to take into consideration.

“Much will be said by the defence about his motives. There’s a significant amount of evidence that agrees with his testimony,” said Flosman. “Yes, he lied, and that’s not good. He was a 21-year-old kid who just found out his girlfriend was pregnant.”

“He perhaps, understandably, didn’t want to implicate himself or others. Sonny pleaded guilty to a lesser offence, but keep in mind, he was a follower,” he said.

Flosman added that Brokenshire was never shaken by the defence during cross-examination.

“If you have doubts about what someone is telling you, look at the surrounding circumstance. I implore you to look at the other evidence. I submit that when you do, you will find it overwhelmingly agrees with the testimony of Sonny Brokenshire,” he said.

In regards to the matching tattoos Quesnel and Forget had done the day leading up to the murder, Flosman said it’s his position the tattoos were a way to avoid suspicion.

“They were part of the plan. A good alibi,” he said to the jury.

Flosman went through the timeline of events, making links between Brokenshire’s testimony and the testimony of other witnesses such as Beonca Jeffries, Tyler Down, Roger Ranger, forensic investigators and OPP officers involved in the investigation.

“In short, there is significant evidence to corroborate every part of Brokenshire’s testimony,” he said.

Flosman concluded by summing up the Crown’s overall position on what happened in May and June of 2017.

“From the time he found out no (sexual assault) charge was laid, until the time Joe Simonds died, Mr. Forget had one plan, and one plan only. We can see the plan, and the intent. On June 4, 2017 at a little after 3:30 in the morning, Mr. Quesnel shot Joe Simonds in the chest with the guidance, approval and assistance of Martin Forget,” said Flosman.

The defence will deliver their closing arguments on Wednesday.